Extreme athlete Jaimie Monahan, MILR ’03, has swum all over the world, from Antarctica to Argentina to Australia. But when the coronavirus pandemic put a hold on her travels this summer, she decided to stay close to her apartment in New York City’s West Village. Monahan didn’t stop swimming in open water, though. In fact, she set a major goal: to do as many laps around Manhattan Island as possible. By the end of August, she’d swum the twenty-eight-mile loop an unprecedented seven times in seven days (her best time: 7 hours, 53 minutes). Less than a month later, Monahan hit a cumulative career total of twenty-seven swims around Manhattan—surpassing the previous career record of twenty-three set in 1999. “The great thing is that this route starts and ends about a mile from my home,” she says. “So I have this amazing, challenging swim right in my own backyard.”

A seven-time U.S. national champion in winter swimming (defined as open-water swimming in cold conditions), Monahan is used to pushing boundaries. Recently profiled in the book Strong Like Her—which features portraits of inspiring female athletes in sports from fencing to bodybuilding—the forty-one-year-old has been inducted into both the International Marathon Swimming Hall of Fame and the International Ice Swimming Hall of Fame. In 2018, she set a Guinness World Record for the fastest time to complete six marathon swims on six continents in sixteen days. The year before that, she became the first person to complete the “Ice Sevens Challenge,” in which swimmers have just over a year to complete seven one-mile swims on all seven continents in waters below 41 degrees Fahrenheit. That included a mile in the coldest water Monahan had ever been in: an ice pool cut into a frozen lake in Tyumen, Russia—a city in the Siberian tundra—where the water hovered around 32 degrees and the air had a wind chill of minus 24. To acclimatize her body to such frigid conditions, Monahan says it’s key to swim in cold water at least once a week. “I like to get into the water as fast as possible,” she says. “Some people like to walk in and almost numb themselves first, but that’s not my style.”

Throughout her career, Monahan has set records in some of the most stunning places on the planet. She’s swum through a rainstorm in Singapore, past the breathtaking beaches and cliffs of Sydney, with penguins in the Antarctic, and alongside icebergs in New Zealand. For long-distance swims, Monahan is accompanied by a small support team to keep her safe and on course; her longtime partner usually travels alongside her in a kayak to monitor her progress and document the journeys. These swims can be mentally and physically draining—a jellyfish sting once left her hand temporarily paralyzed during a swim in Alexandria, Egypt—and the trips take a lot of careful planning. For her final mile of the Ice Sevens Challenge, Monahan flew to South America three times before finding a spot that met the challenge’s specific requirements, finally achieving the feat by swimming the famed Beagle Channel in Patagonia. 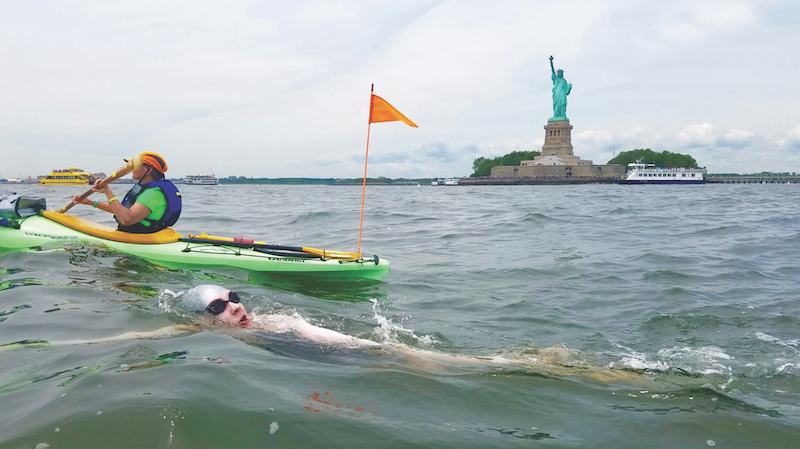 Monahan competing in an annual seventeen-mile swim marathon from Manhattan to Coney Island in 2017. Arik Thormahlen

Plus, Monahan has to fit in training and traveling around the demands of a full-time career: earlier this year she started a new position as the U.S. head of campus recruitment for Scotiabank, after twelve years at Deloitte Consulting. “When you’re working really hard at your day job,” she says, “it gives you something to look forward to.” Her training regimen includes swimming some twenty miles per week in indoor pools, either before or after work. (As she notes, New York City’s rivers aren’t practical for daily training, both because the current is so strong and because doing so would require permission from maritime authorities.) She does swim outdoors at least once a week—in the Coney Island/Brighton Beach area—to stay acclimatized to the cold water, and also keeps in shape with yoga and high-intensity interval training.

Monahan has been a swimmer for as long as she can remember, competing in high school and as an undergrad at SUNY Geneseo, where she studied communication. She didn’t get interested in open-water swimming until after earning a master’s degree from the ILR school, when she signed up for a 2008 triathlon that included a swim in the choppy, icy-cold seas near Alcatraz Island off San Francisco. A year later, she swam the twenty-one-mile English Channel in just under sixteen hours.

In 2014, Monahan discovered ice swimming, a tradition that stretches back centuries in countries like Finland and Russia, but only became an organized sport in 2009 with the founding of the International Ice Swimming Association. The group has more than 2,500 members from around the world; last year, about 400 swimmers from more than thirty countries competed in the sport’s world championships. The rules are strict: athletes may only wear a standard swimsuit, a bathing cap, and one pair of goggles—no wetsuits or neoprene caps allowed.

Possible health dangers of extreme cold-water swimming include hypothermia and difficulty breathing, and the association takes those risks seriously. All swimmers must have their heart rate, blood pressure, and resting EKG taken before a swim, and a medical doctor with experience in the sport is always on hand during events. But Monahan doesn’t consider herself a thrill seeker. As she said during a TEDx talk she gave last year, the sport appealed to her because she believes that pursuing difficult personal challenges can only improve your life. “It’s really rare in this day and age to get the opportunity to do something that hasn’t been done before,” she says. “For me, ice swimming is almost like a new frontier.” 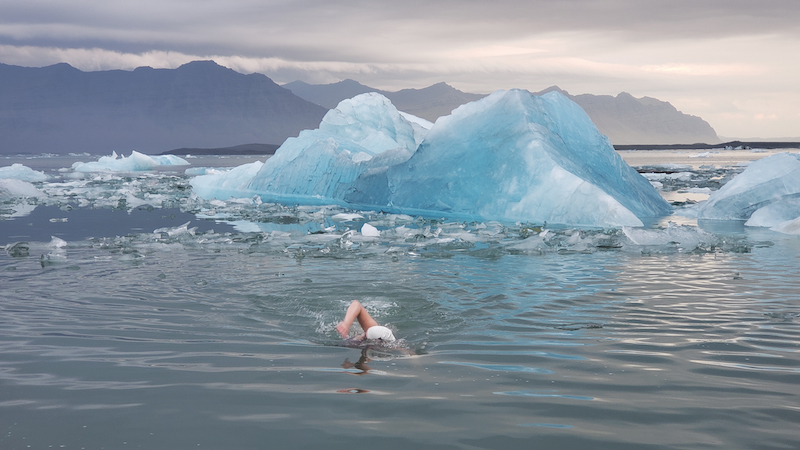 Monahan training in ice swimming in Iceland in 2019.Arik Thormahlen