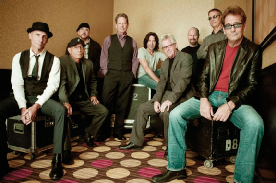 When he enrolled in the Engineering college, he was Hugh Anthony Cregg '72, a bright kid who had grown up in Marin County, California, and gone to prep school in New Jersey. He stuck around for a couple of years, enjoying the late-Sixties scene in Ithaca, before packing up his harmonicas and heading back to the Bay Area. Then he joined a band and changed his name to Huey Lewis. After an unsuccessful foray into the English pub-rock scene, he returned to California and settled in with some local players in a band called Huey Lewis and the News. They had some big hits—"Heart and Soul," "The Power of Love," "I Want a New Drug"—and released eight albums between 1980 and 2001.

The band is now "semi-retired," but they traveled to Ardent Studios in Memphis last year to cut a new album, Soulsville, for W.O.W. Records. It has no new material—instead, it's a collection of tunes from the catalogue of Stax Records, the soul music label from the Sixties that was the home of Otis Redding, Johnnie Taylor, the Staple Singers, Booker T. and the MGs, and many other outstanding artists. In a way, it's a throwback to the music that was in the air when young Mr. Cregg was at Cornell—and it sounds great.

Wisely, Lewis and his band-mates avoided the familiar Stax hits and chose lesser-known gems like Eddie Floyd's "Never Found a Girl," Rufus Thomas's "Little Sally Walker," and Wilson Pickett's "Don't Let the Green Grass Fool You." The playing is heartfelt and solidly in the groove, the production is crisp, and Huey is in fine voice throughout. All in all, it's a terrific effort that takes us back in time while still sounding fresh and contemporary.