It's shortly after 7 a.m. on June 30, 1908. A man in a remote Russian region suddenly feels a wave of heat, moments before hearing a thunderous bang in the fire-lit sky and being thrown twenty feet from his porch chair. That's how the Tunguska explosion felt—forty miles from ground zero. 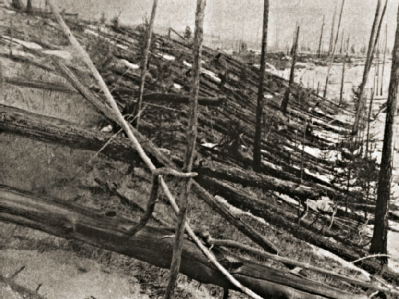 A century after the baffling event leveled 830 square miles of Siberian forest, the mystery endured—with explanations ranging from comets to meteors to black holes to extraterrestrials and even the wrath of God. The first scientific expedition to the barren site didn't occur until 1927. But now, a research team (including engineering professors Michael Kelley and Charles Seyler and former grad student Miguel Larsen, PhD '79) has finally solved it. Their paper, published in Geophysical Research Letters, reveals that a comet exploding in the earth's atmosphere caused the blast.

The conclusion stems from a link between two seemingly unrelated events: the Tunguska explosion and the launch of a NASA space shuttle. Days after each, witnesses saw bright, night-visible noctilucent clouds thousands of miles away. Accounts of the Tunguska event reveal that the sky shone brightly for several days more than 3,000 miles from the impact site. Noctilu-cent clouds were also observed after the launches of several NASA shuttles, including the Endeavor in 2007. Kelley concludes that the Tunguska comet would have started to break up at the same altitude as the release of the shuttle's exhaust plume.

Made up of ice formed on the surface of exhaust and dust particles, noctilucent clouds occur only at high altitudes. The researchers believe that water vapor discharged into the atmosphere by a comet's icy center was caught up in a vortex of immense energy in a process called two-dimensional turbulence, traveling at speeds of nearly 300 feet per second—which explains why the clouds formed thousands of miles away. "It's like solving a murder mystery," says Kelley. "We were finishing a puzzle. The pieces were there, but we put them together."