Student entrepreneur hopes her sunscreen machine is a hot seller

Student entrepreneur hopes her sunscreen machine is a hot seller

Clouds, as the saying goes, come to die in Ithaca—that bastion of gray skies where sun-bathing is largely an indoor sport. The city is an unlikely birthplace for SnappyScreen, a sunblock application system that's having a trial run at an Aruban resort this summer. 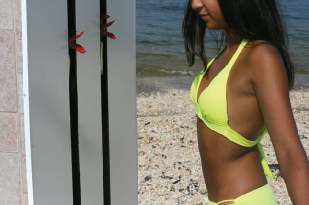 SnappyScreen doesn't come in a tube or bottle. It's a device, invented and patented by ILR student Kristen McClellan '12, that airbrushes an even coat of lotion onto the body. Think of it as a sunscreen shower. Users step inside a seven-foot-high semi-circular booth and select the grade of UV protection. Eyes closed, they rotate as vertical rows of nozzles mist them evenly; no slathering on of creams, no end-of-the-day blotches. One application would cost about $2, says McClellan, who plans to donate a percentage of her profits to the Melanoma Research Foundation.

A native of Locust Valley, New York, McClellan got her business start as a youngster selling lemonade, handicrafts, and snails harvested from Long Island Sound. At twelve, she co-founded a neighborhood "day camp" babysitting service that netted as much as $1,000 a week. The idea for SnappyScreen came to the fair-skinned entrepreneur as a senior in high school, after she and her sister lamented how long it took to slather on sun-block for a trip to the beach. "On a vacation, time is really important," says McClellan. "People can spend up to an hour applying sunscreen to themselves and their kids." She got help building the initial SnappyScreen prototype from a neighbor, a retired engineer; they constructed it from scratch in her family's driveway. "I wanted something resembling an outdoor beach shower," she says, "the kind you use to wash sand off your feet."

Last fall, SnappyScreen earned McClellan a spot as a finalist in a national young entrepreneurs' competition sponsored by the New York Stock Exchange and mtvU, a channel available on some 800 campuses. She appeared on its "Movers & Changers" show in December, missing out on the $25,000 grand prize but garnering $5,000 toward marketing and producing her latest prototype. She got some help in developing the business from eLab, a Collegetown startup incubator run by Student Agencies; open to all Cornell students, it has a dozen projects in various stages of progress at any given time. So far, says eLab adviser Daniel Cohen, the three-year-old facility has nurtured seven revenue-generating companies, including a file-hosting service and a penny auction site. "Kristen's concept has a good chance of making it," says Cohen, a human resources lecturer in the ILR school. "She's at the stage where she's ready to launch her prototype. That's when you find out if the market is there."