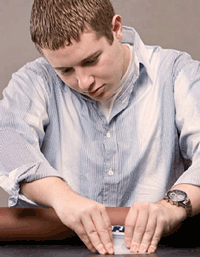 When Brian Hastings ’10 was a high school student dabbling in online poker, he and his parents didn’t see eye to eye about his card-playing passion. “They’re pretty conservative and Catholic. They don’t gamble at all. So they were kind of anti-poker at first,” says the twenty-two-year-old native of Hanover Township, Pennsylvania, just west of Wilkes-Barre. “But once I proved to them that it was more of a ‘feel game’ than a gambling game—and that I was winning money through hard work—they kind of came around.”

As Hastings told his parents, at its highest levels poker is a game of chance only in terms of what cards are dealt; beyond that, success comes from preparation, observation, experience, and instinct. “There is short-term luck involved, but in the long term it’s skill,” says Hastings, who’ll graduate in December after taking an extra semester to complete his economics degree. “The fact that I was consistently winning money every month was pretty good evidence of that.”

Let’s be honest: Hastings has been winning lots of money. Last December, during a five-hour, one-on-one session against a mysterious Swedish player with a high bankroll and a penchant for risk, Hastings raked in $4.18 million. Yes, you read that right; it is believed to be the most lucrative payday in online poker history. So how do Mom and Dad feel now? Says Hastings: “They’re very happy that I’ve been so successful with it.”

Gee, ya think? Even before he made poker history, his winnings had allowed him to pay his college tuition and buy a house in Collegetown, where he sits in front of the computer and pursues his profitable passion for roughly ten hours each week. In the world of elite poker, that isn’t much time. Hastings—who has a girlfriend and is a member of Phi Kappa Psi fraternity—actually has a life outside the game. But like a basketball phenom delaying entry to the NBA, he is often asked why he has stayed in school. “The college experience was definitely something I wanted to have,” says Hastings. “I’m still not sure that I want to do poker as a long-term thing, so getting a degree will keep my options open. I like a lot of my classes, and I like to learn.”

If poker is any indication, he’s a quick study. Hastings began playing seriously as a junior in high school, inspired by a math teacher who competed on the website UltimateBet.com. Hastings began by depositing $50 in an online account, usually playing no-limit Texas Hold ‘Em for a $10 buy-in and five- and ten-cent blinds (forced preliminary bets, which rotate around the table). For about six months, he basically broke even. “Then I began to take the game seriously, reading strategy forums and trying to improve, says Hastings, who joined CardRunners.com, a poker training website offering pro-player blogs and instructional videos. He quickly made money, but instead of cashing out his winnings, he focused on growing his bankroll and moving up in the stakes. By the end of his senior year in high school, Hastings had compiled a bankroll of roughly $250,000. These days he occasionally plays in games with blinds as high as $1,000 per hand.

In the four years in which he has balanced college and cards, Hastings has become, in the words of a columnist for BluffMagazine.com, “one of the top three online players in the world right now, if not the best.” He has a minority ownership stake in CardRunners and competes on FullTiltPoker.com as a sponsored professional; he is paid to play ($35 an hour) and retains 100 percent of his rake, meaning he doesn’t lose his portion of the pot that goes to the website. Even before his now-legendary head-to-head session, his career winnings had reached seven figures.

But on December 8, while playing a game called Pot Limit Omaha, he broke the record. Playing six simultaneous hands against the anonymous Swede (who goes by the online handle Isildur1) at a virtually nonstop pace, Hastings found himself down more than $1 million after the first hour. But Hastings had an advantage; like a college basketball team analyzing game films, he and two CardRunners colleagues had intensely studied Isildur’s playing style. (This touched off a brief flurry of controversy, as some in the online poker community wondered whether they’d violated FullTiltPoker’s rules, although Hastings was never reprimanded.) “I knew that when Isildur would lose a few pots he’d tilt—start playing more aggressively, at detriment to him,” says Hastings, who claims to have further honed his skills by taking a course on game theory at Cornell. “I thought I could take advantage of that.”

That’s exactly what happened. The cards turned Hastings’s way, Isildur1 tilted, and when the dust settled (after five hours and nearly 3,000 hands), Hastings was up more than $4 million. A percentage of the money goes to his CardRunners colleagues, with whom he often splits the action in high-stakes sessions to reduce risk—but suffice it to say that Hastings has been buying drinks for his buddies in Collegetown. He also sent his parents on a trip to Italy and has contributed a portion of his winnings to Kiva, a nonprofit that facilitates global microfinancing loans. “I was lucky in the match,” he says, “but I also outplayed him pretty solidly.”

Naturally, Isildur1 wanted a chance to make his money back. So in March, the Cornell senior and the Swedish mystery man faced off again. This time, Hastings didn’t do quite as well. He only won $1.5 million.