For Young Alumni, Undergrad Was Just the Beginning 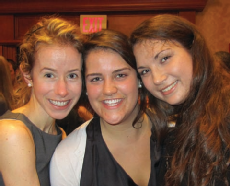 On May 29, Cornell's alumni ranks grew as more than 3,500 undergraduates and 2,500 grad students became alumni. While this glorious transition has happened annually for nearly 150 years, the benefits and opportunities available to Cornell alumni in the "real world" aren't always apparent to new graduates. "During my time as a student, Cornell seemed like a massive and overwhelming community that engages the majority of your time, passion, and interests," says Mike McDermott '09, co-president of his class and a law student at Boston College. "Becoming a member of the alumni community is seen more as an unwanted finish line—who wants to leave Cornell?"

McDermott's attitude about alumni involvement changed his final year of undergrad, when he volunteered for the Senior Class Campaign. "Through the campaign and my work with the alumni community," he says, "I learned that graduation is not the end of life with Cornell." Like many Cornellians, McDermott has kept in touch with his fraternity brothers and teammates. But he has also developed amazing friendships with members of the Class of 2009 he barely knew—or never even met—when he was on campus.

Class co-presidents Stephanie Rigione '10 and Darin Lamar Jones '10 have had similar experiences. Both Rigione (a Boston native) and Jones (who grew up in Florida) are now in New York City, home to 18,000 other Cornell alumni. Rigione has parlayed the skills she gained while working on the Senior Class Campaign into a career in fundraising, while Jones is studying at the Union Theological Seminary. "I thought I would need to work really hard to keep my Cornell connections, but just the opposite has happened," said Rigione, who attends young alumni events, participates in the Cornell Alumni Admissions Ambassadors Network (CAAAN), and hangs out at the Cornell Club-New York. "The network was here—it fell into my lap."

Cornell's role in life after graduation has been on the mind of Alina Zolotareva '11, who serves as co-president of her class. "We love Cornell, but we don't all understand what lies ahead for us," she says. "Some of my classmates think, I'll never see some of these people again. But I now know they're wrong. You will see these people again because there will be plenty of opportunities to do so." 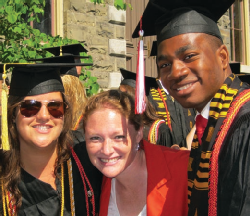 Indeed, helping Cornell's newest alumni stay connected is the task facing Margaux Neiderbach '99, who joined Alumni Affairs and Development as its first director of student and young alumni programs in 2009. Her staff of four includes three young alumni: Pat Burns '09, Corey Earle '07, and Svante Myrick '09. Their mission is to engage Cornellians from orientation to graduation and beyond, with the goal of establishing lifelong relationships. Neiderbach and her team travel across the country producing young alumni events and meeting with graduates. They create opportunities for students to become involved in the alumni world, increase student and alumni interaction, and support young alumni volunteers and leaders in their roles on behalf of the University. In addition, her group oversees the Senior Class Campaign, class programs for alumni up to twenty years out, and reunions for the youngest classes. "I truly enjoy connecting with young alumni, finding out what excites them about the University, and creating opportunities for Cornell to benefit them personally and professionally," Neiderbach says.

To support student and young alumni initiatives, Neiderbach's team depends on the talents of many of its young alumni stars, such as Rebecca Robbins '09, co-president of her class. "It's imperative that we stay connected and that we give back," Robbins says. "But 'I'm giving back' doesn't just mean financially; some classmates are not able to. So we're also thinking of creative ways to engage people to give back in the form of time and talent."

One unique event that Robbins helped manage, with the support of Student and Young Alumni Programs, took place last summer in New York City. Members of the Class of '09 welcomed the Class of '10 to New York with a panel that focused on the transition from student to professional or graduate student. Panelists—who represented a variety of post-Cornell career paths including finance, medical school, law school, accounting, consulting, nonprofits, and marketing—discussed alumni opportunities and life outside of work. After the event, members of the two classes went to a nearby bar to continue networking. "I think it was really successful for both the panelists and the attendees," says Robbins, who is looking into other events to bring her classmates together with other alumni.

The biggest challenge for Student and Young Alumni Programs is getting young graduates to keep their contact information up to date. As they move and change jobs frequently, it can be hard to keep track. "We hear from young alumni all the time who think there aren't activities in their area," Neider-bach says. "Once they update their information, they start to receive event invitations and volunteer opportunities and realize that Cornellians are everywhere and they are quite active."

As Student and Young Alumni Programs develops, it will offer more ways to bring alumni and students together. This summer, for example, networking events will be held for undergrads working as interns in New York City, Boston, and San Francisco. In May, a "Life After Cornell" presentation by alumni leaders offered information on CAAAN, regional club programs, diversity alumni associations, career services, and networking opportunities. The Class of 2011 was also invited to participate in the first-ever "Reunion Zero" on campus two weeks after graduation, featuring a barbecue and opportunities to mingle with the other 6,000 alumni celebrating their reunions.

For the past two years, student leaders have traveled to Washington, D.C., to participate in the Cornell Alumni Leadership Conference. "It was impressive to see 700-plus alumni from so many generations coming together because they enjoy giving back, and knowing that I'll be doing the same," said Jeff Stulmaker '11, co-president of his class. Neiderbach's team is also working with colleagues across the University to invigorate Homecoming Weekend (September 16-18) by adding events specifically for students and young alumni. In addition to producing events, her office partners with regional clubs to develop young alumni groups and has offered the most recent graduating classes a free one-year subscription to Cornell Alumni Magazine.

With engaged young alumni and a talented staff in Ithaca, Cornell can count on the newest generations to step up. "You realize after you graduate that Cornell is more than just a four-year experience," said Rigione. "The alumni experience has so far exceeded my expectations. I've been displaced from Ithaca, but I haven't left Cornell."

It's a Cornell tradition to ask the senior class to fundraise for the next generation, usually through a scholarship or gift to the Annual Fund. This year, Senior Class Campaign co-presidents (and now class presidents) Alina Zolotareva '11 and Jeff Stulmaker '11 added a new dimension. In addition to financial gifts, donations of time and talent were encouraged. "Our theme was 'Time, Talent, and Treasure,' to focus on ways to give back to Cornell through volunteering to benefit the University," says Zolotareva. Students participated in phonathons through the campaign, planted a campus garden, volunteered with mental health and sustainability initiatives, and produced videos (search on YouTube for "161 Things To Do Before Graduating Cornell") that not only prompted giving to the class campaign, but also encouraged students to "Leave Your Mark."

My predecessor, Rolf Frantz '66, ME '67, noted in his final column that during his time in office he'd seen dramatic changes at Cornell. President David Skorton and his wife, Professor Robin Davisson, came to Cornell, and there was a significant reorganization of Alumni Affairs and Development with the arrival of Vice President Charlie Phlegar and Associate Vice President for Alumni Affairs Chris Marshall. Rolf hoped that my tenure would be a bit calmer.

The last two years have been anything but calm as we have navigated an environment of change and growth. As the new Alumni Affairs Strategic Plan emerged and the organizational chart evolved, the role of what was then called the Cornell Alumni Federation became clear. It was our charge to align with the Office of Alumni Affairs to support its mission of engaging alumni. 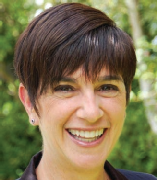 In the first one hundred days, the board overwhelmingly approved a motion to return to the organization's original name, Cornell Alumni Association, to increase its recognition among all alumni. Our next order of business was to collaborate with Alumni Affairs staff, members of the Board of Trustees, and other advisers to reimagine our purpose. We spent time determining the proper structure of the association's board to best represent and serve our member organizations and all alumni. We've made great progress, and I expect that the finishing touches to the governing documents of the organization will be made over the summer.

Led by association vice president Stephanie Keene Fox '89, Shana Mueller '95, and Meg Tallman '92, the Directors from the Regions and members of our training and development committee completed an online toolbox of training materials for board members and regional club leaders. The addition of webinars for training has facilitated communication and allowed volunteers to collaborate in real time.

As the owner of Cornell Alumni Magazine, CAA has worked to publish an award-winning publication that delivers a balanced presentation of Cornell and its alumni. A priority over the last several years has been to seek University support for distribution to all alumni. At the Cornell Alumni Leadership Conference in January, Charlie Phlegar pledged University resources to enable a new digital era for the magazine. My thanks go out to Charlie, Vice President of University Communications Tommy Bruce, CAM editor and publisher Jim Roberts '71, Dick Levine '62, Bill Howard '74, Rolf Frantz, and many other committee members for their tireless efforts.

Additional board priorities include training and development and rewards and recognition. We look forward to working with Laura Denbow and Tina Gourley in identifying volunteer leadership and training opportunities for all alumni. As we seek to recognize our valued volunteers and constituent organizations, we'll collaborate with Beth Hamilton.

The list of opportunities and activities is long, and the 2011-12 board will have plenty of chances to make its mark. I'm thrilled to pass the CAA tiara and baton to the incoming president, my dear friend Stephanie Fox. Stephanie has distinguished herself as a team builder and an admired leader.

It has been an honor to serve on the CAA board for the past thirteen years, and I am looking forward to joining my predecessors (and friends) as a president emerita. In closing, I'd like to thank David Skorton, Charlie Phlegar, Tommy Bruce, Chris Marshall, and Jennifer Lynham Cunningham '92 for their incredible support.

The School of Industrial and Labor Relations honored two of its alumni at a formal awards dinner in March at the Pierre Hotel in Manhattan.

Barry Hartstein '73 received the Judge William B. Groat Alumni Award, given for achievement in the field of industrial relations and support of the school. A partner at Littler Mendelson, PC, Hartstein is a member of the University Council, the ILR Advisory Council, the Committee on Alumni Trustee Nominations, and the executive committee of the ILR Alumni Association.

Also that evening, the Jerome Alpern Distinguished Service Award was presented to Joseph Scelfo '79, MBA '80, executive vice president and chief financial officer at Hess Corporation. The award honors an alumnus who has demonstrated outstanding service and support to the school, and recognizes those whose career accomplishments have been primarily outside the field of industrial and labor relations.

The Cornell Alumni Association has announced the recipients of the 2011 Frank H. T. Rhodes Award for Exemplary Alumni Service. This highest alumni honor, named for Cornell's ninth president, recognizes graduates who have given long-term volunteer service to Cornell throughout their lifetimes to a wide variety of alumni organizations. This year's recipients are Robert Abrams '53, Walter Bruska '50, Anne Estabrook '65, MBA '66, Muriel "Micki" Bertenthal Kuhs '61, Ginny Wallace Panzer '55, and Steven Siegel '68. The awards will be presented at a dinner on Friday night of Homecoming weekend.