Tart fruit back in vogue

A forbidden fruit stages a comeback

Standing in the sunny kitchen of his 150-year-old farmhouse in Trumansburg, Glenhaven Farm proprietor John Tamburello '76 swirls a glass of wine under his nose, sniffing as he ponders the deep purple libation's bouquet. "It's not like chardonnay with its buttery or floral notes," he says. "It's very powerful, extremely strong. Maybe licorice? Very earthy—it's definitely black currant." 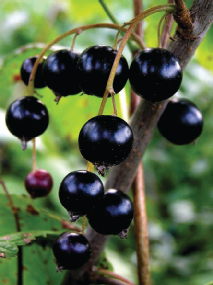 That description might mean something to a native of Scandinavia, where the tart relative of the gooseberry never fell out of favor and has even featured in government-sponsored campaigns touting its myriad health benefits. It's less evocative on this side of the pond, where few Americans have encountered the pea-sized fruit. With an acidity level to rival the cranberry and double the sugar, the juice makes a terrific component of jam, wine, or hard cider; unadulterated, it's an acquired taste. "It will suck your cheeks right in," says the vintner, who tried only once to sell the fresh fruit but still recalls the delight of childhood peanut butter sandwiches slathered with black currant jam. At the Ithaca Farmers' Market, where Tamburello offers free tastings from his hand-corked, hand-labeled bottles, its off-the-charts antioxidant levels and unique flavor make the wine a hot seller.

Having a back-story riddled with political intrigue and bad science doesn't hurt. For more than fifty years, federal law prohibited the planting, cultivation, sale, or transport of the black currant, deemed a public nuisance in 1911 for its role as the intermediate host of a fungus introduced from Asia and threatening white pine plantations. To complete its life cycle, white pine blister rust—which defoliates both the deciduous currant and the lower branches of the white pine—requires a season on fruits in the genus Ribes, which includes 150 species of currants, gooseberries, and ornamentals. 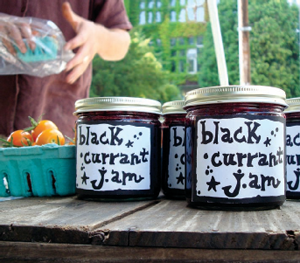 The federal ban—a legacy of the timber lobby's muscle amidst a turn-of-the-century building boom—was lifted in 1966, but New York State kept its own on the books until 2003, when a campaign by a Hudson Valley farmer and Cornell extension agent Steven McKay brought science to bear. "The market value of Ribes in New York State could be higher than the whole pine timber industry," says McKay, who notes that today, rust-immune cultivars and improved management techniques substantially mitigate risk. "Not that we don't need lumber," he says, "but there are places for Ribes and places for pines." Tamburello's 100 Titania currant plants—a patented, rust-immune variety that bears strings of glistening black fruit from mid-July through early September—get a late winter pruning and bear on one- and two-year-old canes. A white pine towers above the nearby farmhouse, but Tamburello says the tree hasn't had any trouble with rust.

Bellwether Hard Cider co-owner Bill Barton, MEng '77, discovered black currant juice through the Geneva Ag Station, where food scientists were helping a Pennsylvania farmer develop recipes for the fruit. "We used a small sample of her juice, tested it with the cider, and it was awesome," says Barton, who buys more than a ton of fruit every year from Penn Yann farmer Curt Rhodes and features the flavor in his Black Magic cider. Rhodes, whose twenty-five-acre spread supplies a half-dozen Finger Lakes vineyards, describes the fruit's flavor as "blueberry with attitude." Barton puts it more bluntly: "You get the first taste, and it's like a slap in the face."

For Rhodes, a fifth-generation farmer who spent most of his career growing commodity vegetable crops on 1,300 acres, the black currant's return to New York has offered a chance to overhaul the business model for the farm, which had teetered just one or two bad-weather years away from ruin. When the family decided to explore value-added products, they contacted associate professor of food processing Olga Padilla-Zakour, PhD '91, director of the New York State Food Venture Program, who worked with Rhodes's sister, Carolyn Sullivan, to develop a jam recipe that incorporates black currant, apple, and English walnut. Last summer, Sullivan sold 3,000 jars at a local farmers' market. Says Rhodes: "These bushes are paying for themselves."

Red Tail Farm proprietors Teresa Vanek '97 and Brent Welch '94 planted a trial plot of black currant bushes in 2005, largely because of the fruit's nutritional profile: it has vitamin C levels four times higher than an orange and potassium levels double those of a banana. While the Trumansburg couple sells gooseberry plants and fruit at the Ithaca Farmers' Market, they've been slow to offer the black currants for sale, mainly because of the challenges of picking the miniscule fruit. "It's ridiculously labor-intensive," says Welch, noting that more extensive plantings could justify a mechanical harvester. In the meantime they freeze the berries as time allows, and in the off-season craft homemade jams and jellies, which they started selling at the Farmers' Market this summer. "People love it," says Welch. "It's a precious commodity."