At seventy-six, professor emeritus T. Colin Campbell, PhD '62, continues his quest to publicize the benefits of a plant-based diet

At seventy-six, professor emeritus T. Colin Campbell, PhD '62, continues his quest to publicize the benefits of a plant-based diet 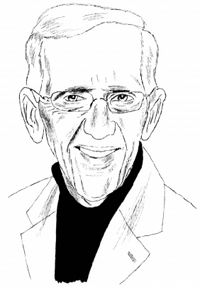 The irony has been pointed out more than once. T. Colin Campbell, PhD '62— who has spent decades studying the health dangers of animal-based diets— grew up on a dairy farm.

The Jacob Gould Schurman Professor Emeritus of Nutritional Biochemistry, Campbell is best known for the China-Oxford-Cornell Diet and Health Project, a two-decade-long study that New York Times health columnist Jane Brody '62 called the "Grand Prix of epidemiology." The first in his family to attend college, Campbell earned an undergrad degree from Penn State; at Cornell, he did his doctoral dissertation on more efficient ways to produce high-quality animal protein. But field work in the Philippines— originally focused on ensuring that children got as much animal protein as possible—took both his research and his life in an unexpected direction: he realized that the kids who ate the most animal protein were most likely to get liver cancer.

That discovery has spurred a career's worth of investigation into the perils of consuming animal products, and the attendant benefits of a whole-foods, plant-based diet. The work has not been without controversy—especially on a land-grant campus where dairy and livestock interests have a strong presence. In 2005, Campbell alleged interference from the dairy industry when his popular Vegetarian Nutrition course was pulled from the catalog, sparking a dispute with nutritional sciences administration that lasted several years; more than 1,000 students signed a petition to reinstate the course, and a version of it is now offered online.

Campbell's best-selling book, The China Study, was published in 2006. It was co-written with his son, Thomas Campbell II '99—a former actor whose work on the project inspired him to go to medical school.

Cornell Alumni Magazine: Your work first came to widespread attention through a 1990 cover story in the New York Times science section entitled "Huge Study of Diet Indicts Fat and Meat." Did the headline say it all?

T. Colin Campbell: At the time, it bothered me a bit, that it was sensationalizing. I wouldn't have gone quite that far—and I had to ask myself, am I really willing to say something like this? And the more I thought about it, the more I realized, yes I am. I guess I was a little skittish, because what I was saying was so controversial— especially challenging our reverence for animal protein.

CAM: From a scientific standpoint, why is animal protein more likely to cause cancer?

TCC: Plant proteins tend to be limiting in one of their amino acids, which makes them less efficient in promoting body growth rates. That was why they were always called "low quality." But in fact, they also hold back cancer growth. Animal proteins increase blood cholesterol levels, but plant proteins hold it back—so animal proteins promote heart disease and plant proteins don't. We're seeing the same thing with cancer.

CAM: Nowadays, most people see the connection between diet and conditions like diabetes and heart disease. Do you think they're open to your message about the relationship between food and cancer?

TCC: The public is confused about nutrition—for good reason, because if you've got different industries telling different stories, they're not going to tell you the truth, they're just going to tell you about their products. Nutrition is a powerful effector of cancer, but most people don't understand that; they think it's caused by chemicals in the environment. And though some chemicals can cause genetic damage to create an "infant" cancer cell, that's not the only event that determines development of the disease. This occurs by our use of inappropriate levels of nutrients, as foods, which act like fertilizer to grow these cells.

CAM: How did you come to do the China Study?

TCC: In 1980 and '81 we hosted the first senior scientist from China to visit the U.S.—he worked in my lab for eight months, and while he was here, we learned that his government had just released beautiful, color-coded maps of how much cancer existed in 2,500 counties all over the country. The differences between counties were substantial, so we went to China to do a big survey to find out why; we had access to rates of about a dozen cancers, and eventually to about three dozen other diseases as well. My Chinese colleagues went to 130 villages and collected blood, food, and urine samples and asked questions, and together we came out with this massive document. The body of data was absolutely huge.

CAM: What were the findings, in a nutshell?

TCC: In general, as we increase our animal-based food consumption, we get into trouble. It increases heart disease, cancer, and all kinds of other ailments and problems.

CAM: One of your most famous fans is former President Bill Clinton. How did he come to follow your dietary guidelines?

TCC: When his daughter Chelsea's wedding was coming up, she wanted him to lose some weight; also, he was about to get another stent and didn't want to. He ended up losing twenty-four pounds before the wedding, and I got a phone call from one of his close associates who told me, "He was there with your book, and he was telling everybody about it."

CAM: He took the book to the wedding?

TCC: That's what I was told—that he was raving about it at one of the dinners. And what he said later in an interview with Wolf Blitzer was absolutely spectacular, because it was very clear. He said, "I'm off all meat, all dairy. I eat a little fish, but I follow a plant-based diet."

' If we eat this way, the health effects are amazing. There's nothing in medicine that comes close to it.'

CAM: Why do you prefer the term "plant-based" to "vegetarian" or "vegan"?

TCC: Because I don't like the way "vegetarian" and "vegan" are interpreted. I didn't do this research to prove that vegetarianism or veganism are good ideas. I wanted the argument to rest on science, not ideology.

TCC: Ninety percent of vegetarians still consume dairy and eggs, so the nutritional composition of their diet is not that different; vegetarians have traded off meat for milk, more or less. Vegans don't eat any animal foods, so you'd think they've got it all together. But many of them do it for ideological reasons, and they don't know much more about the health aspects than anybody else. Their diets can be pretty high in processed foods, sugar, and fat.

CAM: So just being plant-based is not enough?

TCC: It's whole, plant-based foods— whole grains, the leaves and fruits and nuts and so forth. My interpretation of the evidence is not to use white flour or sugar products, not to add fat, and not to use fried foods. If we eat this way, the health effects are amazing. There's nothing in medicine that comes close to it.

CAM: But isn't it hard to make food as satisfying with those limitations?

TCC: In baked goods, my wife uses dried fruits like bananas or prunes to give it the consistency of fat. If a recipe calls for sugar, she cuts that back about two-thirds, sometimes to none—just uses fruit sources for sweetness. I don't think I'm rationalizing, but I really believe that food is more tasty to me than it's ever been. And part of that comes from the fact that we know that fat and salt have an addictive response that causes changes in brain chemistry and covers up the natural tastes that can be so appetizing.

CAM: Since you're enjoying good health at age seventy-six, do you see yourself as living proof of the benefits of plant-based eating?

TCC: Absolutely. There is heart disease in my family, and I've already lived, on average, ten years longer than my father and his father and brother. I still jog.

CAM: So do you want everyone to eat like you do?

TCC: This is not a diet, it's a lifestyle. I don't like to preach or proselytize. People have to make their own decisions. As I say in the book: you don't have to believe me—just try it.