In 2004, Tom Hostage '89, BS '90, wanted to create something special to mark the fiftieth wedding anniversary of his parents, Mike Hostage '54, MBA '55, and Dorothy Noll Hostage '54. He decided on a coffee-table book, a colorful and comprehensive account of the family tree, as well as the lives of Mike and Dot and the ten kids they raised. 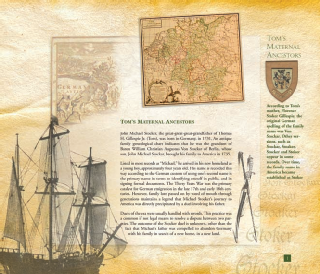 Hostage had the means: he's co-owner (with his brother, Tim Hostage '91, BS '93) of a commercial printing company in Framingham, Massachusetts, which offered access to a fully equipped production facility. The golden anniversary spurred him to thoroughly research his ancestry, interview dozens of family members and friends, and collect hundreds of photographs and documents. The end result was not only a professionally bound family history, but a business venture as well. "I saw how people reacted to the book," Hostage says, "and realized that I had found something I love to do and that other people might enjoy."

Hostage founded Bespoke History, a publishing company that he runs out of his home in Sturbridge, Massachusetts. (It takes its name from a British term meaning an item custom-made to a buyer's specifications, as in a "bespoke suit.") The company aims to preserve memories in the form of finely crafted books—professionally designed tomes that require, on average, about eighteen months to complete. As such, Hostage's clientele is decidedly upper income, folks who can shrug off the sluggish economy and pay anywhere from $30,000 to $100,000 to commission a family heirloom. Although Hostage can't name names, he says he's currently completing projects for the descendants of a legendary National Football League team owner, as well as for the former CEO of a major international firm.

One of Bespoke's first productions was A Place on the Hill, a 165-page, four-color book celebrating seventy-five years of the West Campus chapter of Sigma Phi for which Hostage interviewed more than seventy alumni, reaching back to Ralph Carpenter '31. The company's first multi-generational history commission came from Tom Gillespie '55, BA '56, a principal in a Connecticut-based investment management firm. "It's something that will be in my family for generations—and it's also digital, so he can update it any time we want," says Gillespie. "It's meaningful beyond my family, too. The book has been passed around in my church, my community, even my grandchild's school. It's an American story." 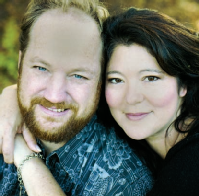 For years, Hostage did nearly all of the research and writing, though he recently recruited some Boston University grad students to assist him. His wife, Sherri Bredenberg-Hostage '89, BS '91, serves as Bespoke's photo editor, a job that can involve scanning hundreds or even thousands of images for each project. In one family's gothic mansion in the Boston area, the Hostages found a den filled with cabinets containing forty-five years of albums comprising more than 20,000 photos. After months of work, they condensed the collection into a seventeen-volume series —high-quality hardcovers with dust jackets bearing foil-stamped titles on the face and spine and eighty-pound coated-stock paper inside, averaging about 250 pages per book.

Bespoke's other products have included a memorial booklet honoring the life of Tom Gillespie's brother, the late Bob Gillespie '60, BA '61, and a 140-page history of the Steppingstone Foundation, a nonprofit that develops educational opportunities for inner-city schoolchildren. Although telling family tales remains Hostage's passion, he notes that with a handful of large companies inquiring recently, "I think corporate history is going to be a big part of our growth."

Of the ten kids in his family, says the former CALS communication major, "I'm the one who often sat around listening to the adults talk. I asked questions, and over time, I became a collector of the family's oral history." Essentially, that's what he does now, conducting dozens of personal interviews to complement the facts with colorful anecdotes and reminiscences. A member of the Association of Personal Historians, Hostage delves zealously into genealogy. In the process of reviewing historical records, he often uncovers ancestral gems and paints a family portrait against the backdrop of history. For instance, while researching the family of Peter Plamondon '54, an owner of the Roy Rogers restaurant chain, Hostage connected Plamondon's great-great-great-great-great-grandfather to a French army regiment that had been sent to Quebec. He also explored the story of Plamondon's great-uncle and great-aunt, who perished during the sinking of the Lusitania in 1915.

Another family from Pennsylvania asked Hostage to find a missing link in its ancestral history. Through grassroots genealogical research, he located a baptism registry; it eventually allowed him to identify the child's grandparents, who had emigrated from Ireland in 1731. "They'd been looking for that answer for 200 years," says Hostage, "and we found it in about three months."