As a Cornell junior, Ken Kunken '72 was paralyzed by a football injury and given little hope for a full life. Today, he's a Long Island D.A. with four academic degrees, a happy marriage—and three-year-old triplets. 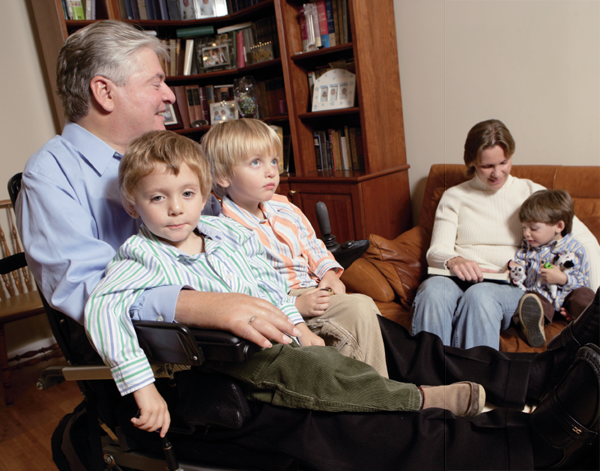 As a Cornell junior, Ken Kunken '72 was paralyzed by a football injury and given little hope for a full life. Today, he's a Long Island D.A. with four academic degrees, a happy marriage—and three-year-old triplets.

The Kunken boys have turned their living room into a combination obstacle course and trampoline. Having taken the cushions off the sectional sofa to form a padded square, the tow-headed triplets are running and hopping and somersaulting in a manic loop. A few months shy of three years old, the brothers are a force of nature as they race around the room—falling, laughing, and picking themselves up again. Their father looks on, wearing a smile so wide it borders on the comical. Ken Kunken '72 is sitting in a motorized wheelchair, almost completely paralyzed from the neck down for the past thirty-seven years, and he is deliriously happy. "They're not putting on a show for you," he tells a visitor to the family's spacious ranch house in Rockville Centre, Long Island. "I swear, they're like this every single night."

Even in an age when fertility clinics are commonplace, the arrival of Joey, Jimmy, and Timmy in January 2005 was enough of a medical marvel that it attracted a flurry of local news coverage; there's a framed Newsday cover story over the mantle in the Kunkens' den. "Paralyzed Man Fathers Three Sons," announced the local CBS affiliate, declaring that the triplets prove "that the impossible is achievable." Kunken was fifty-five when his Polish-born wife, Anna, gave birth by C-section. Although the boys spent several weeks in the neonatal ICU, they emerged with no lasting health problems. "When we were talking about getting married, Anna told me that she'd like to have my baby," Kunken says. "Not just a baby, but she wanted my baby. She wanted to see a little Kunken running around."

They went through three unsuccessful rounds of in vitro using electro-ejaculation before Kunken had surgery to retrieve sperm directly from his testicles. On the fourth try, at Weill Cornell Medical Center in Manhattan, doctors implanted three fertilized embryos in the hope that at least one would develop. They all survived, and the Kunkens were thrilled; both have close relationships with their siblings and were determined to have more than one child. The boys are fraternal rather than identical, and their distinct personalities have already begun to emerge. "They're very different, but they get along great," Kunken says. "Jimmy seems to be the most adventurous. He runs around and is ready to get into mischief, is always wrestling with his brothers and trying to push the limits. Timmy is the thinker—real bright and the more deliberative one who stops and observes everything. And Joey's the biggest guy. He's the one who just wants to have a good time."

When the triplets were born, the Kunkens still lived in the same two-bedroom condo he had occupied for two decades. When they bought the house in Rockville Centre, they did extensive renovations to widen doorways, build ramps, and create accessible bathrooms. The boys still share a bedroom, their three cribs lined up in a row and the closet filled with neatly arranged (and non-identical) outfits. When they were infants, Kunken would carry one in a BabyBjörn strapped to his chest or hold all three in his lap; they still love to sit there, but these days only two can fit. A nanny helps care for the boys, and the occasional visiting relative offers an extra pair of hands. "Ken doesn't look at any of this as stressful," says his older brother, Steve. "I think he is looking at every day as the greatest thing that's happened. It's like a new life for him, having them around."

Thirty-seven years ago, when Kunken was gravely injured during a 150-pound football (now called sprint football) game on the Hill, he scarcely would have dared to dream that it would turn out like this. Back then, the medical and social conventions of the day held out little hope: not only would he never recover, but he couldn't expect much of a future. A career as a district attorney and motivational speaker? A long shot. A successful marriage? Unlikely. And three biological children? Impossible. "When I was at the rehab center, I read a book that talked in great detail about spinal cord injuries," Kunken recalls. "It had a couple of pages on the movement you'd have depending on the level of your injury, where your sensation would be, how it affected your bodily functions. But they also had a page on careers. And the only career I remember them mentioning for someone who was hurt on my level was to sell magazine subscriptions over the telephone. And at that time, I couldn't even dial."

It was Halloween 1970 when Kunken, a 155-pound junior in his first game of the season—a sub, he had missed his first two chances to play due to a family funeral and the Jewish holiday of Yom Kippur—collided with the Columbia kick returner on the twenty-five-yard line. Longtime sprint football coach Terry Cullen, MBA '66 (then an assistant under his father, Bob), remembers the moment vividly. "The Columbia player got hit by somebody else and was airborne and came down on the back of Kenny's head," he says. "I knew what was wrong right away. I had just returned from Vietnam, so when he didn't have any feeling, I knew what it meant."

Kunken was taken by ambulance to Elmira, where the Cullens met his family in the hospital parking lot. Inside, Cullen says, the scene was worse than grim. "I remember walking in, and they had him tied up—I hate to say it—kind of like an animal. There were screws in the side of his head and they had him revolving around, trying to stretch the spinal column and maintain circulation. It was God-awful, just God-awful." Kunken had broken his neck between the fourth and fifth cervical vertebrae. He was a quadriplegic—unable even to shrug his shoulders, though he'd later regain enough control of his left hand to operate his wheelchair. Despite it all, Cullen says, "he was fantastically positive—more so than anything I could relate to." Steve Kunken, too, remembers his brother's attitude as strikingly optimistic, to the point where he was cheering up his visitors rather than vice versa. "People would go to see him to offer support, and their universal feeling was extreme nervousness. 'What do we say? What do we talk about?' And universally—it chokes me up a little bit—they would come out and say, 'I feel so much better.' "

Although Kunken put on a brave face for his friends and family, he admits that he wasn't always so upbeat. In his memoir, Still Me, the late Christopher Reeve '74 described his despair in the first days after his paralyzing injury; for Kunken, who has read the book and briefly met Reeve after his accident, the description of those awful moments rang true. "When I was first hurt, I definitely wanted to die," he says. "It was such a devastating injury, and I was in a lot of pain for quite a while. It just seemed totally hopeless." 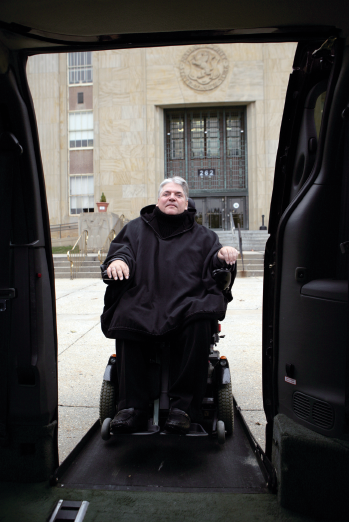 But after ten months at NYU's Rusk Institute of Rehabilitative Medicine—the same clinic where Reeve would undergo rehab decades later—Kunken returned to the Hill to complete his degree in industrial engineering. He lived in Sage Hall, and though he appreciated the University's willingness to convert a first-floor lounge into a dorm room for him, he still had to negotiate stairs to get in and out. At first, he says, his request for a ramp was refused. "They were very polite, but they told me they didn't want to do it because they'd have to remove two bushes, and they were concerned that some students might protest—this was during the days when there were a lot of protests. And one night, during my second semester back, we had a fire drill and everybody had to evacuate the building. The next day, an administrator asked how I managed. And I told him that I was able to get out by having my aide bounce me in my wheelchair down the steps, but I felt bad because I slowed down the other students."

The Americans with Disabilities Act was two decades off. Although Kunken eventually got a ramp outside Sage, there were no accessible dining halls, so he ate most of his meals in his room. He relied on passing students to help carry him in his wheelchair so he could get to class. (He distinctly remembers that Bailey Hall, where he took psychology from Prof. Jim Maas, had sixteen steps.) And then there was Cornell's inescapable geography—the steep slopes, far-flung buildings, and snowy winters. It was, he says, "probably one of the least wheelchair-friendly places I could have gone." But he stayed active with his fraternity, Sigma Nu, and remained close with his teammates. "Everyone was really helpful and I tried to participate as much as I could," he says. "I attended all the football and hockey games and tried to go to fraternity parties. But Cornell was very difficult to get around."

Unable to write, he handed out carbon paper to classmates and asked them to share their notes; he dictated his papers or typed them with a pencil attached to a splint using his left hand, twelve words a minute on a good day. Kunken got his engineering degree in 1973 and stayed on the Hill for a master's in counseling before earning another master's in psychology from Columbia. Then, he says, "I looked for a job for a year. I sent out over 200 résumés, and nobody would hire me." He eventually became a vocational rehabilitation counselor, at an annual salary of $10,000; at the time, he was paying his personal care attendant more than $15,000. After two years he opted for law school, graduating from Hofstra in 1982. His brother, a defense attorney, recommended that he go into tax law, because he was good at math and could work entirely from behind a desk. "He rejected that pretty much out of hand and said he wanted to be in the courtroom doing trial work," Steve Kunken says. "I thought that was nuts. That's what I was doing, and it's very physical." An internship with the Nassau County District Attorney's office led to a career as a prosecutor in which he tried sixty-five felony cases and presented more than 250 cases to the grand jury. He's now a deputy bureau chief, supervising two dozen assistant D.A.s. "He's very skilled in a courtroom," says colleague Dan Looney. "And in his current role as a supervisor, I couldn't think of a better role model for young D.A.s. He teaches them the importance of being compassionate toward victims and the responsibility of always being prepared."

Kunken met Anna in 1999, when she became one of his weekend aides; they got engaged two years later. With a master's in business that she earned in Poland, she had come to the U.S. to study English and graphic design. "After about five minutes, I forgot about the wheelchair," she says. "The thing I noticed was his blue eyes, and most important, his great voice." Lately, the couple has been working to launch Kunken's career as a motivational speaker; he gives talks in which he shares his personal history and offers advice on overcoming obstacles. "Even if people say that something's not possible, he just flies right through it," Anna says. "People say, 'You cannot manage, you cannot do this or that.' And Ken says, 'Let's just do it. We'll worry about it later.' "

Thanks to John Marcham '50, former editor of the Cornell Alumni News, for the phone call that initiated this story.