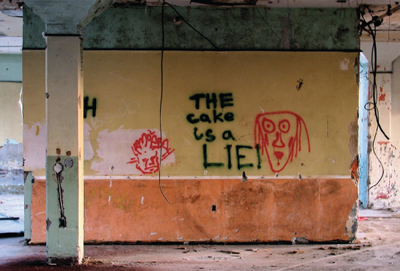 The Ithaca Gun factory—located on Gun Hill, just below campus—produced one of the world's most celebrated firearms (aptly named Deerslayer) as well as precision parts for the Sten gun, the precursor to the Uzi. Military and riot police worldwide were on familiar terms with Ithaca guns; the CIA, FBI, and ATF were regular visitors to Gun Hill.

Among its employees were teams of artisans who engraved elaborate images on the guns' decorative metal plating and craftsmen who fashioned the walnut stocks and handgrips favored by hunters, soldiers, and collectors. These designers and engineers poured their working lives into the creation of shotguns, side arms, and semi-automatics.

Following its closure in 1986, the plant became something else entirely: a moldering dope den, crash pad, and spook house. While the ground was contaminated with lead from decades of making and testing firearms, the walls inside and out became a canvas for the expressions of the drug-addled, as well as for capable street artists—a collective that called itself the Vandal Squad—whose surreal stencil works held their own against any urban graffiti. 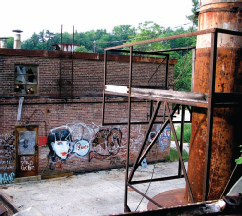 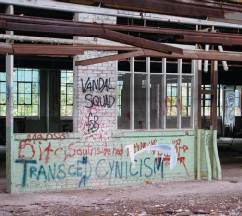 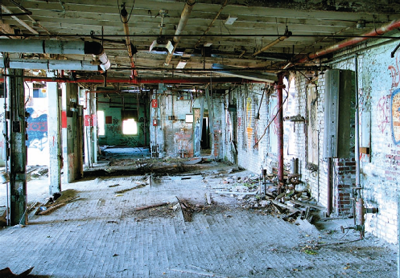 Largely hidden from the public, their artistry was fascinating as much for its subject matter as for its ironic origin. The word "fate" appeared as a motif throughout the grungy complex; Edgar Allan Poe's glowering mug was rendered here and there. The insignias of several Cornell frats suggest the facility also served as a site for hazing rituals. The three crosses of Calvary were well represented—a complex joke when you think about "Gun Hill." Obama got a plug, and there was poem, in French and reeking of Rabelais, that asked the reader to imagine himself as a fish exploring "satin waterfalls."

Once upon a time, Ithaca Gun was a set piece of Americana, central to the lives of generations of workers and their families. Abandoned, "The Gun" became a post-postmodern teenage wasteland, the antithesis of industry and manufacture, a toxic site and museum of the absurd. By the time you read this, all of it will have been demolished to make way for upscale condos.