Bodybuilder Jean Gutierrez '04 has six-pack abs, a teeny bikini, and a PhD

Bodybuilder Jean Gutierrez '04 has six-pack abs, a teeny bikini, and a PhD

It's all about looking good, looking fit—and looking like you're smiling effortlessly as you tense every muscle in your body. Such is the mission of figure competitor Jean Jitomir Gutierrez '04. Tanned and oiled, coiffed and bejeweled, she stands onstage in high heels and a barely-there bikini, flexing and posing before a panel of judges.

An assistant visiting professor in the exercise science department at George Washington University in Washington, D.C., Gutierrez describes figure competition as a combination of the athletic and the aesthetic. "It has elements of bodybuilding," she says, "and elements of a beauty contest." In other words, although you must be lean and sufficiently (but not overly) muscular, you are also judged on everything from your hair to your stage presence.

Most figure competitions consist of several rounds. In the first, competitors walk onstage in one-piece swimsuits and do quarter turns to show off their painstakingly sculpted physiques. In the second, they do the same in bikinis. Then the top scorers are asked to return. Before an audience that can range from a few hundred in a regional event to a few thousand at the national level, they're compared side-by-side to others in their height class (at five-two, Gutierrez is in Class B). The winners of each class are then judged against each other. 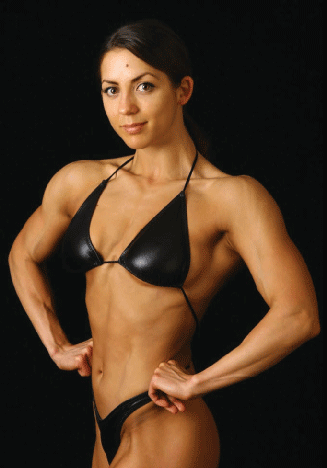 Over the years, Gutierrez's academic responsibilities have meant that she competes only sporadically. She has a master's degree in nutrition from SUNY Buffalo and a PhD in exercise, nutrition, and preventive health from Baylor University. But when she does compete, she tends to do well. She won regional National Physique Committee events in 2006 and 2007 and finished fourth in her class at the national-level Arnold Amateur figure competition in 2008. The prize money is nil (she is an amateur, after all), but Gutierrez contends her real reward is the trite-but-true notion that she feels good about looking good—not an insignificant accomplishment for someone who long saw herself as "the girl getting pelted by speeding dodge balls in gym class."

Gutierrez, who turns twenty-eight in February, grew up on a farm in Upstate New York; while she describes her chores as "early weight-training," she was hardly in shape. As a teen, she was unable to do a single pull-up or run a mile. When she babysat, she could barely keep up with the toddlers. In her first year on the Hill, Gutierrez doubled the infamous "freshman fifteen," gaining some thirty pounds while her GPA plummeted. She was so depressed that she had a hard time getting out of bed. But over the summer, she vowed to make a change. A friend dragged her to the gym every day, and Gutierrez was inspired by the personal transformation of someone she knew well, a woman who had earned her law degree at Cornell only months before Gutierrez enrolled in the Ag college—her mother.

Susan BetzJitomir '97, JD '00, grew up in poverty on Long Island and dropped out of high school at sixteen when she became pregnant with Jean's older sister. Later, she left her second husband when Jean was eleven, temporarily staying with her daughters in a domestic violence shelter before moving into subsidized housing. But she eventually earned her GED, spent two years at Corning Community College, and enrolled at Cornell. She is now a founding partner of a small law firm in Bath, New York. "Seeing how she worked hard to make good choices and get us out of the situation we were in, how she empowered herself to get a better life, that made it seem accessible to me," says Gutierrez, who switched to the College of Human Ecology and a nutritional science major. She started working at a fitness center on campus, bought Arnold Schwarzenegger's Encyclopedia of Modern Bodybuilding, and designed her own training program, gravitating to free weights while most of her female peers opted for cardio machines. 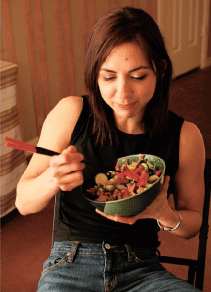 Then, as a senior, Gutierrez happened upon a poster advertising a bench press competition. "I'd never seen a woman in the gym lifting more than I did, so I decided to do it," she says. Pound for pound, she was the top female lifter, and she continued to perform well after graduation. In 2005, she entered a regional bodybuilding contest—and won. But it soon became clear to her—due in part to not-so-subtle hints from judges—that she would have to use performance enhancers to succeed at the highest levels. So she turned to figure competition, opting for discipline over drugs.

Gutierrez works out fifteen to twenty hours a week and starts each morning with a 600-calorie breakfast, having another half-dozen small meals as the day goes on. She teaches three courses at GW, where her research interests include pediatric obesity and type 2 diabetes. She has also served as a private nutrition coach, a corporate wellness lecturer, and a blogger whose columns have ranged from "Decoding Artificial Sweeteners" to "A Guide to Great Glutes."

According to the American College of Sports Medicine, a woman in her twenties who can bench press her own weight is in the ninety-ninth percentile of upper body strength. Gutierrez's weight fluctuates between 110 and 130 pounds, depending on whether she's dieting for a competition. In October, she bench pressed 165, nearly good enough for a national record. As a fitness and nutrition expert, she says that while her lifestyle is a bit extreme, the lessons are universal. "It's not appropriate for most people," says Gutierrez, who can now do thirty pull-ups in a row and run a 6:30 mile, "but parts of it can be useful to people who have heart disease or diabetes, or are just trying to lose weight and be healthier."