For the past couple of years, Sarah Davidson has been leading a double life. By day, she was a doctoral candidate helping to coordinate global efforts to combat stem rust, the fungal scourge of cereal crops. But on nights and weekends she'd hit the rink—and whomever was in her way—skating for the SufferJets, Ithaca's flat-track roller derby team.

Now in their second season, the all-female SufferJets are part of a neo-feminist revival of a sport that once rivaled professional wrestling for its pseudo-violent entertainment value. Today's players have transformed roller derby into a campy, post-modern pastime for soccer moms, geeks, and amateur athletes. In keeping with the satirical culture of the resurgent sport, the twenty-plus Ithaca team members go by aliases like Bella DaRink and Cruisin' B. Anthony; their uniforms are a cross between car-hop waitress and streetwalker. Accoutrements include full protective gear—helmets plus knee and elbow pads—and old-fashioned, four-wheeled roller skates 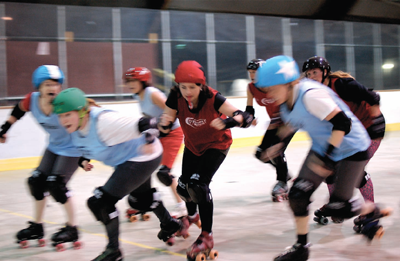 Several founding members of the SufferJets are Cornell students or staff who had no prior experience with the sport, considering it a fun route to fitness and friendly competition. Not that the University affiliation has helped them secure Lynah Rink as a practice site; risk management tends to err on the conservative side, and roller derby is a contact sport. For now, home is the Cass Park rink by Cayuga Lake; the team competes there in late spring and summer, when the ice is off the oval. In the winter, they practice in the recreation center of the West Danby Baptist Church—which makes for lots of "holy roller" quips. "We're a pretty good mix of working folks, moms, and a few students," says Davidson, a.k.a. Sarabellum, who finished her PhD in May. "We might be a little brainier than some other teams, but that's the Cornell influence."

Roller derby squads have five players, and bouts usually consist of three twenty-minute periods. Four blockers work to prevent the other team's jammer (the point scorer, who wears a starred helmet) from lapping them; points are scored each time a jammer passes an opponent. Bouts can get rough, but fair play is observed according to rules established by the Women's Flat Track Derby Association, a national governing body. The SufferJets play eight to ten matches (plus some scrimmages) each season, going on the road to challenge the likes of the Syracuse Psycho Dolls and the Hellions of Troy.

The SufferJets take pride in their grassroots evolution: the team is skater-owned and operated. They make their own uniforms ("We're looking to recruit a seamstress," says Davidson), handle their own promo, and enlist support from local businesses. They hold derby nights at local bars to raise funds and host a Valentine's bash and a June Derby-Taunt Ball. Ten percent of their ticket sales—which have been brisk, with many 2008 bouts sold out—go to to local nonprofits, and men are welcome to serve in supporting roles. Biology lecturer Mark Sarvary, PhD '06 (a.k.a. Tiny Bubbles), is a coach; Davidson's thesis advisor, plant biology professor Bob Turgeon (a.k.a. Harry Slaughter), occasionally mans the penalty box. "It's a great sport, full of energy and drama," Turgeon says, "and it can turn on a dime." 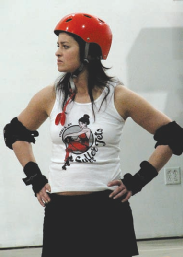 The team practices about twice a week throughout the year. One frigid February night, the women scrum at the West Danby center on a cold concrete floor under dim, diffuse lighting. Despite the chill, the SufferJets sport skimpy gear: shorts or mini-skirts, short-sleeved shirts or tank tops, and vampy fishnet leggings. There's an element of exhibitionism in the costuming, though any cat-fight posturing is purely fun and games. One practice routine involves a player passing low under a rope, rising from a crouch and giving her "opponent" on the other side a good nudge. "You get knocked on your ass and it's fun," says Lab of Ornithology staffer Kitty Gifford, a.k.a. Chairman Meow. "It's a hard-hitting form of sisterhood." Gifford ought to know: she broke an ankle last season.

Jezra Spisak '01, a.k.a. Belle on Wheels, says the sport is a great way to vent "suppressed aggression that women don't often get to unleash." Spisak, a Cornell lab technician, was recruited by Davidson and Gifford after they saw her skating inside the Biotechnology Building. Sarah Alexander, a.k.a. Snarl Marx, saw an ad for the SufferJets on Craigslist. Alexander, a grad student in development sociology, had never roller skated before, though she played soccer and lacrosse at Wells. "Joining the SufferJets gave me a chance to strike a balance between the serious life of grad school and the fun but rigorous athleticism of roller derby," she says. "I went to one practice and I was hooked."