In the woods of Cornell Heights, an exquisite corpse

In the woods of Cornell Heights, an exquisite corpse

Just off Ridgewood Road, in the heart of Fraternity Row, lies a relic of faded glory. Nestled in a glen bordered by Highland Road, the wooded two-and-a-half-acre parcel conceals the surprisingly well-preserved remains of a vintage kidney-shaped swimming pool, measuring roughly forty feet by twenty-five; if you squint, you can imagine Clara Bow or Mary Pickford sunning themselves on chaises longues. Nearby is a ramshackle but still elegant slate cabin, complete with stone fireplace. It once served as a pool house, but now it looks like a setting for The Blair Witch Project. 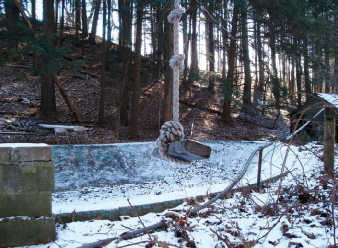 The land was part of an estate belonging to Frank L. Morse, founder of the Morse Chain Company. The manor house, a Tudor-style creation designed by Chicago architect Walter Burley Griffin (a former assistant to Frank Lloyd Wright), overlooks the abandoned pool from atop the ridge. Nicknamed Greentrees, it was built in 1913 and sold following Morse's death in 1935; it has since been home to several fraternities, currently Pi Kappa Phi. "Soon after the house was completed, it was used as a setting for a locally produced silent film, The Ruby Kiss of Death," notes a pamphlet on Cornell Heights architecture compiled by the local historical society. "It was depicted as a den of thieves."

The parcel containing the pool and cabin was sold in 1996 to the Travis family, prominent Ithaca developers and landlords. Last fall, after the assessment more than doubled to $125,000, they put it on the market at an asking price of $299,000. Frost Travis, MPS '00, president of Ithaca Rentals and Renovations, says the land was bought with an eye toward rental apartments, but nowadays he envisions several single-family houses. "If you looked at Google Maps, I suspect you wouldn't find many parcels of this size within two blocks of campus that are available for building," says Travis. "We haven't had a flood of interest, but we're patient. We don't need to sell it, but if the right buyer comes along we're ready."

Although the pool has been unused for decades, someone has clearly been enjoying the land; there are empty bottles strewn about and the cabin's fireplace bears the remains of burned boxes from twelve-packs of beer. There's a bare-bones rope swing that looks fairly new—but how did someone lash it fifty feet in the air with no obvious way to climb up? The fact that the pool is relatively free of debris—along with the presence of a plywood ramp and folding chairs set up for poolside viewing— makes one suspect that skateboarders have discovered its concrete pleasures; Pi Kappa Phi president Ivi Demi '12 points the finger at local high schoolers.

Then there's a large sign declaring "Open Doors, Open Hearts, and Open Minds" over a faded crest. Now toppled from its base, it looks to date from long before the University adopted the phrase—a variation on the credo of the United Methodist Church—as its diversity slogan a decade ago. Where did it come from? Travis offers a possible clue. "I know anecdotally that my great-uncle went to some kind of day-care program there and swam in the pool," he says. Could it have been a program run by a local church?

And as though the spot weren't spooky enough, ninety-three-year-old Everett Morse offers fodder for a ghost story. Morse, whose grandfather was Frank Morse's brother, remembers the house in its glory days, but says he never visited the pool. "A fellow was drowned in that pool," he recalls. "I think it was a child, but not a relative. And they never used the pool after that."