"I can't give as much to Cornell as Cornell has given to me."

That seemed to be the theme of the night at the Statler Hotel in October, as eight alumni were presented with the Frank H. T. Rhodes Exemplary Alumni Service Award. The University's highest honor for service by alumni, the award recognizes those who have demonstrated extraordinary commitment through long-term volunteer efforts. The awards are presented by the Cornell Alumni Association.

Two couples were among those honored. Barton Mills '64, who received the award along with wife Nancy Dunhoff Mills '64, recalled that his grandfather was a professor of civil engineering and his father was an alumnus, so coming to Cornell was destiny. Joe Henninger '56, MBA '58, who accepted the award with wife Suzanne DeRosay Henninger '57, said the best moment he's ever had as a volunteer was receiving a thank-you letter from a student he had met with who had received financial aid.

Steve Laden '57, an active volunteer in the Philadelphia area, also was a recipient; sadly, Steve passed away a few weeks prior to the ceremony. In accepting the honor, Steve's wife, Lee, thanked Cornell for "sending this beautiful Steuben crystal award to Steve so that he could see it in his hospice room."

Jack Krieger '49 recalled coming home from World War II and finding out that his father had applied to Cornell for him, because someone his dad respected had gone there. Harold Tanner '52, a former chair of the Board of Trustees, spoke about how he first got involved as a volunteer and about "giving back to an institution from which we have received so much." 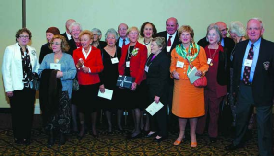 For Elizabeth Schlamm Eddy '42, the most senior of the recipients, being in the Statler for the ceremony was especially ironic, since it's the site of her freshman dorm—she lived in a cottage by Sage Hall, the women's residence at the time. She also remembered being on campus on December 7, 1941. An active volunteer since graduation, she ended her speech with her love of giving back to her alma mater. "For sixty-nine years—thanks a lot, Cornell." 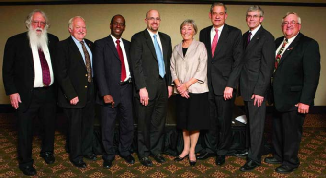 After nearly forty years of teaching communication in the College of Agriculture and Life Sciences, semi-retired professor Brian Earle '67, MPS '71, received an Outstanding Faculty Award from the college and its alumni association at a gala event in the Statler Ballroom in November. "This award is humbling and meaningful to me in many ways," Earle said. "It was twenty years ago that our family gathered here in support of my father, Wendell Earle, PhD '50, when he received the Outstanding Alumni Award. This recognition is an affirmation of my career."

Earle has been a popular teacher since joining the department in the Seventies. Thousands of students took his Business and Professional Presentation course, and his Communication Fellows class took seniors to New York City to study innovative corporate cultures and meet with communication industry leaders. Beyond his work on the faculty, Earle has been a popular adviser, guiding many students into careers in business and communications. Earle also served CALS and Cornell in the development of the American Indian Program, the North Campus Community, and the Carol Tatkon Center. He served as co-chair of the CALS Centennial Planning Committee from 2002 to 2005. His unique and entertaining "Dining Etiquette" presentation has become legendary at many Upstate New York colleges. "Cornell has been a great home for my extended family and me," Earle said. "Teaching and advising for nearly forty years has been a constant reward." 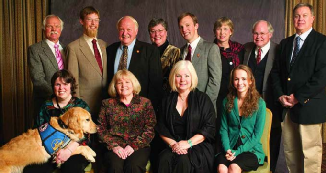 Earle is the only faculty member to receive all four of CALS's top teaching and advising honors: the Louis and Edith Edgerton Career Teaching Award (2004), the Kendall S. Carpenter Memorial Advising Prize (2003), Professor of Merit (1998), and the Donald C. Burgett Distinguished Advisor Award (1997). In 1991 he received the SUNY Chancellor's Award for Distinguished Teaching. Three Merrill Scholars have selected him as their most influential teacher. Upon his retirement in 2008, the Daily Sun published a front-page article about his career, and the Department of Communication renamed its student activities fund the Brian O. Earle/Kenneth J. Bissett Student Fund, also named in honor of communication student Kenneth Bissett '89, who died aboard Pan Am Flight 103.

The three-day gathering at the Marriott Wardman Park Hotel will feature can't-miss sessions that cover a broad range of topics, as well as presentations by Provost Kent Fuchs and Vice President of Student and Academic Services Susan Murphy '73, PhD '94.

Registration information is available online at alumni.cornell.edu; hotel reservations can be made by calling the Marriott at (800) 228-9290.

For years, Bob Quencer '59, MS '63, has noted that there are many Cornellians at the University of Miami/Jackson Memorial Hospital, both on staff and in the medical school. So he sent out an e-mail proposing a get-together, and the response was overwhelming. Now, a new tradition has been born.

Each year, on the third Thursday in October, thousands of alumni from around the world gather for International Spirit of Zinck's Night, a tradition honoring the now-departed Ithaca bar. On October 14, a few days prior to the actual celebration, twenty Cornell alumni affiliated with the hospital gathered for a special Zinck's celebration at a local restaurant.

As with all Cornell gatherings, there was a range of ages and experiences; stories were told and connections reestablished in an atmosphere resembling the old Zinck's. The most impressive moments came when each alumnus shared a Cornell memory, showing how things change—or don't—over the years. Stories included students streaking across campus, the adventure of camping out for hockey tickets, and key moments with faculty. There was even an impromptu rendition of "Don't Send My Boy to Harvard."

At the conclusion of the event, a unanimous vote was taken to continue the tradition next year. And in the true spirit of Cornell and the evening, the group agreed to work toward establishing a scholarship for a student from the Miami area.

For Marathoners, Friendly Faces in the Home Stretch

On November 1, more than a hundred alumni participated in the ING New York City Marathon. While Cornellians are known to be in shape—thanks to Libe Slope— most of them didn't actually run the race; they manned the twenty-fifth mile water stop. 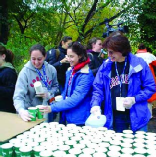 The event was organized by Julia Levy '05 and Joanna Lieberman '07, who reached out to fellow alumni through NYC Cornellians (the new association for alumni in New York City's five boroughs) as well as to students at Weill Cornell Medical College, and attended several meetings to learn their duties as "mile captains." While they expected a handful of volunteers, they were overwhelmed by the response of more than 130, many of whom showed up with friends and family. "It was incredibly inspiring for us to be able to offer alumni and families this opportunity to be at the center of the action," says Lieberman. "We hope it's a Cornell stop for years to come." (Next year, you may see Lieberman on the other side of the marathon, as she is training to run the race. For now, Levy says she plans to stick to handing out water.) 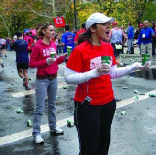 Volunteers arrived at dawn to help set up—unloading equipment, mixing Gatorade, and stacking cups of water in preparation for the more than 40,000 runners who were expected to pass by. But their duties were more than just distributing refreshments. With just over a mile to go before the end of the race, they yelled encouragement to runners to keep going. "It kept my energy level up knowing that Cornellians would be at the twenty-fifth mile water station to support us," says Betty Eng '92, who ran the marathon. "Spotting those red Cornell sweatshirts in a sea of volunteers was an amazing feeling. I made a beeline for the water and up went the enthusiastic cheers from alumni who recognized me. It carried me as I headed out of the park with 1.2 miles left to get to the finish line. That feeling of support was incredible."