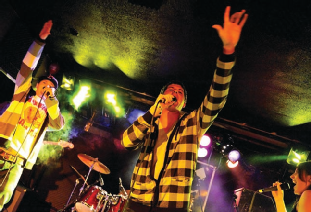 It’s Homecoming weekend, and a crowd of former and current students has trekked downtown to a club on Cayuga Inlet where a band called Pants Velour is performing its catchy brand of hip-hop. Their time is up, but just before they’re hustled offstage they insist on playing one more song. “We’ve got to do this one,” says front-man Josh Raff ’07, as the band launches into “Da Alma Mada,” their hip-hop take on a classic.

It’s Cornell, y’all
Do you get it?
Cornell dog, and don’t forget it
That old track was hot
But this track is hotter
This here’s the new Cornell
Alma Mada

Formed in 2006, Pants Velour includes five members of the Class of 2007: emcee Raff, vocalist Nellie Thompson, guitarist Sam Coe, drummer Rajiv Ravishankar, and “hype man” Eli Northrup (whose job includes pumping up the crowd). After graduation, the members went their separate ways before reuniting in New York City in fall 2008. They’ve since played more than a dozen shows in Manhattan as well as gigs in Philadelphia and Washington, D.C. “We’ve started to build momentum when our Cornell friends and fans tell their friends,” Raff says. “We’re going for the snowball effect.”

The band is working on a demo CD of original songs, such as “You Won’t” (“a loud shout-out against naysayers who tell you that you can’t do something,” says Raff), “Day in the Life” (“a party song about going out on the town”), and “Mama Says” (“about all the things your mom tells you to do when you’re growing up, but you inevitably disobey her”). Music is still a part-time venture for Pants Velour: Raff gives tennis lessons, Northrup and Coe are in law school, Thompson (who now lives in D.C.) is studying for the LSAT, and Ravishankar works for IBM. “We didn’t take ourselves seriously at Cornell,” Raff says of the band. “We still don’t take ourselves too seriously, but it’s definitely got a more legit vibe about it now.”