Snake attacks, boating accidents, lightning strikes. Those misfortunes, and a host of others, befell the students and faculty visiting the Adirondacks for the Medical college’s wilderness medicine course last fall. 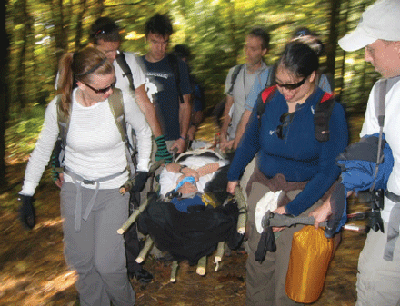 Give Todd Miner a length of rope and some sturdy branches, and he can contrive a stretcher capable of carrying an injured hiker out of the wilderness. In fact, he doesn't even need the rope; in a pinch, he can make the stretcher using zipped-up jackets, with the branches fed through the sleeves. Or he can just use some canvas straps, woven into a sling that helps one person carry another, piggyback style.

On a brilliantly sunny day in mid-October, the director of Cornell Outdoor Education (COE) offers those lessons, and a host of others, to a dozen future doctors. The students—from Weill Cornell Medical College and other schools around the country—have trooped to the Adirondacks for an elective in wilderness and environmental medicine. They've spent the previous three weeks in New York City—working in the emergency department at NewYork-Presbyterian Hospital/Weill Cornell Medical Center, attending lectures, taking field trips to the Bronx Zoo and New York Botanical Garden. Now, at a picturesque summer camp on the shore of Lake Champlain, the students are getting hands-on lessons in back-country medicine, survival skills, and more.

But as Miner winds up his stretcher-making workshop and the students relax on the grassy shore, they hear shouts from the nearby woods. Tim Greene, a fourth-year student at Mount Sinai School of Medicine, comes running out, cradling his hand and looking stricken. His hiking companion, med student Kelly Grabbe, has been bitten in the lower back by a snake. He'd tried to capture it—and had been bitten himself.

The questions come fast and furious. "What did the snake look like?" "Did you get a look at its head?" "Can we find it?"

A brief search reveals that the serpent—suspected to be an Eastern diamondback rattler—is long gone. Justin Pitman, a fourth-year student from UVM, inspects Greene's wound. "I'm fine," Greene tells him. "My hand just hurts like hell."

As Weill Cornell emergency medicine professors Jay Lemery and Flavio Gaudio '89 look on, Pitman directs his fellow students in examining Grabbe, a fourth-year at the University of North Texas. She's nauseated and cold, with a tingling sensation in her feet. They pull a mattress pad from a backpack and lay her on top of it, covering her in fleece jackets to stop her shivering.

Pitman turns to the rest of the team. "We'll clean the wound a little bit," he says. "But we have to get these guys out of here—that's the main thing."

They try to call for help, but there's no cell phone reception. By now, Grabbe is vomiting and unable to walk, so the students fashion a stretcher according to Miner's instructions. They lift her onto it and begin the arduous task of carrying her out of the woods and up a hill, with four people holding each side of the litter. "All suspected poisonous snakebite cases need to be evacuated," Gaudio observes. "There's no definitive field treatment for this."

But when they near the top of the hill, Gaudio directs the students to put down the stretcher. Grabbe rises and dons her hiking boots; the stretcher is disassembled. The snake attack was just an exercise—though everyone involved had tried to make it seem as real as possible, using makeup to depict the victims' wounds and throwing themselves completely into their roles.