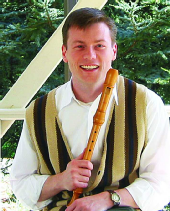 For Glen Shannon, the phrase "recorder music" does not conjure images of third graders clumsily tooting "Hot Cross Buns"; instead he thinks of Baroque fugues played by forty-piece orchestras. And he doesn't just think about such arrangements—he creates them. By day, Shannon works full-time at San Francisco graphic design firm TransPacific Digital. But by night, he composes multi-part preludes and fugues that are played by recorder ensembles and orchestras all over the world.

Shannon first encountered the recorder in third grade. "In school, the recorder was a musical aptitude test," Shannon recalls. "If you could do that then you'd graduate to a 'real' instrument." He was promoted to clarinet, and in eighth grade began composing for clarinet ensembles. But even after playing a "real" instrument, including three years in the Big Red Band, he preferred the recorder. And when he won a recorder composition competition in 1995 he felt he had enough street cred in the recorder world to start his own brand, Glen Shannon Music.

While the recorder was extremely popular during the Renaissance, it is underappreciated today, says Shannon. "The recorder is an easy instrument to learn—that's why they introduce it to children early on," he says. "People think of it as a toy, because hearing it played well isn't common." There are about a dozen sizes of recorder, and Shannon writes music for all of them. His contrapuntal, bass-heavy style is influenced by Baroque composers like Bach and Vivaldi. But the most important aspect of his music, Shannon says, is that those playing it have a good time. "When I was playing the bass clarinet in band I was always playing those long tones, and I didn't have a very interesting part," he remembers. "So I decided that the music I write is going to be fun for everybody." 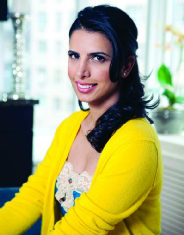 Divya Gugnani has three passions in life—food, media, and business—and with the help of a few cooking classes and an MBA from Harvard, she has made a career combining all three. In 2008 she started her own culinary media brand, Behind the Burner, and two years later launched Send the Trend, an online store for trendy and inexpensive fashion accessories. She has also written a book, Sexy Women Eat: Secrets to Eating What You Want and Still Looking Fabulous, and has been featured on numerous TV programs, as well as an American Express commercial.

The idea for Behind the Burner came after several years of working in investment banking and venture capital. The Human Ecology grad began appearing as a guest on MSNBC's "Your Business," and the media exposure opened her eyes to the possibility of combining her interests in the form of a website, behindtheburner. com, where visitors could share restaurant-grade tips from professional chefs.

In addition to the site, Gugnani hosts a short-form TV cooking show, also called "Behind the Burner," where she shares tips, tricks, and techniques for food, wine, mixology, and nutrition on location at bars and restaurants. The show is syndicated to more than 20 million households on such channels as NBC New York Nonstop. "People are not dining out as much," says Gugnani. "Instead they want to bring that restaurant-quality meal and experience home, and are dabbling more in cooking. With cooking shows, magazines, blogs, websites, and cookbooks, people are starting to take control of their culinary experience."