Women giving birth in the U.S. rarely labor alone. Those in Africa and elsewhere in the developing world frequently do, often for days on end. For such women, dying in childbirth might well be the second-worst outcome; obstetric fistula, largely eliminated from the U.S. a century ago, might be the worst.

In regions where limited infrastructure and poverty curtail access to medical care, labor can last five or six days, with the delicate tissues of the mother's bladder and rectum crushed between the baby's skull and her own pubic bones. Usually, the baby dies; so do the woman's oxygen-deprived tissues. The result is an obstetric fistula, which causes extreme urinary and fecal incontinence—making women pariahs in their own communities, where they endure a lifetime of shame amid whispers of infidelity, curses, and disease. "The fistulas that occur in underdeveloped countries are a result of the fact that many girls marry young and have been malnourished, so they're of smaller stature," says Ithaca-based gynecologist Catherine Husa '73, who has traveled to Burundi and Sri Lanka to treat the condition and provide other surgical care. "Yet even if the babies are malnourished, they have a fairly good-sized head, which gets trapped high up in the pelvis." 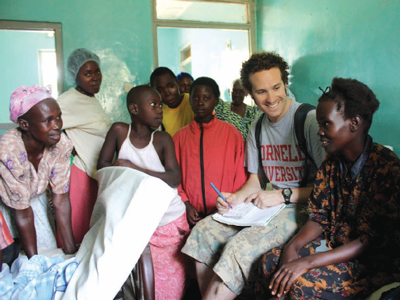 In March 2008, former telecom executive Seth Cochran '00, MEng '01, launched Operation OF, a nonprofit dedicated to preventing obstetric fistula and offering treatment and help with post-surgical social reintegration for women rejected by their families and communities. Both a self-described feminist and a "man's man," the former varsity football player and Zeta Psi fraternity brother is the first to admit that he doesn't exactly fit the stereotype of a health crusader for African women. Even so, he says, "I'm totally adjusted to the vernacular of reproductive health. Words like 'vagina' don't even make me bat an eye." Introduced to the issue by a friend, Cochran knew immediately that his work could make a profound difference. "I was mostly moved by the opportunity," says the thirty-year-old, who draws heavily on his background in financial engineering and organizational strategy to facilitate training for local surgeons, optimize the services of existing health-care organizations, and promote microlending to help women recovering from corrective surgery support themselves.

Over the past year and a half, Cochran has learned to honor the wisdom and insights of the people he meets, from fellow social entrepreneurs to local surgeons, health-care workers, and the people he aims to help. Near the end of his last trip to Africa, he says, he met a woman whose story reinforced the nonprofit's emphasis on economic empowerment. Married young and abused by her husband and mother-in-law until protracted labor killed her baby and caused a fistula, Martha had always been financially dependent on someone else—her father, her husband, his family. Cochran witnessed the forty-five-minute surgery that repaired her body. "It dawned on me that if we just sent her back to her village, the same thing could happen again," he says. "She had bad experiences, but she was in pretty good shape. And we couldn't just send her back without any support."

That spurred Cochran to seek out organizations with which Operation OF could partner to provide training and microcredit for women to launch their own businesses. Some sew baby clothes purchased by hospitals as an incentive to encourage childbirth in facilities with trained staff. Others grow mushrooms or make crafts. "My idea of empowerment is not 'I'll come to Africa and show you how to do it,' he says. "I want to find solid people and support them by challenging them and helping to clear obstacles." This summer, Cochran traveled throughout Kenya, Rwanda, the Democratic Republic of Congo, and Uganda— meeting with health-care providers, aid workers, and women with fistulas.

While surgery can't always restore full function, Husa says, it can mean the difference "between a faucet on full and a faucet dripping." That, along with measures like washable pads, can vastly improve a woman's quality of life. "It's not clear how many fistulas there are in the world," says Husa, noting that official estimates range from a half-million to two million. "That's probably a gross underestimation. Most women are so ashamed that they're not going to say, 'I have an obstetric fistula.' Finding the true number is impossible."