Professor Shawkat Toorawa, alias Dr. T, paces like an expectant dad in front of a huge, unearthly blue screen in the Tatkon Center's lecture hall. He checks his watch. Checks the wall clock. Silence. More pacing. Stragglers shuffle in, shedding backpacks. There is a cellophane crackle as someone reaches for a shortbread biscuit. Toorawa sips tea from a paper cup, double-checks the time: 5 p.m. Spot on. 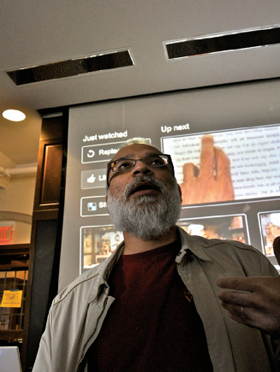 "For the next thirty minutes we're going to learn a little bit about Stephen Biko, a legendary but less-well-known South African anti-apartheid activist and hero, Margaret Atwood, a Canadian author who writes very, very good books—her novels are not short but you ought to read at least one or two of them; I suggest starting with The Handmaid's Tale, which was made into a film not well worth watching, but the soundtrack by the Eurhythmics wasn't bad—and lastly…" He pauses for dramatic effect. "Romulans! Enemies of the good guys, the Federation. From Romulans you will learn what constitutes villainy and treachery, and from the Federation, the stuff of heroism."

Barely two minutes have passed; the class has grown to about thirty students of various majors and grade levels. The screen fills with an image of rocker Peter Gabriel, live in concert, introducing his 1986 hit song, "Biko." "Have any of you heard of Peter Gabriel?" Toorawa asks. A smattering of hands go up. "How about Stephen Biko?" Fewer hands.

All right, then. Travelers, your ship is about to set sail.

Welcome to the "Dr. T Project: A Cornell Hitchhiker's Guide to Culture"— weekly drop-in sessions where, at warp speed, Toorawa lectures on three topics he thinks students ought to know about, but probably don't. His presentations are nonlinear, and the items may or may not be themed. It's a twenty-first-century twist on an ancient tradition: a master offering his students pearls of wisdom from unexpected sources.

Since launching the sessions in September, Toorawa has covered music by pop icon Lady Gaga and Spanish classical guitarist Narciso Yepes, and films by Japanese master Akira Kurosawa and Hollywood auteur Tim Burton. He's discussed the architecture of Frank Lloyd Wright and the portraiture of Velázquez, traced the French roots of Frank Sinatra's "My Way," and pondered the meaning of words like sinan—Arabic for spearhead, but also the name of an Ottoman architect whose most famous work is the Suleiman Mosque in Istanbul. "This is not a prescriptive exercise," says Toorawa, a professor of Near Eastern studies. "There is no pressure. It's a chance to introduce students to cultural items that are not something they necessarily need to know, but rather something they might want to seek out."

The chance to garner knowledge for its own sake plus the lure of free PG Tips tea and Walkers Shortbread seems to be a winning formula. It works for Cornell economics major Aleksey Boytsov '12, who has attended every Tuesday session. "I like to collect random bits of erudite cultural knowledge—and I love tea," he says, tilting his cup. "Each time, I learn something from Dr. Toorawa that I would not have known otherwise."

Toorawa is short, bespectacled, and bearded. He thrums with energy that fuels a stream of silvery chatter flavored with a London accent. Students find his method and his fiery manner engaging. "I went to his program as part of freshman orientation," says Amy Kasman '14. "It was so different from everything else that I kept coming back. It's a great way to learn about things that aren't on my radar."

Dr. T navigates from high-brow to low-brow culture without hitting turbulence. To explain Biko's role as a martyr whose death at the hands of prison guards in 1977 spurred the anti-apartheid movement, Toorawa employs not only the Gabriel song but YouTube clips from the movie Cry Freedom and quotes from a well-thumbed Dictionary of Global Culture. As he tools along, he shares his excitement at learning something new. "Did you know Biko popularized the phrase 'Black is beautiful'?" he asks. "I didn't."

The Hitchhiker's Guide has been a hit since its origins as part of the 2010 new student orientation program, says Carol Grumbach '78, JD '87, director of the Tatkon Center. The center itself, located next to Balch Hall, is billed as "an intellectual, cultural drop-in center" for all first-year students. "I look forward to his weekly talks," she says. "I've learned a lot."

This reporter wracks his brain. Mating dance of a flightless bird from New Zealand?

"I didn't know either," she says with a wry smile. "Look it up." (A later consultation with Professor Wikipedia reveals it to mean "the quality of being self-sufficient.")

Dr. T. navigates from high-brow to low-brow culture without hitting turbulence.In an outcome-driven world, Dr. T's sessions are an oasis in a desert of grinding in-depth study, and since student turnout has been solid—especially considering the hour—the course will continue into spring semester. Toorawa has also invited some guest speakers, including philosophy professor Scott MacDonald '78, PhD '86, who presented three things that he loves: the Miles Davis recording Kind of Blue, a poem by Gerard Manley Hopkins, and two Jackson Pollock paintings.

Back to the action: With less than ten minutes left, Toorawa is on a roll. Having dispatched Biko and Atwood, he hands around a manual on how to identify various Romulan warships. "Always know your enemy," he says and discusses the importance of identifying bad guys, learning their tactics, and—with help from YouTube and Captain Picard of the star-ship Enterprise—facing them down.

In a climactic showdown with the Romulans, led by Commander Tomalak, the Enterprise is surrounded. Tomalak demands surrender. The intrepid Picard counters that he's willing to die if the cause is "just and honorable"—and he'll take Tomalak along with him.

"The good guys win," notes Toorawa, a diehard Trekkie. "They have to. It's a franchise, and they were contracted to return for the following week's show."

Toorawa has his own show to come back to the following Tuesday. And not even Dr. T knows exactly what it will be.