Carolyn Goodman '36 was a Rebel with a Cause 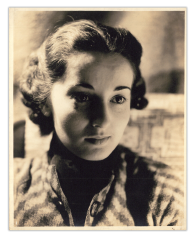 a FEW YEARS AGO, CAROLYN Drucker Goodman '36 told me about a scene she had just witnessed from the porch of her rented home in the Hamptons. "A family of swans glided by, floating into view in a space between the thickets of grass," she recalled. "There were two adults and three young ones, all in a line. These little swans were probably a month old and ready to swim."

The metaphor–three youngsters, soon to veer off in different directions– was obvious. Carolyn, who passed away in August at the age of ninety-one, had watched her three sons embark on divergent destinies. Jonathan, the eldest, grew up to be a talented musician and Hassidic Jew living in Israel. David, the youngest, is a successful businessman in New Jersey, developing alternative-energy plants. And then there's Andrew, the middle child, who went to Mississippi and never came back. His fate would shape Carolyn's life.

In June 1964, as part of the Mississippi Summer Project–an effort to flood the state with northern college students to launch a massive voter-registration drive–twenty-year-old Andy volunteered to go to Neshoba County, a region notoriously unwelcome to "outside agitators." On his second day he went missing, along with colleagues Mickey Schwerner '61 and James Chaney. While the fate of the trio remained unknown, Carolyn became a symbol of desperate hope and anguish during a seminal moment of the civil rights movement. But forty-four days later, the young men's bodies were found buried in an earthen dam. They had been abducted and shot by the Ku Klux Klan.

This was neither the first nor the last of Carolyn's personal tragedies. Her older brother had succumbed to septicemia at age seven; her younger brother dropped out of high school and left the family. Her father committed suicide two weeks before her wedding. A stroke took her husband, Bobby Goodman '35, BCE '39, a civil engineer with a poet's heart, at age fifty-four. Her second husband, Joseph Eisner, died in 1992. Although she admitted to being greatly affected by the loss of so many of the men in her life, Carolyn Goodman was no victim. She was headstrong, resolute, unyielding in her point of view. She didn't just survive; she thrived. In fact, as I came to know her while working on her memoirs, I saw that her life epitomized that of the progressive twentieth-century activist.

At Cornell during the Depression, Carolyn helped organize local farmers' cooperatives. After graduation, during the Spanish Civil War, she supported the Joint Anti-Fascist Refugee Committee. During the McCarthy witch hunt of the Forties and Fifties, the Goodmans' sprawling Manhattan apartment became a haven for their persecuted left-wing friends–artists and intellectuals like Zero Mostel and Alger Hiss. In the late 1960s, having earned a master's in clinical psychology from City University and a doctorate in education from Columbia, she developed a program for emotionally disturbed mothers of young children in the Bronx. Even well into her eighties, Carolyn remained a rebel with a cause. Through the Andrew Goodman Foundation, she produced "Hidden Heroes," a documentary celebrating youth activism. And in 1999, Carolyn was gently carted off to jail, arrested while protesting the death of Amadou Diallo, the Guinean immigrant shot and killed by the NYPD.

Twice, Carolyn found her way to Mississippi. The first time was twenty-five years after Andy's death, when she organized a Freedom Caravan that rolled from Neshoba County to New York City. Carolyn claimed no interest in confronting the known perpetrators of her son's murder, who were still living free in the area. "I want to find the people who want to fight (intolerance)," she said, "not the people who are perpetuating it." But two years ago, Carolyn returned to testify at the trial of former Klan leader Edgar Ray Killen, who was found guilty of manslaughter exactly forty-one years after he orchestrated the murders.

Despite her son's fate, Carolyn Goodman maintained to the end that she had no choice but to allow him to go south. She knew that, had the civil rights battle peaked a generation earlier, she might have gone, too. "Bobby and I realized there was no way in the world we could say no to Andy," she once said. "Our lives, our values, would have had a hollow ring."