Fade in on a hospital room. Two men are confined to their beds. One has bandages over his eyes; the other peers out a window. "So what's he doing now?" asks the blind man.

"She doesn't want flowers! She wants a ring!" says the blind man, as though they have been following the lovers' adventures for some time. After the two men share a laugh, he adds, "Hey, you know, if it wasn't for you telling me what's going on in that park, I don't know what I'd do. . . You made me realize that there's plenty to enjoy without having to see it. Thanks."

Time passes, and the park stories continue—a marriage proposal, a happy ending— until the man near the window is wheeled out for surgery. Later, the blind man discovers that his friend didn't survive. Shaken, he asks the nurse for a favor: "Would you take a look down at that park and tell me what you see?"

She opens the blinds and we see . . . nothing. "Mr. Johnson," she tells him, "there's nothing outside this window but a brick wall."

Four minutes and fifteen seconds. That's how long it took to tell The Hospital Window, a tale of compassion and camaraderie, friendship and fortitude. Such is the mission of SpiritClips.com, a subscription-based online community created by Hollywood producer Rob Fried '81 and offering members a selection of short films that are long on inspiration. 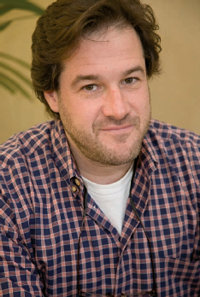 One might say that the big idea started with a little guy—five-foot-seven Daniel "Rudy" Ruettiger, the scrappy walk-on to the University of Notre Dame football team whose dream-come-true tale was immortalized on the silver screen. Of all the films that Fried has developed during more than a quarter-century as a studio executive and producer—a list that ranges from Hoosiers to Man of the Year to Collateral—he believes Rudy best reflects his sensibilities. Roger Ebert called the movie "a small but powerful illustration of the human spirit"—but Fried thought it could have been even smaller. "I always believed that it could have succeeded as a five-minute film. Just set it up and show the final play of the game," says Fried, who won an Academy Award for his short film Session Man in 1992. "I thought I could make a number of these Rudy-type movies in short film format. And now that broadband is widespread, I could deliver them via the Internet and communicate these messages en masse."

Launched in 2007 and staffed by a dozen filmmakers in Los Angeles, Spirit-Clips has produced nearly sixty short films, all overseen by Fried as director or co-director and writer of the final draft. They come in a variety of styles—live-action, animated, mini-documentaries, anywhere from ninety seconds to five minutes long—but each is designed to lift the spirit. In Sally (starring Fried's wife of seventeen years, actress Nancy Travis), an overworked and underappreciated waitress receives a life-affirming tip from the most unlikely of customers. The Price of Miracles is an animated short about a little girl trying to save her ill brother. The Fork, which nearly snagged a live-action short film Oscar nomination last year (it was one of ten finalists for five slots), depicts a Holocaust survivor offering a memento to her soon-to-be-wed granddaughter.

Fried conceived SpiritClips as an alternative to user-generated video sites. Unlike YouTube, for instance, the content is guaranteed to be of professional quality. But he also considers it an antidote to Hollywood, where the pursuit of riches often trumps artistry and social responsibility. "I believe that if your goal is to make money, find a business that makes money," says Fried, who also owns a billboard company in China and has started several digital media firms. "If your goal is to make films—as an art form, as a form of expression—make them worthy of your name." So Fried aims to do just that. As the ultimate creative voice, he avoids the too-many-chefs pitfall of many Hollywood projects, in which the film-maker's original vision falls prey to studio realities. Thus the films represent his sensibilities—moral standards that he hopes to convey to his two children.

Fried has been approached about creating television shows and feature films under the SpiritClips rubric—which he envisions as not just a platform, but also a brand conveying certain values and quality, in the vein of Disney or Hallmark. As such, the films are meant to be shared. For $35.99 per year, premium members can watch the shorts and send them (as personalized "FilmCards") to an unlimited number of family and friends. Some companies have distributed the films as well. NASA has purchased more than a dozen SpiritClips shorts, including a film about JFK's challenge to reach the moon; both Aetna and AAA sent an animated short called The Little Frog—described on the website as a two-and-a-half minute tale about two frogs who "fall into a deep, dark pit and surprise everyone"— to hundreds of employees.

Community is central to the Spirit-Clips mission. Members can create their own profiles, comment on the films, and interact with fellow viewers as well as each film's cast and crew. The website also invites people to submit their own inspirational stories. Out of a few thousand submissions, nearly a dozen have been turned into SpiritClips shorts, earning their originators a "story submitted by" credit. "I believe that there is a future for professionally produced content, where the creators—the writers and film-makers—develop a direct relationship with the fans of their work," says Fried, an ILR grad who earned an MBA from Columbia.

It is that connection that drives Fried, who believes that because the relationship between a film and its audience can be profound, the filmmaker has a duty to make each movie meaningful. "That doesn't mean it shouldn't be entertaining, but to ignore the fact that it impacts people's view of the world is irresponsible," he says. "It does. It absolutely does."