It’s not often that a college course changes your life. But that’s exactly what happened to Hotelie John Zimmer ’06 when he took a “green” city planning class as an elective in the College of Architecture, Art, and Planning his senior year. Zimmer recalls a spirited lecture on the evolution of U.S. transportation, which explained how the country transitioned from canals to railroads to highways. “I started thinking, OK, if those are the first three slides in the presentation, what would be the fourth slide ten years from now?” he says. 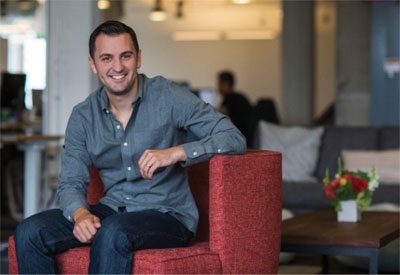 Co-founder John Zimmer ’06, who touts the company as a way of reducing the nation’s dependence on car ownership Photo provided

Fast forward nearly a decade, and Zimmer has tried to answer that question with Lyft, the app-driven ride-hailing service he co-founded in 2012. Now in sixty-five U.S. cities, the San Francisco-based company facilitates more than 2 million rides every month. Lyft operates much like its well-known competitor Uber, with passengers requesting a ride with a simple tap on a smartphone, and in major cities like New York the two companies charge roughly the same rates. But while other ride-booking firms offer an experience akin to a traditional taxi or chauffeur service, Lyft aims for a warmer, fuzzier vibe. In fact, when the service first began, drivers strapped giant, furry pink mustaches to their car hoods to make themselves stand out. “It was all about having fun with it and getting people to smile,” Zimmer explains. (Earlier this year, the company swapped that look for a smaller, fluorescent “glowstache” that attaches to the dashboard.)

In keeping with that friendlier attitude, passengers are also encouraged to greet drivers with a fist-bump and sit in the front seat. An optional feature lets people include personal information in their user profiles, including hometowns and favorite music. All this is aimed at sparking conversations and connection. “Lyft is more like your friend with a car,” Zimmer says, “versus everyone’s private driver.” He points out that Lyft also has a different mission from its rivals: to reduce the nation’s dependence on personal car ownership, which in turn will lessen traffic congestion and air pollution. “We’re not trying to just get you a ride on the weekends, or when you want to be able to have a drink,” he says. “We want you to use it for your everyday commute.”

The overall approach seems to be good for business: Lyft reported five-fold growth in ridership and revenue for 2014. The company is currently valued at about $2.5 billion, a figure enhanced by several fundraising rounds this year, including a reported $100 million from billionaire Carl Icahn. Yet Lyft has hit a few bumps along the road. It has battled regulators in some key markets, including New York City. Lyft still trails its main adversary in name recognition — chart-topping rapper Wiz Khalifa titled one of his recent songs “Uber Driver” — and size. Uber, which is worth about $40 billion, serves 300 cities across six continents.

Like Uber, Lyft has endured occasional claims of driver misconduct, ranging from harassment to assault (though sites that track such things, like the taxi-industry-sponsored whosdrivingyou.org, have tallied many more incidents involving Uber than Lyft). To improve safety, Lyft created a screening process that includes criminal background checks, vehicle inspections, and a “zero-tolerance” drug and alcohol policy, which Zimmer points out is stricter than some cities’ taxi requirements. “There are many cases where a taxi driver can have a DUI on their record and drive,” he says. “We made sure that wasn’t allowed on our platform.”

At times, the turf war between the two rivals has gotten nasty. In 2013, Zimmer and Uber CEO Travis Kalanick exchanged a flurry of testy tweets that ended with Kalanick hash-tagging Lyft as “#clone.” Uber has run aggressive “Shave the ‘Stache” ad campaigns in an attempt to recruit Lyft’s drivers — and according to news reports, some Uber drivers allegedly tried to sabotage Lyft last year by ordering and canceling rides. Zimmer gently sidestepped the issue in a May interview with CAM, a phone conversation during which he never once mentioned Uber by name. Asked to describe the rivalry, he says, “The best thing for us as a company is to focus on our vision, our values, and our mission.”

To that end, Lyft recently introduced Lyft Line, a ride-sharing network that lets users save as much as 60 percent on fares by traveling with other passengers. It has become so popular in San Francisco that half of all Lyft rides in the city are through the network. The feature goes back to the company’s roots: after meeting through a mutual friend on Facebook, Zimmer and his co-founder (a former public transit system director with a business degree from the University of California, Santa Barbara) launched an online carpooling service called Zimride in 2007. Zimride was active mostly on college campuses, including at Cornell, where Zimmer would sometimes promote it wearing a frog suit. Back then, the Greenwich, Connecticut, native was also working as an analyst at Lehman Brothers, but he quit to pursue Zimride full-time — just three months before the financial services firm went bankrupt.

The partners eventually sold Zimride to car rental giant Enterprise, opting to focus exclusively on Lyft, which they had created as a spinoff company offering rides without the carpooling angle. And while the startup has caught on quickly, plenty of challenges remain. In June, Lyft agreed to pay New York State $300,000 to settle a lawsuit over claims that it had violated insurance and licensing regulations when it launched in Buffalo and Rochester without obtaining the necessary approvals. The company had previously worked out an agreement to offer service in New York City as long as drivers were licensed by the Taxi and Limousine Commission, but it’s still fighting to resume operations elsewhere in the state. If approval eventually goes through, Zimmer — whose mother and sister live in Ithaca — says he can count on at least one loyal employee. As he notes with a laugh: “My mom really wants to be a Lyft driver one day.”