In a sprawling, three-story warehouse in Ithaca's Southside neighborhood, hundreds of salvaged windows and doors and dozens of clawfoot tubs, kitchen sinks, and lighting fixtures await new homes. A quartet of conjoined theatre seats upholstered in royal-blue velvet rests near a Forties-era Magic Chef oven. Closer to the entrance, boxes of ornate hinges and doorknobs fill the shelves beneath a rustic sign suspended from the ceiling declaring, "Turn old into gold."

That maxim has served as a guiding principle for Historic Ithaca, a nonprofit landmarks preservation concern whose retail operation, Significant Elements, was founded in 1991 in a nineteenth-century tobacco barn. The store clears $8,000 to $10,000 in receipts each month; on a good day, between fifty and eighty customers pass through its doors. Clad in sweaters, caps, and boots to ward off the winter chill, Historic Ithaca executive director Alphonse Pieper, MA '97, and preservation services coordinator Kristen Olson, MA '09, survey their inventory. "These are the things that excite us," says Pieper, pointing out the meticulous dovetail joinery of a cherry-stained stair railing from the early 1800s. "Our mission is to support the preservation and restoration of older houses. We're not a garage sale or a thrift store— we're a business."

Ithacans have long appreciated that old chestnut about one man's trash being another's treasure. While Craigslist and Free-cycle facilitate online swaps and there's a brisk local business in curbside redistribution of housewares and couches, Significant Elements plies both sides of the trade: accepting donations and providing salvaging services, then making the goods available for historic restorations, for low-cost renovations, and as fodder for artistic endeavors. "Salvage has been happening a long time," says Pieper, who heads the city's landmarks preservation commission and traces the movement as far back as the Revolutionary War and pioneer attitudes about frugality. "It's in our nation's culture." 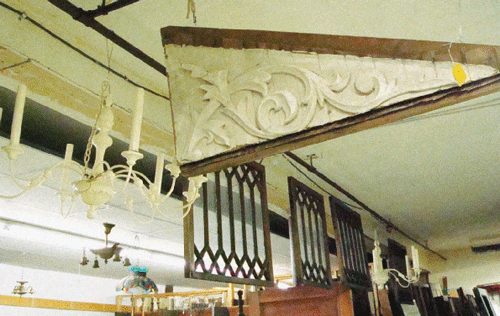 Such efforts got a boost this winter with the launch of Finger Lakes ReUse, a nonprofit committed to reducing waste and training workers in deconstruction, appliance and furniture repair, and retail. Inventory in its 7,000-square-foot store in a strip mall north of campus mimics that of Significant Elements, but with a twist: the emphasis is on diverting waste from landfills, not on preserving history. Modeled on similar operations in Burlington, Vermont, and Ann Arbor, Michigan, Finger Lakes ReUse fills a critical local need, says Barbara Pressman Eckstrom '79, MS '84, head of Tompkins County Solid Waste and a member of the ReUse board. "There was an incredible amount of good material being thrown away," she says. "It wasn't necessary for it to go to the landfill." The new enterprise dovetails with the waste reduction goals established in 1995 by the county, which partnered with Cornell Cooperative Extension to partially fund the operation. "We've reduced the amount of garbage being landfilled by over half already," says Eckstrom, crediting mandatory recycling and myriad waste-reduction education programs. "With the ReUse center and food composting, our goal is a 75 percent reduction by 2015."

This spring, Finger Lakes ReUse will launch a local deconstruction operation, training a team to salvage everything from the roof to the foundation of buildings in Tompkins County that would otherwise meet their end through the bulldozer or wrecking ball. Nationwide, building demolitions account for 65 million tons of waste annually; renovations generate another 60 million. The Environmental Protection Agency estimates that residential demolition—of some 250,000 houses nationwide—sends nearly 1.2 billion board feet of reusable lumber to the landfill every year.

In April, Finger Lakes ReUse ran a pilot deconstruction, dismantling a Forties-era cottage on the Ithaca College campus that yielded 500 square feet of oak flooring, structural lumber, and numerous windows. In 2006 and 2007, founding executive director Diane Cohen headed up the salvage of components from the renovation of Cornell's Riley-Robb Hall as well as from the Class of '18 and '26 University Halls, demolished for the West Campus Residential Initiative. "We were trying to divert as much from the waste stream as we could," says Cornell's director of construction management, David Newman, who serves on the board of Finger Lakes ReUse. "There was a lot of material that had value, but no place to store it and a limited market to get the materials claimed in a timely way."

With the University's commitment to climate neutrality, diverting waste through strategic purchasing, recycling, and reuse will be top priorities, says director of facilities Phil Cox. Already, the University has supplied cabinetry, carpeting, lighting, and furniture to the reuse facility. "Now we have a terrific opportunity to partner with our own community," he says, noting that the founding of Finger Lakes ReUse spares the University from creating a duplicate enterprise. "We have to figure out how the campus can exploit the potential of this facility to put surplus material back into use. We have high hopes that this will help us lower the amount of solid waste going off campus."