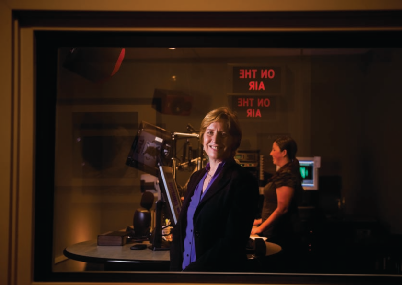 VS: I grew up in Larchmont, New York. I had the most ordinary suburban upbringing, which I've pretty much replicated, even though when I was in high school—being the rebellious teenager— I would say, "This God-forsaken, soulless suburb! With God as my witness, I will never end up in a place like this!" And now I live in Bethesda, which is completely identical, and I'm so happy. So much for teenagers.

VS: I majored in Russian and Soviet studies. I was also into taking English classes, and all my friends were artsy-fartsy. We walked around barefoot on the Arts Quad and wore long skirts and Indian schmatas from the House of Shalimar. I wish I didn't cut the classes that I did, but it's part of the college experience.

CAM: Were you involved in journalism on campus? The Daily Sun or WVBR?

VS: No. I had absolutely no idea of what I wanted to do with my life. I just followed my interests. I had exposure to so many things: art, literature, languages. It was an extraordinary time, and I'm glad I didn't focus on career preparation. Maybe that's an irresponsible thing to say in this economy—but, boy, you never get that again.

CAM: What did you do after graduation?

VS: I graduated early and spent what would have been the spring semester of senior year in Moscow studying for my master's degree from Middlebury. Then I worked as a tour guide going back and forth to the Soviet Union, which was the best post-college job you could imagine. I had a blast. I'd leave with a group from Kennedy Airport and stay with them for two weeks, come home for one day, do my laundry, and leave again. When I find time, I'm going to write an article—if not a book—about how everything I learned about management and leadership, I learned as a tour guide at twenty-two.

CAM: So how did being a tour guide lead to a career in media?

VS: After four years there was pressure from my parents: "Are you going to live out of a suitcase for the rest of your life? How are you going to meet your husband?" So I looked around for other opportunities. I had given Russian lessons to a couple of PR executives from Turner Broadcasting, and they were looking for a production assistant—that was the title, but it was just a flunky job. The cool thing was that because I could speak Russian and I knew the Soviet Union, I got to travel with some of the top executives, be with them to translate for their meetings, make their restaurant reservations, fetch their coffee. So I got to learn about media as a complete peon, sitting at the feet of the highest executives.

CAM: Given your long tenure in the media, has anything about this job surprised you?

VS: I guess I underestimated the power that NPR has over the audience. I feel like a rock star sometimes. People who appreciate the New York Times will go, "Oh, you work for the Times, that's such an important institution." But at NPR, they're like, "Oh my God, this is part of my life, this is part of who I am— I'm an NPR listener." It's this heartfelt, visceral response. It makes me feel like, wow, we have a big responsibility.

CAM: What are you consuming in the mass media these days?

VS: Despite the fact that I work at a news organization, I'm not a high-brow media consumer—it's not like I'm always sitting around reading the Economist. I love movies, I love television, I read. And eating is a big part of my life. I love ethnic food, Middle Eastern, Greek.

CAM: If there were an NPR program called "The Vivian Schiller Show," what would it be like?