As GM pins its hopes on the Chevy Volt, Nancy Laubenthal '85, MS '87, is in charge of building its key component

As GM pins its hopes on the Chevy Volt, Nancy Laubenthal '85, MS '87, is in charge of building its key component

In August 2009, Nancy Laubenthal '85, MS '87, found herself in a vacant warehouse full of possibilities. As the newly named manager of the Brownstown Battery Assembly Plant just south of Detroit, she watched as a General Motors PR team unveiled what just might be an automotive revolution.

This place, the assembled media were told, is where GM will become the first major automaker to manufacture an advanced lithium-ion battery pack in the United States. The battery would be the heart of a new concept car known as the Chevrolet Volt, representing a milestone for GM—and perhaps a jolt of energy for the American auto industry. But as Laubenthal now admits, at the time the goal seemed awfully ambitious. "It was totally empty here," she recalls, standing in the center of a now fully functional, 160,000-square-foot plant. "And I wondered if people were going to believe us." 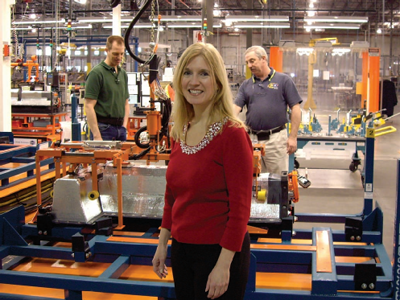 Available in late fall with a sticker price of $41,000 (before a federal tax credit), the Volt is designed to be what GM has dubbed "an electric vehicle with extended range capability." It can be driven up to forty miles on electricity, requiring no gasoline and producing no emissions. Once the battery is depleted, a flex-fuel engine-generator (the company doesn't call it an "engine") takes over, extending the total range to about 300 miles. GM has invested some $700 million in eight Michigan facilities for Volt-related production, including $43 million in the Brownstown plant. "It's probably the most exciting project to be working on in the company," says Laubenthal. And she's the type who welcomes a challenge: she has climbed a glacier and gone tandem paragliding in the French Alps, and plans to ascend Mount Kilimanjaro.

At the Brownstown plant, one of her first tasks was to assemble a work force, identifying people who could run a lean operation—meaning that many are experts in their area but also able to wear different hats. This initial group was followed by another hiring wave, for a workforce that now totals thirty and will eventually reach 100. "We had to create a lot of the training, because we haven't built batteries before," Laubenthal says. "We can't go to another plant and get that exposure."

Her second major challenge: overseeing installation of new machinery to fill that once-empty warehouse. The battery—T-shaped, about five feet long, weighing close to 400 pounds—is produced in three primary assembly areas. First, the more than 200 cells that will make up the battery's three linked modules are assembled in an entirely automated process. Next, the mechanics and electronics of each module are completed, also primarily an automated process. Last, the modules are assembled into the T-shape, a labor-intensive procedure given the need to verify that all connections are functioning properly.

These forays into uncharted territory regarding manpower and machinery were made even more challenging by an aggressive timetable. In January, the first battery was produced. From there, the plant ramped up through a series of "block builds," as more batteries were assembled for testing purposes. Then they were put through their paces to gauge durability and performance under extremes of heat, cold, and usage. Testers also scrutinized the interface between the battery and the vehicle itself. Full production is scheduled to begin in late 2010—barely fourteen months after Laubenthal stood inside the nearly empty plant and worried about meeting expectations. "It is going just as I envisioned," she says. "But I also know that the closer you get to actually launching, the more focus and adrenaline it will take."

An Ohio native who grew up about forty-five miles south of the Brownstown plant, Laubenthal has spent her entire career at GM. After earning a bachelor's in chemical engineering, she participated in a Cornell program that combined an advanced degree with real-world experience, spending half her time on the Hill pursuing a master's in chemical engineering funded by GM and the remainder as a salaried employee.

Although mechanical and electrical engineers are more common in the auto industry, Laubenthal's background was well-suited to her first position in GM's paint and polymers department, as the company was changing from solvent-based paint technology to a more eco-friendly waterborne application (the subject of Laubenthal's master's thesis). She spent her first decade at GM in an engineering role, examining potential improvements in materials, processes, and equipment and then implementing changes at manufacturing sites. In her second decade, she has gained executive experience in manufacturing at various Michigan facilities, overseeing the start-up of a new paint shop in Lansing and managing general assembly in Flint; she also ran the General Motors Europe Paint & Polymers Center in Germany. Laubenthal, who earned an MBA from the University of Michigan, also did a stint as chief of staff of GM's manufacturing and labor relations team.

The breadth of her GM education coalesced in May 2009 when she was offered the Brownstown job. "In the beginning, my focus was on advanced technology, and I found it very interesting—the learning, the chance to see an industry change," says Laubenthal. "But there's part of me that likes the manufacturing side. I like to see the product come out the door, to be on the floor solving problems and working with people. So this is the best of all worlds."