How will Cornell weather the current economic storm—and what will the University look like decades from now? Those questions and more face President David Skorton and Provost Kent Fuchs as they lead a broad effort to assess the institution’s strengths and weaknesses, balancing academic ideals with harsh realities. In a conversation with Fuchs, CAM offers an update on the strategic planning process, and how you can contribute to the discussion about Cornell’s future.

As 'Reimagining Cornell' moves forward, Provost Kent Fuchs explains what's been done so far—and where we go from here 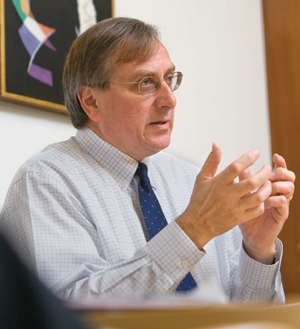 In June, President David Skorton announced a strategic planning process called "Reimagining Cornell" that has the ambitious goal of eliminating a projected budget deficit of $215 million while enhancing the University's excellence. He named Provost Kent Fuchs to lead the process. In early December, I sat down with the provost to get his thoughts on the work that's been done and what lies ahead.

Cornell Alumni Magazine: You are now in the middle of the planning process. When did this begin?

Kent Fuchs: We were actually involved in planning before the economic downturn. The administration drafted a strategic plan that was released almost two years ago and posted on the president's website (www.cornell.edu/president/strategic-plan.cfm ). It was a good document, but the trustees and the president decided, more than a year ago, that they wanted a plan with more specific goals and benchmarks for the future of the institution. So there was a commitment to do that—to take that existing plan, make it more concrete, and begin execution.

Then, last year, we recognized that the economy was not good and was getting worse, and we knew we would have to adjust our expenditures. As we looked at the projections, we realized that the effect was going to be on the order of 10 percent of our budget—$215 million that we would need to take out of our expenditures. We knew that we needed to fix the budget, but at the same time we had aspirational goals. So we asked, is there some way to do both at the same time?

CAM: How did you start?

KF: On the expenditure side, we started by doing the simplest thing, which was reducing everybody's budget. We asked, how much can we take out and how can we do it in a way that won't damage any unit? We decided on 5 percent, and that, coupled with a reduction in payout from the endowment, saved $80 million. So we have another $135 million to go. We are now working with external consultants to implement another $90 million in savings from administrative operations. Across the University, we're involved in a process, coupled with planning for the long term, of asking, can we reduce expenditures in a way that will make us even stronger?

CAM: You formed twenty task forces, representing all of the colleges as well as the Library, the Graduate School, Student and Academic Services, and cross-college areas such as Social Sciences and Management Science. They gave you their reports in October. What's happening with those reports now?

KF: Summaries were posted online at the "Reimagining Cornell" website, and we've been having public forums looking at how we can be reorganized as an institution to develop both greater focus and greater visibility.

CAM: How are the leadership responsibilities divided between you and President Skorton?

KF: As the president told me, he gets to make the popular decisions, and I make the unpopular ones. The ultimate decisions reside with the president and the trustees, but they have delegated a lot to me, and I in turn, in some areas, have delegated to the deans and others. The president has invested an enormous amount of time in helping me to understand the budget piece and helping us think about the future. He's given me his input and told me that I now need to make some decisions, which we'll announce to the campus. Many decisions will be made in the units, but we're trying to make sure that people know that the president and I are accountable and ultimately responsible for everything in the cost-cutting process and the plan for the future.