New TV comedy brings actor-athlete back to the gridiron

New TV comedy brings actor-athlete back to the gridiron

Typically, the best players make the worst coaches," says Ed Marinaro '72. If that's the case, then it's a good thing that old Number 44, who set seventeen NCAA records as a Big Red running back and finished a close second in Heisman Trophy balloting, isn't actually a coach. He just plays one on TV.

In "Blue Mountain State," a half-hour comedy series debuting January 12 on Spike TV, Marinaro plays Marty Daniels, the gruff patriarch of the fictional Blue Mountain State Mountain Goats, a college football program that has produced seventeen national titles and (one is led to assume) countless NCAA violations. Described as a hybrid of Animal House and Varsity Blues, "Blue Mountain State" follows the juvenile exploits of three first-year students: a backup quarterback more interested in women than sports, a blue-chip recruit with a gold-digging girlfriend, and a hapless chap who aspires to be the team mascot. It is a show about freshmen, but it is unabashedly sophomoric—less Rudy, more rude and crude. "Obviously, this is not the comedy that I grew up doing," says Marinaro, who made his first TV splash as building manager and part-time stuntman Sonny St. Jacques on one of the final seasons of "Laverne & Shirley." "This is twenty-first-century comedy targeting twenty-one-year-olds. But it's fun."

Marinaro is best known for his Eighties stint as Officer Joe Coffey on "Hill Street Blues," and he continued the police theme in many subsequent roles, including turns as a vice cop, a homicide detective, a private eye, an ex-cop, even the husband of a cop. But you don't survive long in Hollywood—or last six years in the NFL—without showing some versatility. He has also played a school counselor, an auto mechanic, a former Olympic skier, a plastic surgeon, a fashion photographer, and a fishmonger.

In fact, this isn't his first role as a football coach. In "Gift of Love," a 1999 TV movie based on a true story, Marinaro co-starred with Debbie Reynolds as the coach of a young player who donates a kidney to his grandmother. "I guess I have some credibility, having been in that world," says Marinaro, who received some fifty scholarship offers before choosing Cornell. "It's easier for me to draw on my personal experience because of all the coaches I've had." 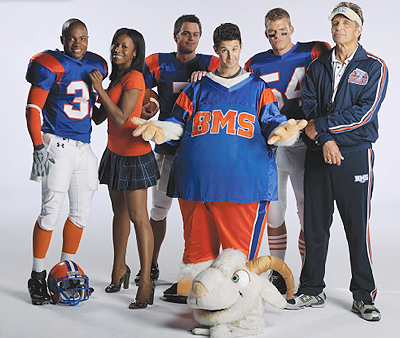 The Mountain Goats' Marty Daniels is essentially a coaching caricature. Off the field, his personal life is a shambles; his ex-wife is married to his nemesis, the school's dean. Football is his religion. "Once upon a time, some weak, pathetic [expletive] coined the phrase 'Winning isn't everything,' " he tells the team in a motivational speech that, like a fair bit of his dialogue, is laced with language unsuitable for network television. "But I'm not one of those people—and this is not one of those situations." Of course, Daniels—who berates his players and bends the rules—is nothing like Jack Musick, who led the Big Red to an Ivy title in 1971. Marinaro says that early in his career, coaches were hesitant to heap praise on him, lest he get a swelled head. "But Jack told me how good I was," he says. "I would have run through a brick wall for the guy."

Would Marinaro have considered coaching? Not likely, even if a foot injury hadn't ended his playing days at twenty-eight, and even if his friendship with quarterback-turned-actor Joe Namath hadn't inspired him to try Tinseltown. "My major in college was hotel and restaurant management," says Marinaro, who turns sixty in March. "I'm sure I would have been able to get involved with that industry in some capacity. I probably wouldn't have moved to Los Angeles. My life would have been different. But I don't think I ever would have wanted to coach. I didn't want to be on the periphery of something that I had been central to." But on TV, there he is: standing on the 50-yard line telling his wide-eyed troops, "We don't just beat our opponents. We crush their will to live." Marinaro admits to having some flashbacks while filming the football scenes. "It's kind of interesting," he says. "I guess you call it the circle of life."

More than three decades ago, he notes, his transition from football to acting began inauspiciously. One of his first auditions was for a beer commercial, in a non-speaking role as a gridiron star. "I didn't get the job," says Marinaro. "They said I didn't look like a football player."

TOP HONORS David Auble '60, MBA '62, one of Cornell's all-time leading wrestlers, will be inducted into the National Wrestling Hall of Fame in June. A 1980 selection for the Cornell Athletic Hall of Fame, he was a two-time NCAA champion (1959, 1960) and three-time Eastern champion (1958, 1959, 1960) while going 51-1 in varsity competition. Auble, an Ithaca native, coached wrestling after graduation, serving as an assistant at Cornell, Michigan State, and North Carolina State and as head coach at UCLA and Campbell University.

THE COMMISH Noreen Morris '87 will become the fourth full-time commissioner of the Northeast Conference when she takes over the position in January. Morris joins the 12-team conference of schools in New York, Connecticut, New Jersey, Pennsylvania, Rhode Island, and Maryland after spending five years at Northwestern University. She was a four-year letter winner and two-year captain of the women's soccer team at Cornell.

HOME ICE ADVANTAGE A loss at Lynah Rink by a highly ranked visiting hockey team can hardly be described as big news—but it is unusual when the teams are made up of women. Coached by former Big Red star Doug Derraugh '91, the women's team opened its ECAC home season by beating sixth-ranked Dartmouth, 3-0; ninth-ranked Harvard, 4-3; and second-ranked Clarkson, 2-0. The wins over Harvard and Dartmouth marked Cornell's first-ever sweep over the pair. At press time, Cornell was ranked sixth in the nation.

FULL SAIL The student-run Cornell sailing team picked up a pair of impressive wins this fall, taking first place at both the Cary-Price Regatta in Michigan and the U.S. Naval Academy Small Keelboat Invitational in Maryland. Phil Alley '12 and Colleen Cozzens '12 led the way in Michigan, winning six of their ten races to dominate the A Division. In Maryland, Vince Andrews '11, Connor Fitzpatrick '13, Allie Gardiner '11, and Mike Rivlin '13 teamed to win seven of the 12 races.

NUMBERS GAME Despite its long record of success, the men's hockey program has never retired a jersey number—until now. On February 26, Ken Dryden '69 and Joe Nieuwendyk '88 will have their numbers raised to the rafters, never to be worn at Cornell again. Dryden, number 1, led Cornell to three ECAC titles and the 1967 national championship. He went on to win six Stanley Cups with the Montreal Canadiens and has been a member of Canada's Parliament since 2004. Nieuwendyk, number 25, was the ECAC Rookie of the Year in 1985 and the league's Player of the Year in 1987. He left after his junior year to play in the 1988 Olympics and then began a pro career that spanned 21 seasons and three Stanley Cups with three different teams. He is currently the general manager of the NHL's Dallas Stars.

ON PAPER The ups and downs of the Big Red's 2005-06 men's basketball season are chronicled in Outside the Limelight: Basketball in the Ivy League by Kathy Orton, recently published by the Rutgers University Press. The book focuses on four teams—Penn, Princeton, Harvard, and Cornell—and threads the story of the league's history through a week-by-week account of that year's competition.

The men's basketball team—favorites to win a third straight Ivy League championship— got their season off to a great start by traveling to Tuscaloosa, Alabama, and stunning the hometown fans by defeating the University of Alabama, 71-67. All five of last year's Big Red starters returned, and they showed their experience against a talented but young Crimson Tide squad. Ryan Wittman '10 led all scorers with 23 points, including five-of-eight shooting from behind the three-point line. The win was especially sweet for senior guard Louis Dale, a native of Birmingham, Alabama, who had many friends and family members in the crowd.

Two years ago, the men's hockey team faced the Boston University Terriers in the first "Red Hot Hockey" game at New York's Madison Square Garden. For the Big Red, it was a huge success everywhere except on the scoreboard. There were pre-game and post-game Cornell rallies, and the sold-out "World's Most Famous Arena" echoed to the raucous cheers of the Lynah Faithful. BU's team was unfazed, however, jumping out to an early lead and eventually winning 6-3.

This time, the arena was again sold out, with Cornell fans outnumbering the BU contingent by about two to one. And, again, there were numerous get-togethers before and after the game. The contest began with a ceremonial puck-dropping by Cornell President David Skorton and BU President Robert Brown (above), with the school's mascots looking on. But this time it was the Big Red who took the early lead, going ahead 2-0 in the first period on goals by Sean Whitney '12 (whose brother had played for BU) and Locke Jillson '12. A power-play goal by Blake Gallagher '10 in the second period pushed Cornell's lead to 3-1, but BU tallied twice late in the third period to knot the score at 3-3. Neither team scored in the five-minute overtime, and the game ended in a tie. 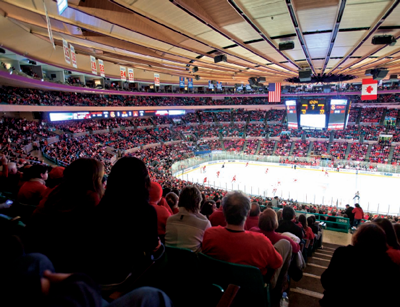 Red Hot: More than 18,000 fans filled Madison Square Garden for the November 28 contest between Cornell and Boston University. Before the game, there were many alumni get-togethers, including a performance by the Big Red Pep Band aboard the USS Intrepid (below left) and a Rinkside Rally complete with face-painting (below right). 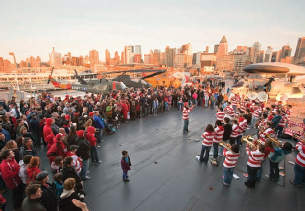