Anatomy of an ag epidemic

Anatomy of an ag epidemic

Few people extol the virtues of the tart, firm green tomato—especially in August, when the luscious red, orange, and yellow of ripe fruits beckon. But in the Northeast, this year was different. Home gardeners, small organic farmers, and even many large, conventional growers were lucky to have edible tomatoes in any hue. Most backyard hobbyists spent the month of July—usually reserved for pruning and trellising while daydreaming of gazpacho, salsa fresca, and thick slices of heirlooms layered with fresh mozzarella—stuffing their beloved vines into garbage bags, testing green tomato recipes, and nursing a kinship with those nineteenth-century immigrants driven west by the Irish Potato Famine. 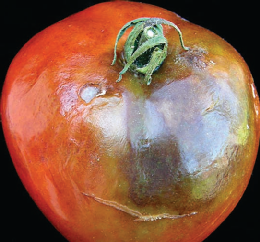 Blame Phytophthora infestans, a.k.a. late blight, a virulent fungus-like organism native to the mountains of central Mexico that taints tomatoes and potatoes, the darlings of the Solanaceae family, as well as myriad other nightshades including petunias and bittersweet. The parasitic organism chalked up its first widespread U.S. kills in the early 1840s in an outbreak that stretched from Maine to Virginia and west to Ohio. Two years later, spores made their way across the Atlantic to wreak havoc in Ireland. Today, late blight afflicts growers in North and South America, Europe, Asia, and Africa, costing American potato farmers between $250 and $500 per acre in chemical controls and crop losses. "Late blight is one of the most dramatically destructive plant diseases known to man," says plant pathologist and dean of the faculty William Fry, PhD '70, who began his decades-long inquiry into the epidemiology and control of P. infestans as an assistant professor on the Hill in 1971.

Late blight flares episodically, but bright sun and dry weather typically hold epidemics in check until summer's end. Not this year, with its record-breaking rainfall and unrelenting damp. A preliminary report from Long Island on June 23 launched an investigation by Cornell plant pathologists and Cooperative Extension agents throughout the state. Within days, they had confirmed the disease on tomato plants in all four Tompkins County bigbox garden centers. By early July, infections had been confirmed in fourteen New York counties as well as New Jersey, Maine, Vermont, and Connecticut. "We've never seen anything like this, with infections all over the Northeast so early in the season," says Fry, who calls the distribution via big box "magnificent" for its efficiency at spreading the blight to gardens throughout the region.

Symptoms of infection typically take three to four days to become visible to the naked eye. Advanced damage is unmistakable: vigorous plants develop greasy brown lesions on foliage, stems, and fruit. Soon after, each lesion turns fuzzy white and begins releasing as many as 300,000 wind-dispersed spores. While the microscopic reproductive bodies survive a mere hour exposed to the sun, they can last weeks in the soil. A gentle breeze on a damp, overcast day can easily distribute viable spores across twenty-five miles in a single afternoon.

Plant pathologists and farmers alike use the term "meltdown" to describe what happens next: entire fields collapse in a brown heap. "Late blight is so aggressive that when it moved into fields, it was one week from 'I think I have it' to 'everything's gone,' says Hudson Valley organic farmer Ron Khosla '91, who runs Huguenot Street Farm with wife Kathryn Anderson Khosla '97. "As organic farmers we're supposed to push the idea that healthy soils and plants can fight off infection. That's not true in this case—it's too aggressive." While their field tomatoes were largely eradicated in mid-July, passive solar greenhouses kept the bulk of the Khoslas' tomato plants dry throughout the season, preventing total losses.

Conventional farmers in the U.S. rely on more than 2,000 tons of prophylactic fungicide annually, and some organic growers use copper-based sprays to keep spores from contact with fruit and foliage. But once late blight takes hold, the only recourse is destruction of affected plants to slow the epidemic. While home gardeners wield garbage bags, large-scale growers resort to mowing, fire, and deep plowing. In mid-August, when Starflower Farm proprietor Andrew Leed '81, who manages the CALS greenhouses, discovered late blight in the plot where he grows certified organic seed potatoes, he burned the plants to the ground. "If blighted tubers survive storage to sprout, the resulting plant could produce spores early in the growing season," he says. "Because I sell organic seed to organic growers, I didn't feel comfortable taking chances— organic growers don't have the chemical tools conventional farmers do."

For home gardeners, 2010 promises fewer risks—the weather will almost certainly be sunnier and drier, and because P. infestans only overwinters on living plant material, the risk of contamination from this year's epidemic is limited. Fry says he has never been able to isolate spores on seeds collected from infected tomatoes in his laboratory—though he cautions extra care with potatoes, which can harbor the disease on tubers missed in the fall harvest, survive over the winter, and sprout early to spread spores in the spring.

Plant breeding researcher Michael Glos is at work on a study with plant pathologist Keith Perry, PhD '89, to assess performance of potato varieties under organic management across the state; Glos and his wife run Kingbird Farm, where organic potatoes constitute about 5 percent of annual income. Yields this year were about 50 percent lower than in 2008. Still, he sees a silver lining in the data this year's outbreak could provide about relative susceptibility of heirloom varieties. "We could never do a study where we said, 'OK, on the tenth of August we're going to infect your farm; tell us how it goes,' " says Glos. "It's making lemonade out of lemons."