The way Ernie Berger '65 tells the tale, it was a bit of a Christmas miracle, albeit in April.

It happened in spring 2003, four years after the death of Darcy, his wife of thirty-two years. After living in Atlanta for nearly two decades, the couple had just purchased a seaside condo in Gulf Shores, Alabama, when Darcy was diagnosed with pancreatic cancer. Upon her death fourteen months later, Berger moved into the condo, still grieving her loss.

On this particular morning, Berger's thoughts turned to the Atlanta hospice where Darcy had spent her final days. He remembered how much the care and comfort had meant to them and their four children. He recalled the infant in the hospice's pediatric section, a three-month-old girl whom he had held in his arms as she succumbed to an inoperable brain tumor.

Then, as Berger watched the sun come up beyond the waves, an epiphany came with it. "I put my feet on the floor," he recalls, "and I said, to a completely empty condominium, 'I'm going to grow my beard and become a hospice Santa Claus.'" 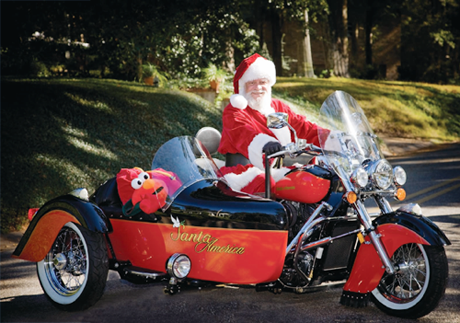 He called two area hospices and asked if they would be interested. Both said they had never heard of such thing. "Well," Berger asked, "would you like one?" And that's how Santa-America was born.

Five years later, it is the largest volunteer Santa service organization in the world, with nearly 200 volunteer St. Nicks (along with some 125 Mrs. Clauses and elves) in forty-seven states and seven countries. To put those numbers in perspective, Berger estimates that there are about 4,000 people in the U.S. who take Santa to the major-league level—growing their beards, working in malls, appearing in television ads. They wear custom-tailored leather-and-velvet outfits with the faux fur, the gloves, the boots, the big shiny belt. Nearly 5 percent of those serious Santas are members of Santa-America, whose ranks are growing by about three per month.

Berger, a graduate of the School of Industrial and Labor Relations who worked in human resources for General Electric and then in health-care management, is proud that most of the Santas featured in national television ads supplement that for-profit work by volunteering for Santa-America. And it isn't only a December enterprise. Says Berger: "There is no day of the year when a visit by one our Santas doesn't take place somewhere."

The core mission is simple: Bring a beloved icon into the process of palliative care and bereavement. Send Santa to homes, hospices, hospitals—to visit the family of a police officer killed in the line of duty ten days before Christmas, for instance, or the children of a man suffering the advanced stages of Lou Gehrig's disease. This year, Santa-America added two initiatives: a venture with the Autism Society of America that includes joint fundraising and Santa visits for children with autism, as well as a relationship with the Wounded Warrior Project, which provides programs and services to severely injured service members as they transition to civilian life. The Santas are focusing on the trauma often suffered by the veterans' children.

Berger, who visits some two dozen families annually (he's known as Santa Ernest when he dons the red suit), personally comforted more than 2,000 children who were displaced by Hurricane Katrina along the Gulf Coast in Alabama and Mississippi. His favorite tale concerns the Hurricane Hug, quilted artwork designed from a photograph taken when a young boy wrapped his arms around Berger. The child hadn't spoken in eight months, since hearing his best friend and the friend's mother drown in the house next door. But upon seeing Santa Ernest, he started talking nonstop: "You're alive! I thought you were dead! How are the reindeer? I'm living in a new place. I don't have a chimney anymore…"

These days, Santa-America ambassadors give each child a manufactured Santa Hug, a fleece scarf with mittens sewn at the ends. "They can put their little hands in the mittens," Berger says, "and give themselves a hug from Santa Claus when he's not around." Santa also gives them a copy of An Angel in the Sky, a kids' picture book about coping with death and bereavement.

What about secularism? Cynicism? Teens who are too cool for Santa? Not an issue. "I don't think we ever lose our belief that there will be someone who personifies love and hope and joy," says Berger, adding that Santa-America members "are people of faith, generally, but we're not a faith-based organization."

Berger points out that his collection of jolly old elves (who are screened for everything from drug addiction to child abuse and undergo at least eighteen hours of training) include Jewish Santas, Muslim Santas, a Buddhist Santa, even a Wiccan Santa. There is an ex-Green Beret, as well as the only St. Nick in the nation who wrote his doctoral thesis (in child psychology at the University of Texas) on Santa Claus.

What's missing? Ivy League Santas. Says Berger: "I may be the only one."