Emptied of bustling summer crowds, the picturesque clapboard villages on the Eastern end of Long Island have a ghost-town quality in the winter. But beneath the calm waters of Peconic Bay, a vibrant population spawns by the thousands, thanks to the efforts of Cornell Cooperative Extension. Long known for its beaches and wineries, the North Fork was once home to a thriving seafood industry—specifically oysters, clams, and the finicky bay scallop. Responsible for re-seeding the once-decimated surrounding waters with shellfish, the marine division of Suffolk's Cooperative Extension has become a model for other waterfront communities looking to reclaim their underwater industries. 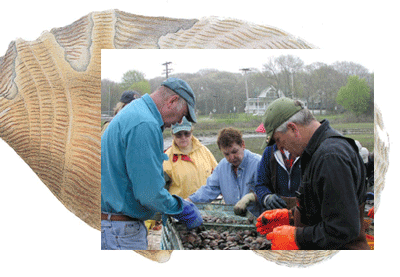 Locating the marine division's headquarters in the town of Southold isn't easy; the local hardware store marks a turn down a narrow lane that ends in beachfront and a collection of low buildings. Inside, the lingering smell of salt-water and seaweed are the only indication of what the collection of empty tanks, tubs, and beakers will hold. Within a few weeks, they will be a breeding ground for millions of microscopic infant shellfish (known as "seed"). The success of the program is due in large part to the efforts of volunteers, managed by marine educator Kim Tetrault. Hired by Coop Extension fifteen years ago to help revive the North Fork's wild scallop population, Tetrault became obsessed with getting the local community involved in cultivating the once-prevalent shellfish stock, which had fallen prey to overharvesting, severe storms, and a bizarre natural phenomenon known as "brown tide," caused by an invasive algae that destroys the mollusks' ability to feed.

Shortly after settling in, Tetrault invited the locals to an open house in his hatch-ery to witness live shellfish spawning—and they were hooked. Known as the Southold Project in Aquaculture Training (SPAT), the resulting program is a nonprofit division of Cornell Cooperative Extension's marine branch. It's run entirely by Tetrault and his small army of helping hands, which last year totaled 284 dues-paying participants who logged a combined total of just over 15,500 hours of labor.

Each year, SPAT re-creates the water conditions of a warm spring, tricking a few hearty specimens into releasing their reproductive matter, which is then combined to create seed. (Researchers have even been known to light candles in the lab to set the mood. Whatever they're doing, it works; seed numbers have been known to reach billions.) Members work year-round, building equipment like rowboats, skiffs, and a device called a "floating upweller" that Cornell has pioneered as a method of incubation for young, microscopic shell-fish, which benefit from constant water flow. The seed attach to a mesh screen, through which water containing the algae they consume is pumped from below.

Volunteers are paid in allotments of that same seed, which they can grow at home if they have access to waterfront or in "community garden" waters maintained in the reed-lined inlet behind SPAT's facilities. "SPAT is 100 percent non-commercial," explains Tetrault. "You can eat it, you can give it away, you can throw it back into the water, but you can't sell it and you can't barter it—ever." But the edible benefits are secondary for many volunteers. For retiree Kathleen Becker, a charter member, the program fulfills a lifelong goal. "When I was working in Manhattan I always used to say I wanted to do something for the environment," she says. "I had been out here several years when I saw the ad in the paper, and it grabbed me. Now I like to think of myself as a steward for these waters."

In its ten years of existence, the program has inspired a resurgence of concern for the health of the local waters and appreciation for the briny delicacies they harbor, in addition to launching a handful of commercial operations. Pipes Cove Oyster Company founder Ed Jurczenia '66 was a volunteer during that first SPAT season— training that gave him and his wife, Dar-line Duffy '79, the experience to realize Jurczenia's lifelong dream of growing oysters in the cove behind Greenport's Silver Sands Motel, the family business his mother built in 1947. "At one time there was a huge oyster industry in this community, and then for about thirty years there was none," says Jurczenia, who remembers not being able to walk in the bay as a child without stepping on oyster beds.

The couple planted the 2,000 Eastern seed oysters that Tetrault gave them and hoped for the best. Fourteen months later, they discovered that not only had their entire crop survived, but that it yielded a distinctive, saline oyster—a result of the unique mix of ocean and freshwater in the bay, referred to by foodies as the "merroir," the aquatic equivalent of wine's terroir. (All oysters grown on the Atlantic Coast are the same species, known as Eastern Oyster, while regional names like Bluepoint and Pipes Cove come to stand for different characteristics like shell shape and minerality.) Though Jurczenia and Duffy's commercial status now makes them ineligible to receive seed from SPAT, they support the program in other ways—like hosting the annual volunteers' party, where its success is on display in the form of a raw bar numbering in the thousands.

For Tetrault (who also performs in a band called Jazz on the Half Shell), SPAT is a perfect embodiment of Coop Extension's mission. "The mandate is to give people knowledge they can use," he says. "It used to be all Ag programs out here, but about twenty-five years ago someone looked around and said, 'Wow, there's a lot of water.'"