After a tour through the dog runs, Bollen takes them over to the adoption center— and points out that even the new shelter has its drawbacks. While the cats' colony housing has many advantages, she says, it's important to monitor them to make sure none of the animals is stressed or getting bullied. Those sunny dog condos with their welcoming windows? They allow the dogs to see each other across the hallway, but not interact—causing a condition known as "barrier frustration." And while chain-link may be ugly, it allows dogs to use their primary means of understanding the world—their noses—while the windows only have a small "sniffer hole." Even in a model shelter, Bollen tells them, there's always room for improvement. 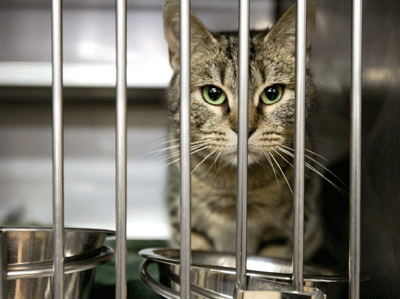 "It's nice to see a good example of a shelter—a standard to measure things against, to be more aware of the issues," says student Julia Gray, who plans on a career as a large animal vet but also wants to volunteer at shelters. "I had no idea of the statistics." Classmate Adrienne Barnard echoes her shock at the euthanasia numbers and other realities that Bollen shared—like the fact that in New York City, the mandatory hold period before a stray animal can be put down is just two days. "It's eye-opening," says Barnard, a Lake Placid native who spent eight years as a veterinary technician and plans to pursue small animal medicine. "At Cornell, we're so used to people who spend $3,000 on their cat. It's easier to forgive someone for not doing the gold-standard of treatment when you see animals that are just trying to make it."

Two weeks later, three more students come to the shelter to spend the morning with Elizabeth Berliner, DVM '03, director of clinical programs for the Shelter Medicine Program. After a briefing in the employee kitchen similar to the one Bollen gave, Berliner takes them on a tour of both the old and new facilities, this time focusing on medical rather than behavioral issues. "How do diseases get passed in a shelter—what's the most common way?" Berliner asks them as they view the rescue center's cat room.

Berliner nods. "We are the fomite. We are the problem," she says. "It's important to remember that, not only in shelters but in private practice as well." She goes on to talk about the management of diseases like upper respiratory infections, a constant worry in shelter cats. "The goal is to move the animals through the system as quickly as possible, monitoring for disease, and pulling them if necessary," she says. "It's all about preventing what you can prevent, and treating what you can't."

Over at the adoption center, Berliner takes them inside a dog condo and asks, "What do we like about it?"

"It's not very loud," Gollon says.

"You can clean it pretty quickly," says Justin Milizio, a third-year from Long Island.

"Okay," Berliner says. "Now what are the problems?"

"You can get a fishbowl effect—you're on display," says Gollon.

"You have limited opportunity for social interaction," Bazzle adds.

Berliner agrees. "It can be a little claustrophobic," she says. "I always have people come in here, close the door, and stay here for a while in perfect silence."

Everyone stops talking, and an eerie hush falls over the room—not completely quiet, but with a disorienting sense that you're inside a corked bottle. "This is beautiful," Berliner says. "But every type of adoption space has different challenges for individual dogs. As a vet, you have to weigh the costs and benefits of every decision you make."

Senior editor Beth Saulnier is a former board member of the Tompkins County SPCA and a current volunteer staffer at the shelter's cat adoption annex.