A morning at the SPCA gives vet students a chance to do exams, give shots— and even name a puppy

Our goal here is to do the intake on these animals, and nobody gets hurt—there's no extra credit for giving blood," says Vet college professor Elizabeth Berliner, DVM '03, with a smile. "If an animal seems to be stressing out, the SPCA would rather not have us look at it than to push it."

In an exam room whose cheery yellow walls are festooned with painted pawprints, Berliner is leading three students— Lisa Bazzle, Kate Gollon, and Justin Milizio—in doing health checks of newly arrived animals at the Tompkins County SPCA. They divide the labor, with Berliner taking notes and the students rotating the jobs of doing the exams, acting as a vet tech, and wrangling supplies.

First up is a cat named Cora, a petite two-year-old female who's white and tan with light pinkish-grey tiger stripes. She was adopted from the shelter in January but returned; the new owner claimed to be afraid that she'd knock a toy into a heater and cause a fire, an excuse the students find less than compelling. "Beautiful cat," Milizio says. "Her eyes look fine—she has a normal PLR [pupillary light reflex]. Her ears have a little bit of stuff in them."

"What kind of stuff?" Berliner asks. "Describe your stuff." "

Light brown, but there's not that much accumulation. It's not like it's coffee grounds," he says, citing no evidence of ear mites. "Her lymph nodes aren't enlarged. I don't see any evidence of tapeworms." He takes the cat's temperature, checks its heart rate and respiration, and the animal is weighed.

"Did you feel a spay scar on her?" Berliner asks. "With cats it can be tricky, because their scars are small and their belly buttons can feel like scars, so sometimes you have to shave; I've even had to sedate to shave. She came from here, so I'd be shocked if she weren't spayed, but you should always check. They could have returned a different animal—who knows?"

At the Tompkins County SPCA, all pets are given a microchip before adoption; it allows shelters and vet offices to identify a tagless animal by running a scanner over its back to reveal a code number. Berliner realizes that they haven't yet checked Cora. "When you're working in a shelter, you want to have a set order of things," she points out. "If you're doing twenty cats, you can forget what you did on each." She gives Milizio the scanner, a plastic handset with a circle at one end. "Tell us the two key words for scanning."

"Slow and serpentine," he says.

They determine that the code number matches Cora's file. Since the cat's temperature was normal—101.0—she's deemed healthy enough for her distemper vaccination; she had a rabies shot during her previous shelter stay. They give her deworming pills, which they coat in a glob of bright orange "squeeze cheese." As the supply person, it's up to Bazzle to make Cora a new collar; since Gollon has done these exams through Cornell's Shelter Medicine Club, she offers tips for writing the cat's name in flowery script and garnishing the collar with stickers. "Decorate it," says Gollon, herself clad in a hot pink scrub top festooned with cartoon cats. "Bling it out!" 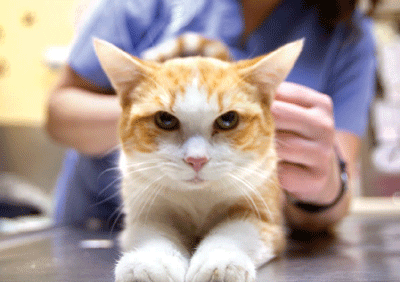 Newly adorned, Cora is returned to her cage, and Berliner coaches them in preparing the room for the next patient. "We've got the cleaner, we ditch her towel—every cat gets its own towel," she says. "The table gets a wipedown, all the instruments get a wipedown, and we get a scrub-a-dub with our hands. OK, next victim!"

Over the rest of the morning, the students see several more animals, starting with a scruffy, longhaired stray tomcat. He doesn't have a name, so the students get to pick one—one of the job's most prized perks. Since he has seven toes on each paw, they dub him "Thumbs." Bazzle, who's conducting the exam, notes that he has scabs above each eye, which Berliner says could be due to self-injury against the bars of his cage.

"His right kidney's very easy to palpate, his left one not so much," Bazzle says. "I still can't feel his left one."

Berliner explores his abdomen. "That's because you've got a matt over the top of it," she says. "That was throwing you off."

The purring animal takes it all in stride—until it's time for Bazzle to draw a blood sample to test for feline leukemia (FLV) and feline immunodeficiency virus (FIV), and he starts to howl. "Hi, baby," Berliner says soothingly. "Think about bunnies! OK, kitten!" With the help of a towel, the students get him under control and Bazzle draws the sample, which comes back negative for both diseases. "Nice restraint, Justin," Berliner says. "Nice save, Lisa."

Next they examine a black and white male cat, found as a stray; deciding he needs an "old-man name," they call him Henry. Milizio's exam hits a snag when he can't identify one of the cat's internal organs.

"He's got a ball-like thing, soft, maybe a little oval-shaped," he says.

Berliner checks for herself. "You've got a large, mid-abdominal, soft, round body that is smooth and somewhat moveable," she says. "I'm going to tell you it's a normal structure. So you need to tell me what it is. This is a great lesson for you."

"Is it the prostate?" Milizio asks. "No, but you're close," Berliner says. "You're in the right system."

"Because it's huge," she says. "That is what a very large bladder feels like in a cat that is holding his urine—probably because he's in a shelter and he doesn't like having a litter box."

As they're wrapping up the exam, Milizio apologizes for his confusion. "I feel stupid about that bladder," he says.

"Don't," she says. "It's much better to have a case like this now than a year from now."

Henry is carried out, and in comes someone even cuter: a two-month-old mixed-breed puppy. Much cooing ensues, as Berliner leafs through the dog's medical file. "Oh my goodness, it's your lucky day," she tells the students. "She doesn't have a name yet. You're in a very powerful position."