Bidding adieu to a Collegetown icon

Bidding adieu to a Collegetown icon

A Collegetown landmark vanished in March when the Johnny's Big Red Grill sign was removed from its long-time perch above Dryden Road. The two-story sign—its jolly bear cub smiling, waving, and sporting a Cornell letter sweater—bathed the block in rosy neon for more than five decades. According to the company that owns the property, the sign was removed after the Ithaca Fire Department expressed concern about the state of the building's brick façade. When the sign came down for the façade repairs, it proved to be in sorry shape. "The sign has been deteriorating," says Joe Price '95, MS '98, facilities manager for the Ithaca Renting Company. "It would have needed some serious restoration." 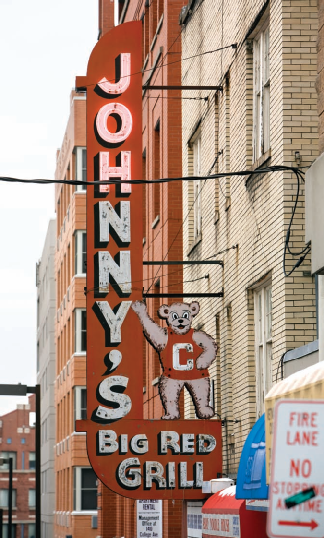 The sign's disappearance prompted many a Cornellian to wax nostalgic about it and the restaurant it advertised—Johnny's, which opened as a coffee shop in 1919 and eventually became a popular eatery and bar serving Italian and American favorites. It was run by John Petrillose Sr. and his wife, Ruth; their son Bob would eventually carve out his own place in Cornell culinary history as the founder of the Hot Truck, initially located outside the restaurant. "That sign meant something—a nice, comfortable, no-hassle meal," says Gould Colman '51, PhD '62, the University's archivist emeritus. "Mrs. Petrillose was like a mother waiting for us at the door. It had a reliable menu of good, solid stuff that ex-soldiers felt comfortable with."

In its heyday, Johnny's fed both town and gown; it welcomed professors, athletes, grinds, local businessmen, and just about everybody else. With its name changed to Guido's, it became a setting for Been Down So Long It Looks Like Up to Me by Richard Fariña '59, who hung out there with his pal Thomas Pynchon '59; famous folkies like Peter Yarrow '59 and Harry Chapin '64 played there. Although the original restaurant closed in 1981, when the family sold the building, the bar half eventually reopened under different ownership and remained popular with students through the Nineties. As an undergrad, Price lived in one of the apartments above, whose windows looked out at the sign. "It was awesome," he recalls. "We'd sit in the living room on Friday afternoons and wait for the sign to light up, which meant the bar was open."

And as for the sign itself: according to Price, it was given to an anonymous private collector—someone with the space for an objet d'art that's some twenty feet high and weighs 2,000 pounds. Apparently, Price says, he plans to sell it on eBay.