Ryan Wyatt '90 vividly remembers his first experience peering up at a man-made sky. He was seven years old, having made the trip from his native Indiana to the Adler Planetarium in Chicago. "I was terrified, because I learned that the sun was going to die," he recalls. "That was a little distressing."

These days, with the evocative title of Director of Morrison Planetarium and Science Visualization at the California Academy of Sciences, it is Wyatt's job to create similarly memorable experiences (though hopefully more edifying than terrifying). His mission is to design eye-popping tours of the universe while offering a captivating storyline; it's science as show business. His inaugural production—"Fragile Planet," a half-hour round trip to the outer reaches of the universe—was narrated by none other than Sigourney Weaver, star of Alien and Avatar. 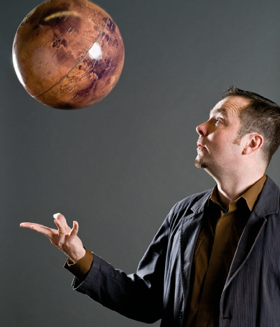 Located in San Francisco's Golden Gate Park, the planetarium made history in 1952 by introducing the nation's first opti-mechanical star projector. In 2008, about eighteen months after Wyatt arrived, a $20 million reconstruction put it once again on the cutting edge. The new theater, Wyatt says, "has the potential to make an extraordinary mark on the planetarium field in general." Morrison's seventy-five-foot-wide screen, housed in a ninety-foot-wide dome, matches Griffith Observatory in Los Angeles as the largest in North America. But it isn't just size that sets it apart; it's the immersive experience.

Traditionally, planetariums have used a star projector and lasers to emblazon a night sky on the dome. But there are no lasers here; Morrison is the world's largest all-digital planetarium. Images from six video projectors are blended to form one picture on the giant screen. The entire projection surface essentially amounts to what Wyatt calls "the largest computer monitor in the Academy," meaning the dome can serve as a blank canvas for various digital media.

In a conventional planetarium, audience members surround the star projector, as if sitting around a campfire, leaning back and craning their necks toward the heavens. But Morrison's dome resembles a steeply sloped movie theater, with the audience facing in the same direction beneath a dome that is tilted at a thirty-degree angle. "It's comfortable, and you feel like you're flying through space, so it's more of a shared theater experience," says Wyatt, sitting in his tiny office surrounded by books with titles like Galileo's Daughter and God Created the Integers. "Getting the science right is part of it, but you also want to tell a good story, something that carries people along intellectually and emotionally."

In doing so, Wyatt calls upon the skills he learned on the Hill—not just as an astronomy major but also as a Daily Sun staffer. He was a news reporter, music reviewer, and editorial cartoonist—all of it useful as he writes a script, chooses a soundtrack, and oversees the translation of scientific data into convincing imagery. In his previous position, as science visualizer at the Rose Center for Earth and Space at the American Museum of Natural History in New York City, Wyatt was part of a team of experts—with experience in television, visual effects, and computer graphics—that produced shows on topics ranging from cosmic collisions to extraterrestrial life. That team approach, which has been replicated at Morrison, was one of the primary attractions luring him to the Bay Area, the visual-effects capital of the world. In fact, many of the people recruited to work for him are Hollywood special-effects gurus —taking time off from, say, digitally polishing Iron Man's armor to craft a fly-through of the Milky Way.

Wyatt was also enticed by the opportunity to help design Morrison's infrastructure with an eye toward flexibility, conceiving new ways it could be used to support the myriad interests of the Academy of Sciences—a research institution whose public face includes a natural history museum, an aquarium, and an indoor rainforest. Thus, the audience might find itself flying through a DNA molecule or cruising along a California fault line. "We're trying to expand the idea of what you see in a planetarium— not just astronomy, but geology and biology," says Wyatt, who earned a master's in space physics and astronomy from Rice University. "We're addressing a much wider range of topics."

Indeed, his latest turn as writer-director—"Life: A Cosmic Story," which premiered in November—discusses how all life on Earth has common origins in the matter that made up the first stars some 13.7 billion years ago. Narrated by Jodie Foster, the production takes the audience inside a cell of a redwood leaf and then transports viewers through time and space through the Big Bang to explore the large-scale structure of the universe. "Science is a truly human endeavor," he says. "Seeing it as a process, rather than an outcome— that's what I find most compelling."