It's been said that the term "music business" is an oxymoron, like "jumbo shrimp" or "open secret"—but for Reid Genauer, MBA '02, the two fit together perfectly. By day, he's the vice president of marketing at eMusic.com and by night an accomplished singer-songwriter and leader of the folk-rock band Assembly of Dust.

Cornell gets a lot of the credit, says Genauer. Although he had already established a reputation as an up-and-coming artist with the band Strangefolk when he arrived in Ithaca, the time he spent at the Johnson School allowed Genauer to reflect and take his work in a new direction. And, he adds with a chuckle, his student loan helped to bankroll the first Assembly of Dust album. 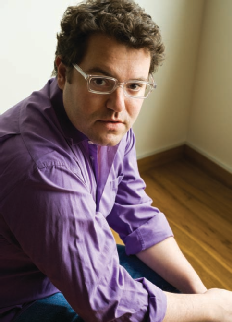 When he arrived at Sage Hall, Genauer wasn't quite sure where his career was headed. But after a few months, "the old urges came flooding back. So I started dipping my toe in the water by playing some local gigs by myself." Much of the new material he developed ended up in the repertoire of Assembly of Dust, which he formed in 2002. They have recorded four CDs, garnering considerable critical acclaim and a loyal following. Their latest effort, Some Assembly Required, features fifteen guest artists, from Richie Havens to Grace Potter and Phish bassist Mike Gordon. Genauer wrote all of the songs (assisted on four by Nate Wilson, the album's co-producer and a former band member) and then set out to find the right artists to complement his work. "Logistically, it was a nightmare," he says. "Deciding who to contact, figuring out how to contact them, finding a studio and a recording date that made sense, producing the track, and then putting it all together… [his voice trails off]. It took a long time."

It could have been a mess, but the strength of the material helps to keep the focus on the songs and not the guest spots. One good example is "Edges," which features the banjo virtuoso Béla Fleck. "That song," explains Genauer, "sort of documents the contrast between the hustle and bustle of people scurrying off to their jobs in the morning versus the homeless people they're walking past. I used to walk from the Upper West Side down to Midtown through Central Park, and I would ask myself, how does somebody come to be homeless and down on their luck? It struck me that the difference between me and any one of these people was tiny—just a little twist of fate would land you there."

Having an array of guest artists on the album made sense on several levels, Genauer says: "Personally, it was a chance to play with people I admire—friends and heroes. Musically, it was a chance to mix up the band's formula, by having a range of musical minds and instruments contributing to the performances. And these artists are better known than we are, so if even a small percentage of their fans are turned on to our music, it's a win. Having gotten an MBA from an esteemed school, I'd have to say that was good business."