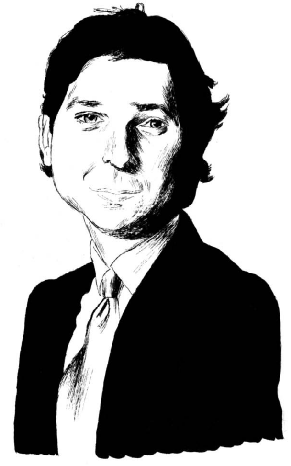 A former Daily Sun editor-in-chief, David Folkenflik '91 is a New York-based media reporter and critic for National Public Radio, regularly appearing on shows like "Morning Edition" and "All Things Considered." While in Washington, D.C., for a month-long training program in multimedia, the longtime Baltimore Sun staff reporter spoke to Cornell Alumni Magazine via cell phone as he walked the streets of the nation's capital.

Cornell Alumni Magazine: Why do we need the media to report on . . . the media?

David Folkenflik: The media is a major institution in American life. It is the prism through which many Americans see what is happening to them and the communities they care about. We should have someone who takes a tough look at this prism and makes sure we're doing our job.

CAM: As a veteran of daily papers, how do you feel about what's happening to them in this era of cutbacks and downsizing?

DF: It's heartbreaking to see once-great papers like the Baltimore Sun, the Miami Herald, the Boston Globe, and the Philadelphia Inquirer become much less ambitious, much more constricted. To simply assign to the Washington Post, the New York Times, and the Wall Street Journal the role of covering national issues is a bit scary. It's at once terrifying and saddening.

CAM: What was it like to report for the Baltimore Sun in its heyday?

DF: It was the chance of a lifetime. The Sun was one of those great metro papers that fought way out of its weight class. It didn't presume that the interests of its readers were necessarily parochial. There were people around me who had covered wars, who would talk to sources in foreign languages. This was heady stuff. When I arrived I was twenty-four, I was downtown at the metro desk, and I thought, Could life get better than this?

CAM: Was it hard to shift from print to radio?

DF: It's humbling, because you're told, "You've done this for fourteen years and now we're going to show you that you know nothing." It was like being a marine and going to Parris Island— you're stripped down and it becomes evident that you don't know how it's done. I wouldn't encourage people to listen to some of my first year's stories.

CAM: How do you feel about the sound of your own voice?

DF: I used to be self-conscious about hearing myself on voicemail messages. You just have to get over it.

CAM: In what way did you have to adapt your reporting style to radio?

DF: I can write beautiful print sentences and read them aloud, but you'd change the channel. It's a different kind of narrative. In newspapers, you might lay out all the evidence you have to support your contention. In a radio story, you have to choose one or two examples. You're making choices, you're compressing. You've got to think differently about the arc of a story. Things have to connect more fluidly. People have so much going on—they're doing the dishes or getting their kids ready for school or driving in traffic. So we have to earn them.

CAM: Why did you go into journalism? DF: In high school, I'd always been interested in politics and government. But when I got to Cornell, campus activism seemed a little histrionic to me. A resident adviser said, "You're pretty mouthy—why don't you write a column for the student paper?" So I did. Then the managing editor said, "These columns are nice, but we're going to show you how to write a news story." And I quickly learned that having a reporter's notebook was like having a passport that entitles you to visit all sorts of places.

CAM: During the presidential campaign, you covered the media covering the candidates. How did it do?

DF: The press was not in real control of the narrative. It was pulled here and there by the campaigns, by events, and frequently by non-conventional media outlets. The woman who broke the story on Obama's remarks about "bitter people who hold onto their guns and God" at a San Francisco fundraiser was a liberal blogger for the Huffington Post. She paid to go to the fundraiser and reported back on it, and it was a huge sensation. There's no way the New York Times is paying $1,500 to get into one of those events. That's not the way conventional political coverage is done.

CAM: You called Sarah Palin "a Mad Libs answer to a Lifetime movie plot." What did you think of the coverage of her candidacy?

DF: It ended up being a burlesque show— the Republicans and the press were kind of co-producers of theatre of the absurd. The Republicans and McCain seemed to embrace her because they felt she would confound the media and tactically under-cut the newness of Obama. The press didn't really know how to react. I felt they were reacting to each stimulus and niblet of information about her as though it were all equally newsworthy. To me, it said they didn't really have any perception as to what was consequential and what was not.

DF: When the Scooter Libby verdict was announced I had to do a live bulletin, which I'd never done before. But they sent me to the wrong floor. So I sprinted to studio 4A and it was closed; I flew down the stairs twelve at a time and ran to another studio, and there was nobody there either. I finally went to the right studio and as they introduced me I was gulping for air. You realize that being composed and having breath to speak are valuable skills.