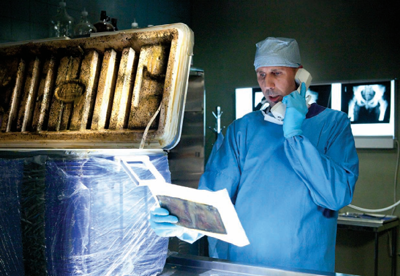 Bob Clendenin '86 is the weird guy, the odd neighbor, the socially awkward coworker. He is a man infatuated with his pet mouse, which he insists can do a spot-on impression of a gerbil. He is an oncologist—who also happens to be a swinger. Sure, when the cameras aren't rolling he is an eminently likeable and decidedly normal guy. But as an actor, he has made a good living by playing characters who are—how best to put it?—off-center.

In fact, Clendenin is one of the busiest character actors in Hollywood. You may have noticed him in bit parts in movies from L.A. Confidential to Dude, Where's My Car? Maybe you've seen his TV commercials for everything from State Farm to Bud Light. More likely, you've caught his appearances on some sixty television shows from "Monk" (the mouse guy) to "Scrubs" (the swinger/doctor). Along the way, he has emerged as a paragon of the subspecies of thespians that have come to be known, affectionately, as "that guy"— recognizable by face, but probably not by name.

Clendenin gladly trades fame for a regular paycheck, a juicy role, and a chance to utter some memorable lines. In a 2006 episode of "Ugly Betty," he played an eccentric fashion photographer who declared, "This child fell out of the ugly tree and hit every branch on the way down." In a 2003 episode of "Joan of Arcadia," he was an electrician who also happened to be God. ("Hey, kid, it's me. You need proof? Fine. Sometimes you like to practice French kissing yourself in the mirror.") In a recurring role on "The Closer," he plays a quirky coroner's assistant who says things like, "Well, decapitations can be tricky because it's a procedure that in most cases will kill a person." 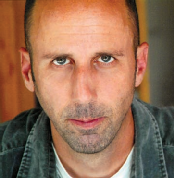 Often, while roaming Burbank (where he lives with his photographer wife, their two sons, and a pug named Helmut), Clendenin will get recognized—sort of. "I love getting approached by someone who says, 'I know you from somewhere,' " he says. "Often it's misdirected. They'll think, Did we go to school together? Do you owe me money? Did you date my daughter?"

Most likely they wouldn't want their daughter dating one of Clendenin's TV characters, many of which have been downright creepy. And at six-foot-two and rail thin, the forty-six-year-old Clendenin happily admits that he looks the part. In fact, he defines a character actor as "the actor whom the audience doesn't want to sleep with." So he is the rare actor without an ego. Equally unexpected is this: amid the Hollywood audition process, he has embraced typecasting. "I think that's absolutely the best thing that can happen to you—to be a strong enough type that the producers and directors know exactly what to do with you," he says. "When you walk in the room, they need to know that you're that weird security guard who lives in the basement."

An Ohio native who spent most of his childhood in Australia, Clendenin arrived on the Hill as a fourth-generation Cornellian. He is the great-grandson of Robert H. Treman 1878—yes, the state park guy. "I tried it several times as a line to pick up women—unsuccessfully," says Clendenin. Technically he was an engineering major, but he discovered acting early on (he co-founded the Whistling Shrimp improv group as a sophomore) and spent most of his time in the theater department, where his roles included Peter Quince in A Midsummer Night's Dream and Launce in Two Gentlemen of Verona. His GPA plummeted accordingly, and Clendenin soon realized that, as he puts it, "the world would be safer if I wasn't designing bridges."

Instead, he earned an MFA in theater from Penn State. After performing in regional theater for a couple of years, Clendenin headed to Hollywood. He'd been told that his unique look ("a euphemism for weird-looking," he says) would play well in the type-specific world of film and television. Indeed, Bonnie Gillespie, a casting director who asked Clendenin to write the foreword to her book, Self-Management for Actors, claims Clendenin succeeded by understanding that, despite all the would-be-chameleons out there, Hollywood is really a town of specialists. "Rather than trying to be all things to all casting directors," she says, "he found his niche and became well-branded as 'that guy' when that's what casting directors needed."

It just so happens that this particular guy has portrayed a parade of misfits— characters with names like Slow Roger ("My Name is Earl") and Louis the Stalker ("Desperate Housewives") and Doofus ("Boomtown"). On several occasions, his scene-stealing performances have turned what was supposed to be a one-and-done part into a recurring role—for instance, his appearances as Earl, the Pricemart employee on "That '70s Show" who always blames his lateness on his dog.

Not that Clendenin, who co-founded the Circle X Theatre Company in Los Angeles, isn't a serious actor. Last January he traveled to Arizona to play several roles in the premiere of To Lenny, With Love, about composer Leonard Bernstein. And in June, he returned to Penn State for a production of Wait Until Dark. But Clendenin relishes the fact that those quirky roles will always be there. "Young, good-looking guys need to have hit it by the time they're twenty-eight, or there's another crop of young, good-looking guys," he explains. "But the weird postal worker lives on."