To the roster of top-flight Cornell sports like hockey and lacrosse, add one more: wrestling. With its own training facility and a singularly dedicated coach, the program has been on the rise over the past decade. In March, the Big Red sent nine wrestlers to Philadelphia for the NCAA Championships, where the grapplers faced traditional Midwest powerhouses as well as rivals closer to home. Could they top last year’s secondplace finish?

In March, Cornell wrestlers went to Philadelphia aiming to cap their squad's decade-long renaissance with an NCAA championship.

With thousands in attendance, the Big Red faced off against Midwest titans as well as East Coast rival Penn State. Could Cornell score the ultimate takedown? 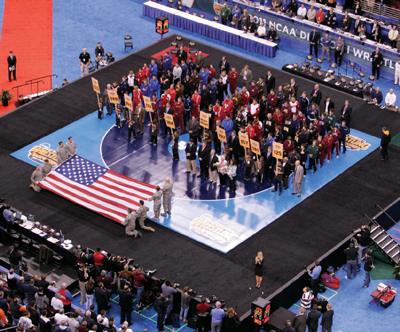 For decades, hockey and lacrosse have been the University's iconic sports, its teams going toe-to-toe with the nation's finest programs. But in the past ten years, a third powerhouse has emerged: wrestling. Last year, at the NCAA Championships, the Big Red finished second—behind only the University of Iowa, a perennial Goliath. This year, Cornell was ranked number one for most of the season. Heading into the national tournament in March, many experts thought maybe, for the first time in fifty-eight years, a team from outside the Heartland had a chance to win it all. Here's how the three-day event unfolded—and how the Cornell program rose to become a national contender.

It's St. Patrick's Day, but there's a dearth of green. Instead, Philadelphia's Wells Fargo Center is a rainbow of allegiances. More than 17,000 fans, largely distinguished by school color (nearly 1,000 of them in carnelian and white), are riveted to simultaneous action on eight mats. In all, over the three days of competition, they will view 640 matches featuring 330 wrestlers (thirty-three in each of ten weight classes) from eighty-six schools. Cornell has qualified nine grapplers for the double-elimination tournament, in every class but heavyweight.

With big crowds in attendance and the national championship on the line, it's an intimidating environment. So yesterday, while the arena was comparatively empty, Big Red coach Rob Koll offered a lesson straight out of Hoosiers. In the movie, Gene Hackman, playing a role based on the real-life basketball coach of tiny Milan High, leads his team into the cavernous arena on the day before the state championship game and points out that the distance from the floor to the rim is still ten feet, just like in their tiny home gym. Koll didn't bother measuring the mat, but he wanted the team to have a feel for the place.

After winning the prestigious National Duals in January and earning its fifth straight Eastern Intercollegiate Wrestling Association championship in early March, Cornell is one of the teams to beat. That's a different kind of pressure, and the competition is fierce. Oklahoma State (winner of thirty-four team titles) and Iowa (three-time defending national champion) are coming on strong. Penn State—the last Eastern team to win a title, more than a half-century ago—is very, very good.

As Koll and his assistant coaches move from mat to mat over the course of nine first-round matches, Frank Perrelli '11, a 125-pounder, nabs Cornell's first win over a wrestler from North Dakota State. "After a day of competition, I'm so emotionally spent that I'm exhausted," says Koll, a former NCAA champion at the University of North Carolina. "And I haven't even wrestled."

Koll had planned on a nomadic career, expecting Cornell to be a stepping-stone. He was out of town teaching a clinic when Big Red head coach Jack Spates called his North Carolina home in 1989 to offer him an assistant's job. "Jack is a smart salesman. He talked to the wife," says Rachel Koll, who essentially accepted on her husband's behalf. Just a week earlier, they'd been rooting around the floor of their Ford Escort, looking for loose change so they could buy lunch. It was an easy decision.

"Are we any good?" Koll asked Spates.

Cornell has a fine wrestling tradition; it won Ivy League titles under previous head coach (and current athletic director) Andy Noel, but it hadn't won an Eastern championship in more than four decades. By 1993, the year Spates left for the University of Oklahoma, the Big Red was first in the East and tenth in the nation.

When Koll took over the reins, he admits, he made "an amazing number of mistakes." He tried to attract wrestlers who had little chance of earning acceptance to the University instead of focusing on battles that could be won. He didn't yet understand how to turn Cornell's academic diversity into a recruiting advantage. "I was stubborn and proud," he recalls. He also needed to stop thinking of Ithaca as a stop on the way to somewhere else. "I became a much more effective coach," he says, "when I stopped trying to look for a great job and started trying to make Cornell a great job."

In the process, he has turned the program into a national model. Imagine if the men's basketball team, as good as it was in recent years, could consistently outplay Duke and Kansas; that's what Koll has achieved. Heading into March, Cornell had produced twenty-four All-Americans in the previous six years (compared with just eleven in the four decades before Koll arrived). The team has finished among the nation's top dozen teams every year since 2003, and Koll is now Cornell's all-time winningest wrestling coach, with more than 200 dual-meet victories. Two decades later, how does he feel about his record? 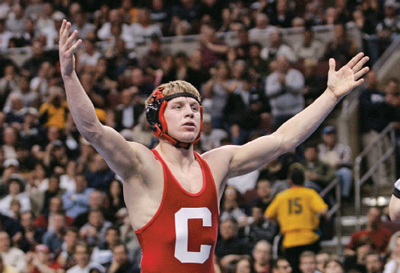 Championships often start out with some major upsets. Not so today; seven of nine Big Red wrestlers have won their first-round matches. In the standings following the first of what will be six mid-day and evening sessions, Cornell is in third place, behind Iowa and Penn State.

After a University of Buffalo wrestler sings a stirring rendition of the national anthem, a Red grappler out-points a white-and-blue-adorned opponent from Millersville University. For Corey Manson '10, a fifth-year senior from Lookout Mountain, Tennessee, the consolation-bracket triumph is his first national-level win in his final tournament. In the race for the team title, every point counts.

It has been a very good half-hour for Cornell fans watching the action on mat number five. First, 174-pounder Mack Lewnes '11, last year's NCAA runner-up, pins his opponent from Ohio University. Then 184-pounder Steve Bosak '12 repeats the feat against an Arizona State wrestler and waves his arms to turn up the crowd's volume. Minutes later, Cam Simaz '12, the top-seeded 197-pounder and the unanimous Ivy League Wrestler of the Year, wins a decision against a Nebraska opponent. At the end of the day, Penn State leads the team standings with 30.5 points. Cornell is second, 1.5 points behind.