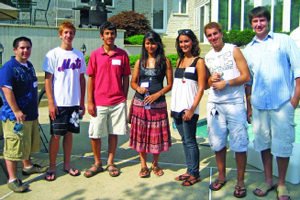 While the increase in Cornell's application rate—13 percent over the past two years—has been great news for the University, it has tested the mettle of the Cornell Alumni Admissions Ambassadors Network. CAAAN is one of the University's largest alumni groups, with more than 7,000 members. Its volunteers meet with applicants to answer questions about Cornell, providing a personal touch during the admissions process; they also file reports with the Undergraduate Admissions Office, providing feedback about their meetings with the candidates. In addition, CAAAN members staff college fairs, participate in special events, and host admitted student receptions and freshman send-offs.

Volunteers are assigned to one of nearly 400 committees worldwide, each overseen by a chairperson. (In larger metropolitan and suburban areas, the committees are also overseen by a general chairperson.) Randy Rosenberg '74 serves as general chair of Nassau County CAAAN on Long Island and oversees one of the county's fourteen committees. With the growing application rate, he knew he had to come up with some creative strategies. Rosenberg began working with a local high school, taking over its guidance suite for a weekend and asking alumni to donate four hours of their time. He then called each applicant individually to schedule meetings. "On one Saturday alone, we were able to see seventy-five applicants," he says. 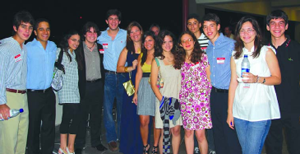 For the past nine years, Seth Kaplan '92 has served as general chair for the Greater Dallas Metroplex, an area that includes not only Dallas but most of eastern Texas as well. As Cornell has expanded its admissions marketing to large population-growth areas, especially the Southwest, Kaplan has also seen applications rise while the number of volunteers remains steady. "It's meant asking alumni to give a little more time, seeing an additional applicant or two," he says. "I've never had an alumnus not willing to pitch in."

Despite his volunteers' enthusiasm, Kaplan faced a particular challenge at one high school. The Texas Academy of Math and Science is a boarding school fifty miles north of Dallas that draws students from all over the state. However, because there are no CAAAN members in the vicinity, Kaplan's group had been unable to effectively reach out to the academy, which is rich in prospective Cornellians. To solve this problem, he arranged with school administrators to coordinate student-volunteer meetings on a Saturday. Next, he asked his committees to see if alumni were willing to drive up and spend the day talking one-on-one with applicants. He was surprised at the number who volunteered. "Not only did we get to meet with all the applicants," Kaplan says, "but we made a very positive impression for Cornell."

For Claudia Meer '73—who has seen the number of applicants grow from 300 to 500 in the past ten years in the two committees she oversees in suburban Bergen County, New Jersey— communication with her 100 volunteers has been key to success. "You have to be in constant contact and maintain their enthusiasm for Cornell," she says. To do this, Meer sends out regular e-mail updates about what's happening on campus and recruits new members by finding alumni in the area whose children have recently been accepted to the University.

While some CAAAN committees oversee all or part of a city, county, or state—or even an entire country—a handful are assigned to just one high school. Jennifer Chung '98 co-chairs one of these; it meets with applicants from Stuyvesant, perhaps New York City's top public high school. Chung has seen the number of applicants from Stuyvesant, of which she is an alumna, grow from 150 to almost 300 over the past seven years. And every year, nearly everyone has had a CAAAN contact. "The only way we can get this done is through group meetings," says Chung, who conducts sessions early in the morning on her way into work with the help of the school's guidance office. Chung warns there's a lot of work that goes into making these meetings effective, so each applicant gets individual attention. "I'll send each one a questionnaire beforehand, so I know a little about them," she says. "But more important, I'll ask them to send me their questions about Cornell so I can research the answers." 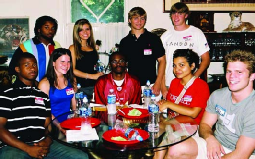 Chung says these group sessions have had an unexpected effect: drawing out students who don't understand the admissions process. "Many are first-generation Americans, and they don't understand what's required," she says. "They see their classmates answering questions and talking about themselves, and it tends to make them feel more comfortable." Because many Stuyvesant students commute two or more hours each way to get to school, Chung asks each one of them, "If I could give you back those extra hours, what would you do with them?" She says the answers reveal things—like a desire to do certain extracurricular activities or help their parents with the family business—that they would never think to include in their Cornell application. "The question allows the admissions office to understand these students more and puts the personal touch in the reports we file," she says, "which is what the whole CAAAN process is about."

Scott Pesner '87 serves on the Cornell Alumni Federation Board.

If you would like to volunteer for CAAAN, go to caaan.admissions.cornell.edu . 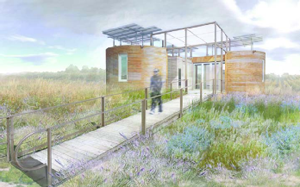 The Cornell University Solar Decathlon (CUSD) team is making great progress as it builds a boldly designed solar-powered house for the U.S. Department of Energy's Solar Decathlon competition, which will be held in Washington, D.C., in mid-October. In August, CUSD showcased the house at the Great New York State Fair in Syracuse. With more than 150 student members, this is Cornell's largest student-run project.

For the final competition, twenty colleges and universities from around the world will meet on the Washington Mall, where each will build and showcase a highly energy-efficient, entirely solar-powered house. Entries will be judged on ten criteria, including engineering, market viability, and lighting design. For more information on the event and related activities planned for all Cornellians, e-mail cusd@cornell. edu or visit cusd.cornell.edu.

Join fellow Cornellians and friends and enjoy the best that the University has to offer. The campus will be in full swing with programs that promise to keep you busy from morning to night. You can choose from campus tours, college and school programs, fraternity and sorority events, admissions information sessions, recreational programs, tailgates, other class and affinity activities, and much more. For more Homecoming information, visit alumni.cornell.edu/ homecoming or call the Office of Alumni Affairs at (607) 255-1988.

Feel the excitement in the air! Join the roar of the crowd and cheer the Big Red on to victory against the Fordham Rams. For football tickets and stadium parking permits, call the Athletic Ticket Office at (607) 254-BEAR.

Sing along to your favorite Cornell songs and enjoy a variety of choral pieces by one of the country's premier male collegiate vocal ensembles. For details, visit www.gleeclub.com .

Overnight accommodations in the Ithaca area are limited; call the Tompkins County Convention and Visitors Bureau at (800) 284-8422 or go to visitithaca.com for an update on availability.