The full-page ad in Variety a few years ago showed a pair of comedy icons surrounded by some serious vices. Trey Parker and Matt Stone—creators of "South Park," the wildly successful animated series on Comedy Central that embraces taboos and skewers everything sacred—had paid for the ad themselves. "To Kevin," it said. "Without you, who knows where we'd be . . ." Beneath those words a photograph showed the pair smoking joints and sitting at a coffee table littered with cocaine, cash, and a handgun. "Thanks for being our friend and lawyer," it added.

If it was typical of Parker and Stone— irreverent but never irrelevant—it was also heartfelt. Their "friend and lawyer," entertainment attorney Kevin Morris '85, had struck the original deal for the creation of "South Park" more than a decade earlier. Just a few months after the ad appeared, Morris would negotiate an agreement between his buddies and Comedy Central that would shake up the entertainment industry by redefining the rules. The contract for a three-year extension of the show included a precedent-setting 50-50 split of ad revenues and creation of South Park Digital Studios, a hub to spread the show's material online, across mobile platforms, and in video games. "Traditionally, show creators and actors get a piece of the action, but in television that piece has always excluded advertising revenue," says Morris, who was listed among the Hollywood Reporter's "100 most influential attorneys in entertainment" in July. "They have to look to money that the show makes from license fees, international distribution, and ultimately—if it's successful—from syndication." 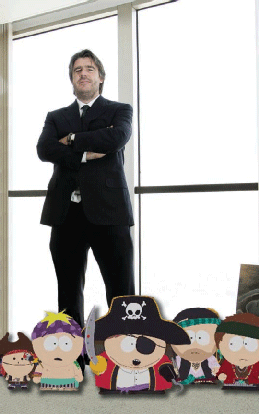 However, an earlier "South Park" deal forged by Morris had assured that any money derived from the show beyond Comedy Central would go into Parker and Stone's profit-sharing pie. When the Internet evolved and it became clear that much of the revenue would come from advertising during online video streaming, Comedy Central was more inclined to cut in the creators. The New York Times called it "a landmark deal that set Hollywood buzzing." Pretty impressive, considering that Morris began with a couple of animators peddling a cartoon fight between Jesus and Santa Claus.

Morris grew up outside Philadelphia, the son of a refinery worker and a school secretary; he worked his way through Cornell as a bartender at Johnny's Big Red Grill. He majored in government on the Hill, where he played two years of JV basketball and served as president of Sigma Pi fraternity. (His freshman adviser was Professor Glenn Altschuler, PhD '76, with whom he now co-writes occasional op-ed pieces and a blog in the Huffington Post, reviewing books on media and politics.)

After earning his law degree from NYU, Morris made his way to L.A., where he started his career by handling the contracts of independent filmmakers. He met Stone and Parker at a party during the 1994 Sundance Film Festival and represented them for a few years during which, as Stone told the New York Times, "he didn't make a dollar off us." Contrast that with the estimated value of the recent deal with Comedy Central—about $75 million—and one understands the source of their cheeky-but-sincere gratitude.

Loyalty, not always a priority in Hollywood, is evident in another of Morris's A-list clients, the actor Matthew McConaughey. When the two met in the mid-Nineties, McConaughey was a little-known supporting player, while Morris was (as McConaughey told the Times), "sitting in a cubicle with long hair and a rumpled suit wishing he could have an assistant one day." In 1995, McConaughey auditioned for the adaptation of John Grisham's A Time to Kill—and landed the lead role. Morris's firm was born at about the same time, and for several years he and his growing list of partners leased office space in a Santa Monica building that also housed a yoga studio.

Morris began with a couple of animators peddling a cartoon fight between Jesus and Santa.Today, the firm boasts twenty lawyers and shares an office tower with Creative Artists Agency in Century City. "We've moved into the belly of the beast," jokes Morris, who is married to another Hollywood powerbroker, Gaby Morgerman, head of talent at the William Morris Agency. But he notes that he has a smaller client base than most entertainment lawyers. "I have a close bond with my clients," says Morris. "I'm drawn to people who have singular personalities, and I tend to get people who are more anti-system." Indeed, Morris's clients include other paragons of irreverence like Mike Judge ("Beavis & Butt-Head" and "King of the Hill") and E! talk show host Chelsea Handler; his partners' clients include comedians Ellen DeGeneres and Chris Rock.

The recent "South Park" deal represents the direction in which Morris vows to take his agency—focusing on growth opportunities in digital space. His firm helped set up FunnyorDie.com, a popular website co-created by comedian Will Ferrell; in 2007, Morris launched an organization to bring together artists, media executives, and technology experts for brainstorming sessions. "Everybody's trying to figure out the future," he says. "I'm particularly concerned with the role of artists in the evolution of entertainment, what our place is—and getting our fair share."