CherryPharm aims to be the next generation of sports drink

Sarah Valois loves to tell the success stories—like the man who used to come into her office with a cane but doesn't need one anymore, or the eighty-year-old woman who can play eighteen holes of golf on Tuesday, tennis on Wednesday, and more golf on Thursday. The secret to their robust health, says Valois, is CherryPharm, a "nutraceutical" beverage produced at the Cornell Agriculture and Technology Park in Geneva that claims to unlock the healing properties of tart cherries. Valois, who earned a PhD in food science on the Hill in 2007, is CherryPharm's director of product development. 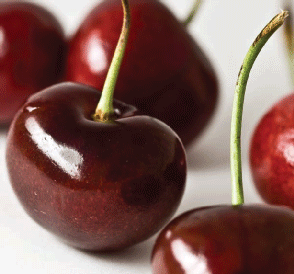 While Valois's stories may sound too good to be true, fans of the maroon-colored, slightly bitter drink say it makes them feel stronger and healthier and reduces recovery time after exercise or injury. Among them are members of some of the sports teams that have been receiving CherryPharm as a free training aid: the NHL's New York Rangers, England's Tottenham Hotspur soccer squad, and more than twenty Division I collegiate athletics programs, including the Cornell men's and women's hockey teams. "I have found CherryPharm is the best recovery drink on the market," says Trinity College women's tennis and squash coach Wendy Bartlett in a testimonial on the company's website. "I drink it every day and have been amazed at the difference in my fitness level."

The company backs up this anecdotal evidence with research conducted by Cornell food scientist Olga Padilla-Zakour, PhD '91, and the University of Vermont's Human Performance Lab. One study, published in the British Journal of Sports Medicine in 2006, showed that athletes lost less strength after working out if they drank tart cherry juice. Valois says more research is forthcoming. "We're trying to prove that if you drink CherryPharm every day it reduces inflammation, which is a culprit behind most degenerative  diseases," she says.

Ben Scrivens '10 is the starting goalie for the Cornell men's hockey team, which has been receiving free CherryPharm after practices since last season. He says that although he appreciates that the drink is all natural, he's not so sure about its health benefits. "You can definitely tell from the taste that it's real," he says. "I'm not a big fan of dumping half a pound of powder into your water and trying to choke it down." In a humorous piece in the Daily Sun in November 2007, food columnist Charlie Niesenbaum '08 praised the drink's flavor—though he noted that swigging an entire bottle in one gulp caused him some gastrointestinal distress, possibly because of interaction between its antioxidants and his steady diet of junk food. "It tastes like eating a whole can of cherry pie filling," he wrote. "But without the risk of immediately getting diabetes."

CherryPharm is sold through the company's website, and as of spring 2008 it has been available in all seventy-two Weg-mans supermarkets. (It isn't cheap: an eight-pack of eight-ounce bottles of CherryPharm Natural Health, each of which contains the juice of about fifty cherries, costs $15.99.) From the technology park—a seventy-acre campus that opened in 2005—the company makes and ships three varieties: the original Natural Health, Natural Recovery (with protein and other added nutrients), and Natural Fruit (a blend with apple and grape juices). CherryPharm occupies a surprisingly small space on a hallway where its neighbors include two gourmet cookie-makers and a company devoted to high-end hay production. There's just one lab (which doubles as Valois's office and the employee break room), a production facility with juice-making and bottling machines, and a storage room down the hall. Part of what makes the small quarters feasible is that the company doesn't need much storage space: the juice has a three-month shelf-life. Says Valois: "We want it to be like you're eating a cherry straight out of your backyard."