Around New Year's, in the wake of Congress's two-year extension of the tax cuts passed a decade ago under President George W. Bush, law professor Robert Hockett and two Yale faculty made a splash in the national media with a radical idea. Combining fundraising with political protest, they launched a web-site—GiveItBackForJobs.org—that allows people to calculate their tax savings and donate the money to charities such as Goodwill and Habitat for Humanity. A professor of business law, Hockett focuses his scholarly work on economic justice—and, he says, "tax policy is one of the principal means through which a government acts upon the prevailing view of just economic relations." He spoke to CAM in January from Paris, where he was giving a three-week lecture series at the Sorbonne. As of mid-February, the site had raised more than $2 million.

Cornell Alumni Magazine: Your website has drawn a great deal of media coverage, including stories in the Wall Street Journal, New York Times, Huffington Post, ABC News, and MSNBC. Why so much interest? 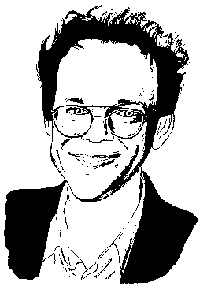 Robert Hockett: I have to confess it has turned out to be rather bigger than I expected. It seems to have struck a nerve. That makes us hopeful that it might generate a more thoughtful, reflective, careful national debate on what taxes are for, what tax policy is for, and what ought to be done with tax revenues. The recent Great Recession is still on the public's mind. I suppose that it's still "the economy, stupid."

CAM: When you appeared on "Fox & Friends," you and the host got into a semantic argument about whether the tax bill passed in December constituted a cut or the prevention of an increase. Do you get that a lot?

RH: This is a well-known tactic employed by some on the right and by Fox in particular; they try to come up with a new way of framing a policy to make it look like something that it isn't. So they say, "This isn't a cut, it's simply avoiding an increase." And what they're doing is capitalizing on the fact that people tend to be more suspicious of tax increases than of refraining from cuts. In other words, the status quo enjoys a bias—which is a well-known tendency of human psychology—and the Fox people exploit this.

CAM: So which is correct?

RH: To characterize this recent extension of the Bush-era tax cuts as mere refraining from increases is flatly dishonest. You can only understand a tax by reference to the law that provides for or levies it—and the law that levies these taxes provided that they were going to drop to a certain amount for ten years, then go back to what they were before. By extending them, you've converted what had been a ten-year cut to a twelve-year cut. And if you quantify that, you see at once that you're making those cuts larger—at least 20 percent larger. There is no way around that fact.

CAM: Why, in your opinion, were the Bush-era tax cuts unwise?

RH: The tax cuts of 2001 and 2003 disproportionately benefited the very, very, very wealthy—those who least needed the benefits. To us that seems strange. It seems to us that the way tax policy ought to work is that those who earn more, contribute more.

CAM: What about the idea that cutting taxes stimulates the economy?

RH: It's very well known—both theoretically well understood and empirically well verified—that tax cuts for ultra-wealthy people are not stimulative in the way that tax cuts for middle-class Americans or those at the lower end of the economic ladder are. Less wealthy people tend to spend tax cuts on consumption goods and services, and that generates employment. But when you cut taxes for people who already have ten yachts, they don't buy an eleventh. That money tends to be spent on speculative financial assets—that is to say, it goes toward fueling bubbles in markets like that for subprime mortgage-backed securities.

CAM: When you talk about the "ultra-wealthy," what do you mean?

RH: Our working definition is people who earn more than a million dollars a year—the highest-earning 1 percent of Americans, maybe less.

CAM: This website is a sequel to one you launched after Hurricane Katrina. How did you and the co-founder of that site make the connection between a natural disaster and federal tax policy?

RH: When Katrina struck, we were struck by the fact that the damage was partly attributable to eroded infrastructure— which in turn was partly attributable to the fact that tax revenues were down owing to the cuts of 2001 and 2003. We had thought those cuts wrongheaded in the first place, so we created a website where people could calculate what they had saved and donate those savings to charities engaged in hurricane relief necessitated in part by the tax cuts themselves. The idea was to get money to people who needed it—the site raised more than $250,000—but also to tie that aid to a particular meaning, in this case a protest of wrong-headed fiscal policy, and ultimately to generate a more intelligent national discussion about tax policy.

CAM: What prompted you to launch the new site?

RH: The tax cut extensions, combined with the backdrop of the Great Recession. Katrina caused damage to a relatively small region; the earlier site was accordingly smaller scale in the message it conveyed and the aid that it generated. This new site responds to a disaster that has struck the whole economy, and is accordingly larger scale both in the message it's meant to convey and the donations it is generating.

CAM: How did you choose the charities?

RH: They're organizations devoted to job retraining and relocation; to helping people stay in their homes or to aiding the homeless; and to helping people obtain health care in times of economic distress. We chose those categories because they're appreciably linked to recessionary times.

CAM: You've said that you want the site to form a "shadow tax policy." What do you mean by that?

RH: It's an attempt, at least partly, to replicate privately what would have been done publicly under the right tax policy. The donors are directing their funds toward certain helpful ends, but under protest— they're saying that this would have been better done through ordinary taxation channels. It's definitely a "first best" to have good tax policy; having something like this website is a second best.

CAM: Is the site meant as some sort of protest against the rich?

RH: It would be a big mistake for people to interpret us as being hostile toward the wealthy. We who created the site are beneficiaries of these tax cuts, and we consider ourselves pretty well-to-do, but we didn't want the tax cuts for ourselves. Many people of means—for example, Warren Buffet and Bill Gates—continue to oppose them. But when they make charitable donations, they have to worry that their giving might be, in effect, co-opted by those who favor the cuts.

CAM: How is that?

RH: People who favor tax cuts for the wealthy say they're a good thing because the rich will then donate to charity. So charitable donors have to worry that people are going to point to them and say, "We told you so"—that they can attach a message that the givers didn't intend. Our site lets donors re-establish control over the meaning of their own giving.

CAM: What kind of reception has the site gotten?

RH: There has been a lot of positive feedback. Donations have gone into the millions and we've gotten many laudatory messages.

RH: There's been surprisingly little— beyond a couple of e-mails saying, "Leave it to egg-headed professors to come up with the goofiest idea of the year."