A farmer toes the dirt uncomfortably, pausing in front of a row of soybeans. His fields, located about twenty miles outside Ithaca in rural Freeville, have been plagued by a resistant weed called mare's mane. Today, he has called in an agricultural consultant for help. "It's embarrassing," he tells her. "All the other farmers talk about it behind my back. I can't even show my face down at the local café." 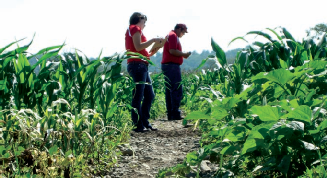 After inspecting the plot, the consultant can't determine the cause of the problem— so it's just as well that the entire scenario is fictional. It's all part of a role-playing event at the annual Northeastern Weed Science Society Competition, held in July at Cornell's vegetable research farm. The farmer is entomology professor Elson Shields, while the consultant is an undergraduate from Ontario's University of Guelph. "It's easy to read a book and then take a test," says Jessica Drennan '90, a horticulture technician at the research facility who also portrayed a farmer for the event. "But being out here in the field, you have to take your knowledge to the next level."

Drawing about a hundred competitors from as far away as Florida and Illinois, this "world series of weeds" consists of four main events: weed identification, herbicide identification, herbicide sprayer calibration, and grower problems. Plots of crops and weeds are planted weeks in advance, and many of the competition's organizers are experts in their field. The student teams study and practice for months, but the focus is on education and collegiality. "I'd rather learn something today than win something today," says Max Hendrickson, an undergrad from the University of Illinois. Ohio State University grad student Jason Parrish has won the competition three times; he now competes in an Ohio State head-band and fingerless black gloves decorated with brightly colored sequins and glitter. The outfit, he says, is "a reminder that the competitors shouldn't take themselves too seriously."

As the weed control industry has changed over the last decade, so has the competition. Once dominated by issues pertaining to conventional agriculture, the events now include problems facing organic farmers and the managers of natural areas. Jules Ginenthal, a gardener from Cornell Plantations, plays a manager facing an invasive Japanese knotweed. "My problem kind of throws the students from an agricultural background for a loop," he says. "They're used to putting a dollar sign on their recommendations, but you can't put a price on a pristine natural area."

And what of the undergrad faced with mare's mane in the soybean field? She fell short of identifying the problem's underlying cause: that airborne seeds had been carried hundred of miles by thermal mixing and wind currents. (However, she got high marks for her methodology, and her team eventually won the undergrad division.) Shields points out that the phenomenon—one that he helped elucidate by tracking the long-range movement of airborne particles with model airplanes—was a relatively recent discovery in weed science. "That's one of the reasons we're here," he says, "to expose students to new ideas."