Dan Farrugia may have had the sweetest internship in Cornell history

Dan Farrugia may have had the sweetest internship in Cornell history

Imagine you're finishing up your junior year on the Hill and pondering how to spend your summer. You aspire to a career in sports law, but don't want to be office-bound in July and August. Then you come across a help-wanted ad that reads something like this: Participate in the creation of a unique position. Earn national media coverage. Learn new skills. Travel the world. Meet well-connected people. Pays five figures. How's that for an internship?

Dan Farrugia '10 didn't have to apply for the job; he invented it. In the spring of 2009, the ILR major sent his good friend Sam Querrey—who happens to be one of the best professional tennis players in the world—a proposition via e-mail. Querrey loved the idea, calling it "a no-brainer," and an internship was born.

From July through September, Farrugia accompanied Querrey to various stops on the Association of Tennis Professionals (ATP) World Tour—from California to Connecticut to Bangkok. That was not particularly remarkable; top players have been known to travel with support staff. But Farrugia's role was unique in that he was a jack-of-all-trades in the world of aces, a sort of one-man entourage combining roles typically handled by coaches, agents, or the athletes themselves. He strung and gripped racquets, handled ticket requests, made lodging and flight reservations, and served as a sort of press secretary for his pal. "Since Dan wants to become involved in sports management, this was a great opportunity for him to get some perspective of what that is like," says the twenty-two-year-old Querrey, who currently ranks fourth among American tennis players on the ATP Tour. "He was constantly around athletes, their agents, and their lawyers." 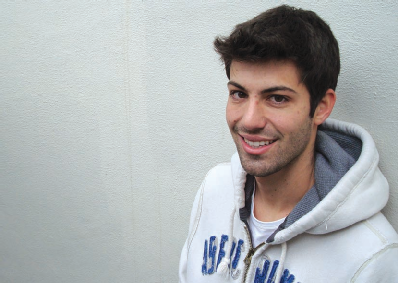 The media soon took notice of Querrey's full-service tennis concierge (there were mentions on ESPN and in Sports Illustrated), and his fellow American pros were so struck by Farrugia's ubiquity that they playfully began to refer to him as "Dan the Intern." Call it a backhanded compliment. "I was with him all the time—at home and on the road," says Farrugia. "It's sort of like I was always on the clock, but half the time I was there as a buddy."

The two have been close since the sixth grade, having grown up together in Thousand Oaks, California. While Farrugia enrolled at Cornell, Querrey turned down a scholarship offer from the University of Southern California, opting to turn pro. Over the past few years, Farrugia watched his friend earn more than $1 million in prize money and work his way up the rankings. Often, he watched him in person; Farrugia was among a group of high school pals who founded the "Samurai Club," a headband-wearing, chest-painting, drum-banging cheer squad that has earned a measure of fame (or infamy) by introducing a Happy Gilmore flavor to the traditionally staid world of tennis fandom. "There have been instances when people have taken exception to us, but we try to stay respectful," says Farrugia. "We're tennis fans first, even though we're rooting for Sam." 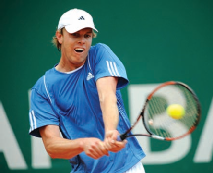 Last spring, when the two decided to craft a more professional relationship, Farrugia said he didn't need compensation. But Querrey insisted on giving him 3 percent of his winnings, on top of travel expenses. "Professional tennis players are on the road over half the year, so it can get lonely," says Querrey. "The biggest benefit of having Dan around was his company. We went to sporting events, concerts, and dinners, and sometimes he even joined in during my workouts."

The arrangement also paid off professionally—on both sides. Farrugia developed relationships with agents, ATP tour executives, and representatives of sponsoring companies such as Olympus America. Meanwhile, Querrey thrived on the court, perhaps because he didn't have to sweat the small stuff. "As a player, I want to spend as much of my energy as possible worrying about tennis, working out, studying opponents, and preparing for matches," he says. "I could focus on tennis, while Dan took care of everything else."

After Farrugia joined him, Querrey promptly won a tournament in Los Angeles. Then he reached the finals in Indianapolis and Newport, Rhode Island, defeated former U.S. Open champ Andy Roddick in Cincinnati, and earned enough points to win the summer Olympus U.S. Open Series, meaning his prize money at the U.S. Open (where he lost in the third round) was doubled. By late September at the Thailand Open (Farrugia took the fall semester off), Querrey was ranked number twenty-five in the world, and Farrugia had earned nearly $10,000.

Alas, the lucrative Sam-and-Dan Tour ended with a freak injury in Bangkok. Querrey fell through a glass table while sitting to tie his shoes, cutting his right forearm severely, and missed the rest of the season. He returned for the Australian Open in January—but by the time he was Down Under, Farrugia was back on the Hill, completing law school applications, though perhaps having made his mark on the world of tennis. "There is definitely a chance of me hiring another intern," says Querrey. "But Dan has set the bar pretty high."