For a Cornell sports fan, trying to pick the high point of the 2009-10 winter season is a lot like being a parent trying to pick his favorite quadruplet. On the surface the choices appear to be similar, but in reality they're all special in their own way.

How do you compare the men's basketball team—which got national press while becoming the first Ivy League squad to reach the Sweet Sixteen in 31 years— with the rags-to-riches story of a women's hockey team that lost the national championship game in double overtime after going 11 years without a winning season? How do you choose between the wrestling team, which bested every other squad but one, with a men's hockey team that won its 12th ECAC title? Fortunately, it's not necessary to choose one over the other. At least until next year, Big Red fans can bask in the golden memories of a historic winter season.

The largest headlines were garnered by the men's basketball team. They became one of the darlings of March Madness, picking up fans across the country who love to root for the underdog. After topping Temple in the first round, the Big Red soundly defeated Wisconsin, 87-69, becoming the first Ivy team since Penn in 1979 to reach the regional semi-finals. It was their 29th victory of the season, an Ivy League record. Basking in the national attention, the Big Red had only a short bus ride to Syracuse, where they faced perennial power Kentucky in front of a friendly Carrier Dome crowd. The strong fan support helped Cornell jump out to an early 10-2 lead, but Kentucky eventually prevailed, 62-45. 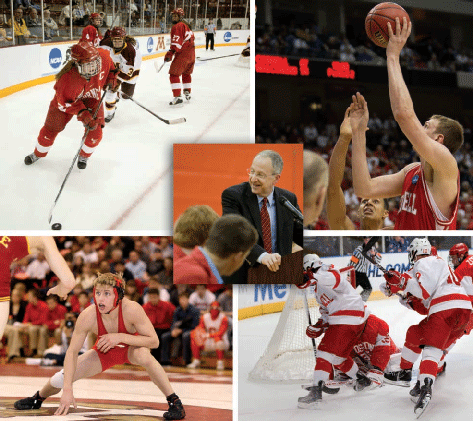 The game marked the culmination of an unprecedented run by the Class of 2010, which earned three straight Ivy titles while going 28-4 in league play. Ryan Wittman '10 became only the third Cornell player to earn honorable mention All-American honors after averaging 17.5 points per game and being named Ivy League Player of the Year. He departs as Cornell's all-time leading scorer with 2,028 points, only the fifth Ivy player ever to eclipse the 2,000-point mark.

Louis Dale '10, an honorable mention All-American selection in 2008, was named the 2010 Mid-Major MVP after averaging 21.3 points per game in the NCAA tournament and committing only one turnover in three games. Jeff Foote '10 joined Wittman and Dale as a first-team All-Ivy selection and was named the league's Defensive Player of the Year for the second straight season. And head coach Steve Donahue earned the Clair Bee Award, given annually to a Division I men's basketball coach who makes an outstanding contribution to the sport. Unfortunately, Donahue's achievements drew the attention of many big-time basketball programs, and he was named the new head coach at Boston College in April.

While men's basketball built on previous success, the women's hockey team came out of nowhere to take a place on the national stage. With only two winning seasons in the previous 18 years and its best player taking a year off to play in the Olympics, it's not surprising that the Big Red was picked to finish seventh in the 12-team ECAC Hockey League. But Cornell surprised everyone by capturing the regular season title with a 14-2-6 mark before reeling off four straight victories to win the league tournament. Their reward was a trip to Harvard for the first NCAA tournament game in program history. A 6-2 win over the Crimson sent them on to the Frozen Four against top-ranked Mercy-hurst, who had handed the Big Red a pair of defeats in a season-opening series at Lynah Rink. But the Big Red made believers out of the doubters again, recording a 3-2 win when Catherine White '12 scored 13 minutes into overtime.

The national title game against Minnesota-Duluth became an epic, with a short-handed Cornell team (only 15 skaters dressed) battling the Bulldogs for 119 minutes over four-and-a-half hours. But even UMD's winning goal with 33 seconds left in the third overtime couldn't cast a shadow over the Big Red's season. Laura Fortino '13 became the first Cornell player to earn first-team All-American honors and was the nation's leading scorer among freshman defenders. Her defensive partner, Lauriane Rougeau '13, was a second-team All-American pick along with White, who was also named the ECAC Player of the Year. Also honored was head coach Doug Derraugh '91, chosen as the Division I Coach of the Year in his fifth season behind the Big Red bench.

"We were able to watch the men's basketball team on television before we left for our first game at the Frozen Four, and I remember how excited the players were about that," said Derraugh. "It gave us a big boost of energy. We were considered an underdog in our tournament, and to see the men's basketball team do so well on the big stage sort of set us up for what we were about to encounter."

There was less drama at the wrestling championships, where the Big Red claimed national runner-up status, the best finish in the program's history. Iowa wrapped up its 23rd title before the finals even began, and Cornell secured second place by 25 points over Iowa State. Four Big Red wrestlers earned All-American honors, led by Kyle Dake '13, who won the national title at 141 pounds. Mack Lewnes '11 became a two-time All-American by finishing second at 174 pounds, and Cam Simaz '12 did the same with a third-place spot at 197 pounds. Troy Nickerson '09 rounded out the honors, becoming Cornell's third four-time All-American when he finished fourth at 125 pounds.

With all the hoopla surrounding the other winter sports, it may have been easy to overlook the men's hockey team—but they continued their tradition of excellence by winning a record 12th ECAC Hockey title and making their 18th appearance in the NCAA tournament. The Big Red finished second in the regular-season ECAC standings, one point behind Yale, to earn a post-season match-up with Harvard. They swept the Crimson at Lynah for the first four-win season in the rivalry's history before shutting out Brown and then Union by 3-0 scores to take the ECAC tournament title in Albany.

Those two games were part of a school-record 267-minute shutout streak by goalie Ben Scrivens '10, the third longest in NCAA history. Scrivens, named the winner of the Ken Dryden '69 Award as the league's top goalie, also set Cornell career records with 19 shutouts and 2,873 saves. Justin Krueger '10 was named the league's Defenseman of the Year, and team captain Colin Greening '10 earned Scholar-Athlete of the Year honors.

The men's hockey team ended their season with a loss to New Hampshire in the NCAA tournament, but that did not dim the luster of another strong effort in what was truly a dream season for Cornell. Athletic director Andy Noel must be hoping he'll never wake up.

FLYING HIGH The gymnastics team put together its best performance of the year to the win the Ivy Classic for the third straight season, posting the top team score in all four events. Emily Santoro '11 and Kerri Lavallee '11 tied for first in the vault, and Bethany Neczypor '12 earned a share of the bars title.

OLYMPIANS Cornell was well represented at the 21st Winter Olympics in Vancouver. Rebecca Johnston '11 played in all five games as the Canadian women's hockey team went undefeated to win its third straight gold medal. Johnston had a goal and five assists. Doug Murray '03 was a defenseman for the Swedish hockey team that went 3-0 in the preliminary round before losing to Slovakia in the quarterfinals. And former Cornell football player Jamie Moriarty '03 was a member of the USA3 four-man bobsled team that finished 13th.

AT THE WIRE Back at full health after battling injuries for a year, Morgan Uceny '07 claimed her first national title, winning the 1,500 meters at the USA Indoor Track and Field Championships in Albuquerque, New Mexico, on February 28. Competing for the Reebok Running Club, Uceny finished in 4:19.46, edging out Shannon Rowbury, the bronze medalist at the 2009 World Outdoor Championships, by two-hundredths of a second.

TOP TEN No school has won more ECAC men's hockey titles than Cornell, and no team placed more players on the ECAC All-Decade squad. Leading the way was Doug Murray '03, who was selected for the first team. He was a two-time All-American and a Hobey Baker finalist. Matt Moulson '06 and David LeNeveu '05 were chosen for the second team. Moulson led the Big Red in scoring for three straight years, while LeNeveu was a first-team All-American in 2003 after backstopping the Big Red to a Frozen Four appearance with a league-record career goals-against average of 1.29.

ON CALL Nearly seven years after his last professional appearance, Parris Duffus '94, BS '02, returned to the ice this season in an International Hockey League game. Duffus played the final 31 seconds in goal as the Fort Wayne Komets lost to Port Huron 2-0. Duffus, a Fort Wayne firefighter, served as the Komets emergency goalie throughout the season.

SLAM DUNK Former Cornell basketball center Andrew Naeve '07 will face a different kind of press this year as he runs for a spot in the Iowa state senate. A sixth-generation farmer in Clinton, Iowa, Naeve is vying for a seat opened up by the retirement of the incumbent. A Republican, he is a member of East Central Community School Board and head coach of the East Central High School boys' basketball team.