The 440,000 or so annual visitors to Monticello, Thomas Jefferson’s stately home on a Virginia mountaintop, get a glimpse into the Founding Father in all his complexity and contradiction. They’re escorted through the house he designed, complete with ingenious touches like a wine dumbwaiter hidden in the dining room fireplace. They can go on a tour about the lives of Jefferson’s slaves and — as have so many Americans — grapple to comprehend how the author of the Declaration of Independence could own other human beings. 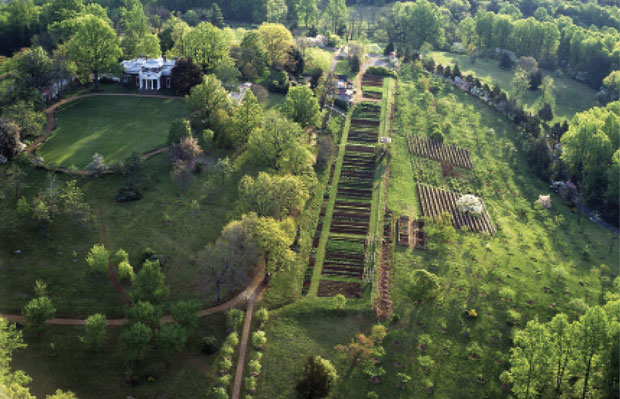 And they can walk in his vegetable garden. The 1,000-foot-long, two-acre plot was one of Jefferson’s abiding passions — a focus not only of his gastronomic delights but of his scientific acumen. “No occupation is so delightful to me as the culture of the earth,” he wrote in an 1811 letter to portraitist Charles Willson Peale, “& no culture comparable to that of the garden.”

As Jefferson once wrote, “No occupation is so delightful to me as the culture of the earth.’

Two centuries later, maintaining Jefferson’s beloved patch is the job of Pat Sande Brodowski ’76. The CALS alum runs the kitchen garden at Monticello, where she and her staff grow some 250 kinds of plants — herbs, vegetables, and fruits. The proceeds are consumed in the visitor center cafe, used to educate field-tripping schoolchildren, sampled in twice-weekly tasting tours, and sold as seed online and in the gift shop. “Jefferson tried to grow everything he could find, and that really appeals to me, because I like to grow everything in the vegetable world,” says Brodowski, who came to the post six years ago from a farm museum in Maryland. “He was so flexible in his mind — not saying no to anything and just seeing what grows. People in Virginia in his day were used to Northern European plants that like lots of rain and cool summers, but we’re on the same latitude as northern Italy, so the summers are hot and dry. He was smart enough to get seeds that the slaves were growing — okra, eggplant, sesame, all kinds of melons, pumpkin, castor bean, peppers. He was really smart about growing things from a hot climate that many other people weren’t interested in.”

Located just steps from the main house, the garden is laid out more or less according to Jefferson’s design, in two dozen neat beds containing rotating crops of asparagus, artichokes, lettuce, squash, corn, and much more. Lidded pots conceal sea kale, which becomes sweet and tender when grown in the dark; Jefferson liked it so much, Brodowski notes, he cultivated 500 plants one year and 600 the next. Jefferson saw the garden as pleasurable as well as practical: one arbor is laden with Caracalla bean, an ornamental variety with richly scented purple-and-white flowers he called “the most beautiful bean in the world.” Each plot bears a wooden stake detailing the plant’s common and Latin names. If Jefferson mentioned that variety in his writings, the marker includes his initials and the year he referred to it. (For instance, one cluster of green stalks sprouting out of the red Virginia clay are labeled “TJ / 1809 / Tree Onion / Allium cepa var. proliferum.”) “I love researching the literature to figure out what the old-fashioned plants were and how they’ve evolved into what we call them today,” Brodowski says. “For example, Jefferson grew ‘white beets,’ so we’d automatically reach for the white beetroot — but what he really meant was Swiss chard.”

Jefferson, Brodowski says, “was so flexible in his mind— not saying no to anything and just seeing what grows.’

Brodowski’s source materials include period cookbooks and Jefferson’s correspondence, which offers such gems as negotiations with seed merchants and instructions to his daughter Martha, who became mistress of Monticello following her mother’s death. But most precious are the garden records Jefferson kept from 1769 to 1824. “He told his overseer to plant a thimbleful of lettuce every Monday from February to September,” notes Brodowski, who earned a master’s degree from McDaniel College a few years ago with a thesis on Jefferson’s cultivation of salad greens and herbs. “I talk about this all the time, because we know today that lettuce is not going to germinate at over 85 degrees. But Jefferson was trying to ascertain the planting calendar. He’d plant things continually and ask, ‘When does it stop growing? When is it terrible?’ He’d write ‘failure’ consistently through his notes. And you’d look at that and say, ‘Hmm, he was such a failure.’ But no — it was not about failure at all. The plant was just not working in that time frame.”

While the Monticello garden isn’t tended with period equipment — on one blazingly sunny Monday in July, the hills were alive with the sound of the weed whacker — it is organic, using pest-control methods like predatory wasps rather than chemicals. Its crops are heirloom varieties that Jefferson planted (or, if he didn’t specifically mention them, was likely to have grown). But the garden — being, after all, a living thing — isn’t frozen in time. Like the former president himself, its minders have some latitude to experiment. Contemplating the garden’s appeal to visitors, Brodowski notes that it offers a tangible, even sensory link to the Founding Father. “You can go down there and smell the leaves,” she says. “We let people taste things like straw­berries and herbs, peppers, celery. Everybody can relate to food. Even if they’ve only grown a tomato — well, we have nine kinds of tomatoes.”

But did Jefferson actually get his hands dirty? It’s a question that many visitors ask. Brodowski cites a quotation from one of Jefferson’s former slaves, whose reminiscence speaks volumes about the world they both lived in. “For amusement,” Isaac Granger Jefferson recalled, “he would work sometimes in the garden for half an hour in right good earnest in the cool of the evening.”