This summer, New Yorkers could visit a tropical paradise by taking the tram to Roosevelt Island. In a gallery on Main Street, artist Peter Gerakaris ’03 exhibited Tropicália, a work commissioned to celebrate the groundbreaking for the Cornell Tech campus.

The piece — 1,000 square feet of images wrapping around the gallery’s walls and stretching onto the floor — channels themes that Gerakaris often explores. The natural world is represented, with such elements as feathers, mountains, and bees. Tropicália celebrates indigenous cultures, from the Mayan pyramid at Tikal to birdlike carvings from a Pacific Northwest totem pole. There are nods to formal art, including works by Matisse, Bernini’s sculpture of St. Theresa, and Japanese ukiyo-e prints. It’s all depicted in vivid tones and accompanied by a soundtrack heavy on birdsong and drums; visitors could even don 3-D glasses to make certain elements leap off the wall. “One writer called it ‘post-pop botanical,’ and I thought that was fairly apt,” Gerakaris says. “I like to describe it as if you’ve taken elements from nature and filtered them through a pop media kaleidoscope.” 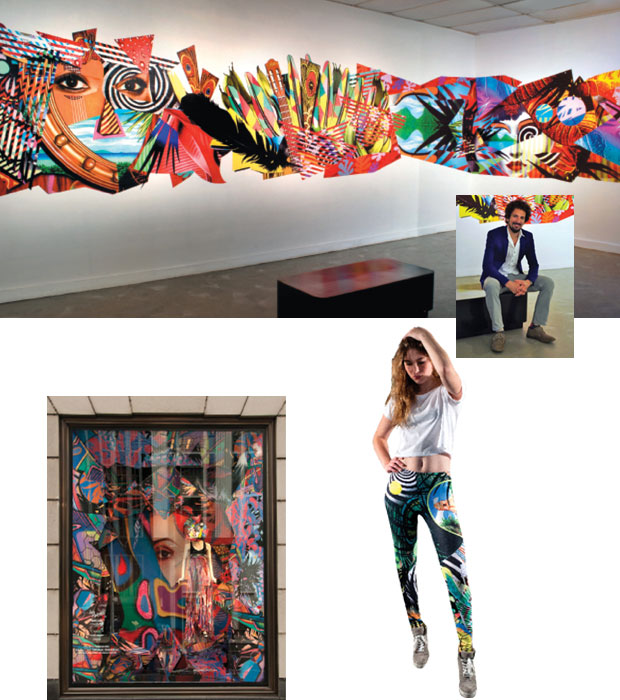 A fine arts major on the Hill, Gerakaris had his first solo show in 2007, an installation at Wave Hill (an arts center in the Bronx) that inte­grated a mural, window gels, and live plants. The State Department purchased a series of his round paintings for its embassy in Gabon. For Fashion Week 2014, he designed a window at Bergdorf Goodman featuring origami-like folded paintings. He has since been tapped for more fashion work, with two projects that echo the themes in Tropicália: a one-piece sold by Australian-based Postcard Swimwear and a line of “art leggings” available from the website Print All Over Me.

Tropicália closed in late July, but the installation lives on in the virtual world. The piece began as paintings that Gerakaris scanned at high resolution, inter­weav­ing and repeating elements — he describes the process as remixing “like a visual D.J.” — to form murals that precisely fit the gallery space. The work was then printed onto sheets of adhesive-backed vinyl and mounted in an eight-day marathon. Although that material was inevitably damaged in its removal, the piece can be endlessly reworked and reprinted to suit other spaces thanks to its digital pro­ven­ance — hence the connection to Cornell Tech, which will move to the island from its temporary home in Chelsea in 2017. I’m primarily an analog person in a digital world, but I could never have made this without technology,” Gerakaris says. “I swear if Michelangelo had had this in his day, he’d be all over it.