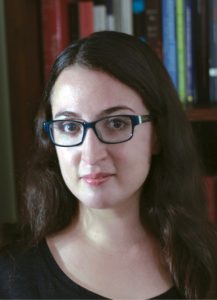 In early September, Professor Kate Manne spoke about her new book on male privilege at an online event organized by a feminist bookstore in Corning, New York. About halfway through the Zoom session, an irate man broke in. “Women have no rights!” he screamed, hurling obscenities until the moderator removed him. Manne calmly continued, informing the group that she’s used to such vitriolic reactions. As she later observed in an interview with CAM: “I’ve always said that trying to draw attention to misogyny almost inevitably attracts more of it. Certainly, those kinds of things being said to me on Twitter is not unusual, and I get a fair amount of hate mail in my inbox. It’s par for the course.”

And Manne—an associate professor of philosophy and a field member in feminist, gender, and sexuality studies—says she won’t let those detractors silence her. She has written essays on such topics as the inhumane treatment of protestors after the fatal shooting of Michael Brown in Ferguson, Missouri, and Tara Reade’s sexual assault allegations against Joe Biden, publishing in outlets including the New York Times, Politico, the Nation, and the Huffington Post. As the Times wrote of her earlier this year: “One of the qualities that makes Manne’s writing bracing and even thrilling to read is her refusal to ingratiate herself by softening the edges of her resolve.”

Manne’s latest book—Entitled: How Male Privilege Hurts Women—is a companion to her 2017 debut, Down Girl: The Logic of Misogyny. It maintains that male entitlement explains an array of problems, from “mansplaining” to healthcare inequities to the unfair burden placed on women when it comes to household chores and child care. She draws a connection to other issues as well, contending that entitlement explains why certain men routinely get away with sexual assault. Manne opens the book with the 2018 Supreme Court confirmation hearings of Brett Kavanaugh, describing his furious responses to allegations that he had attacked college professor Christine Blasey Ford when they were teenagers. “It was dismaying,” she recalls. “He was someone who felt entitled to a position of the highest moral authority in the land despite very credible evidence he’d sexually assaulted someone. I felt it really crystallized both a certain kind of toxic white male entitlement, but also the sympathetic reaction that many people had to him.”

Indeed, Manne coined the term “himpathy” for when male perpetrators of sexual violence are shown more sympathy than their female victims. She believes that’s part of the reason not enough has been done to stamp out sexual harassment and abuse, even with the rise of the #MeToo movement and prosecution of public figures like Harvey Weinstein. In the book she cites the case of Brock Turner, a Stanford student convicted of sexually assaulting an unconscious woman after a party. Despite the fact that he was caught in the act, many people expressed doubt that he could be a rapist. The judge gave Turner a six-month sentence, reasoning that longer prison time could have a “severe impact” on his future. “We’re less comfortable looking at the fact that assault is something often perpetrated by young men who have supposedly bright futures ahead of them,” says Manne. “Equally, we’re more comfortable sympathizing with beautiful, typically white Hollywood actresses who come forward, but we’re less inclined toward women of color and women who are marginalized in other ways.”

Manne argues, too, that male entitlement perpetuates the notion that women are “unelectable.” A supporter of Elizabeth Warren for the Democratic presidential nomination, she outlines her belief that Warren faced “straight-up misogyny and the associated gender biases” during her campaign. Writes Manne: “Unlike their male rivals, women are not entitled to make mistakes. . . . They are not entitled to challenge the narrative put forward by their male counterparts. And while they may be entitled to have power under certain conditions, they are not entitled to actively seek it, nor to take it away from the men they’re up against. Until we face these facts, we will not have a female president.” In a recent opinion piece, the Chicago Tribune called Manne’s interweaving of news stories and cultural touchstones with her own arguments an effective way of presenting an “airtight case against everyday misogyny,” writing that “Entitled helps us better understand all of the things that we should get busy not accepting.”

Growing up outside Melbourne, Australia, Manne wanted to go abroad for college, but to do that she needed to enroll in an International Baccalaureate program. The nearest such program was at an all-boys school that agreed to open its doors to girls. Manne was one of three female students—and the experience wasn’t a good one. Her locker was defaced with sexist slurs, among other harassment. “The school had pretty clear evidence that we were being bullied, and as far as I could tell, did nothing to punish the perpetrators,” she recalls. “It was very much a ‘boys will be boys’ attitude.” Manne ended up staying close to home as an undergrad, studying logic, computer science, and philosophy at the University of Melbourne. “What I loved about philosophy was that you were expected to disagree and be contrary,” she says. “That was the name of the game, rather than something that was socially taboo.” She received her doctorate from MIT in 2011, followed by a junior fellowship at the Harvard Society of Fellows. Then in May 2014, just after she had finished her first year of teaching at Cornell, Manne was deeply disturbed by reports that a twenty-two-year-old man had killed six students at the University of California, Santa Barbara, and injured fourteen others before shooting himself, leaving behind videos and a manifesto detailing his hatred of women. “It reminded me of how vulnerable my female students were to these kind of threats,” she says. “And I was shocked by the way the media was in denial; this was clearly misogyny in action.”

That inspired her to write Down Girl, which won the 2019 American Philosophical Association’s Book Prize. Despite the acclaim, she says she finished that book in a spirit of despair, concerned that others did not take the problem of misogyny seriously. Her feelings have since evolved, partly because she heard from many readers who are eager to combat the issue. Another reason Manne’s view has shifted is because she had her first child—a girl—late last year. (Her husband, Daniel Manne, is a lawyer who lectures at Cornell on intellectual property and gender and the law.) While she isn’t necessarily hopeful that the future will be brighter for her daughter, her birth has inspired Manne to keep pushing society to think deeply about the difficulties that women and girls face. Says Manne: “Having my daughter gave me a sense of renewed purpose.”