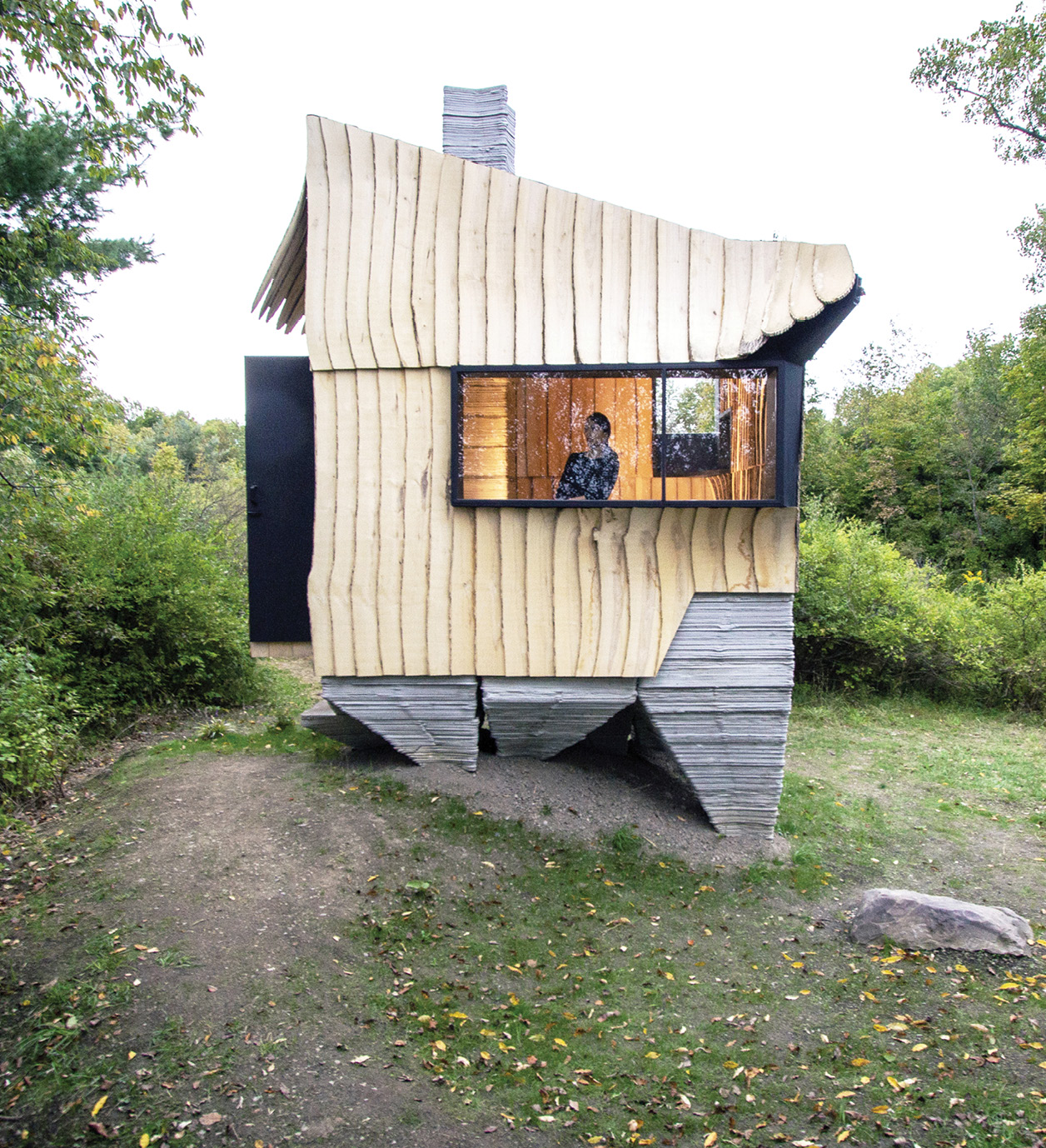 It’s like something out of a hip fairy tale. Nestled in the countryside about fifteen minutes from campus sits a cabin that’s as cozy as it is visually striking. And what’s more, it has an environmentally friendly twist: its exterior was salvaged from trees that fell prey to an invasive insect and would otherwise have decayed, contributing to the planet’s carbon load. The architecture professors who created it—Leslie Lok and Sasa Zivkovic, spouses who also run their own design firm—devised an ingenious method for processing the trees, which had been infested by the dreaded emerald ash borer beetle.

Constructed with the help of architecture students, the cabin was completed in summer 2019. This spring, it was part of a portfolio of work that won Lok and Zivkovic the 2020 Architectural League Prize for Young Architects and Designers. “It’s meant to be a weekend retreat for us,” says Lok, noting that the cabin (which is insulated, though it has no electricity or running water) has played host to a wintertime birthday party as well as warm-weather barbecues. “It has become a gathering spot for us and our close friends.” 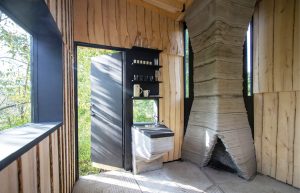 Inside the ten-by-ten-foot structure, the pair have made ingenious use of space, with such amenities as a fireplace, a bench/bed combo, a window seat (Lok’s favorite reading perch) with built-in storage, and a camp sink—complete with chic shelving—that would be at home in a Manhattan studio apartment. Outside, there’s a charcoal grill and two concrete chairs; pointy-shaped but surprisingly comfortable, they’re part of an award-winning series that earned Lok and Zivkovic a 2018 showing in a Queens sculpture park.

For the cabin’s foundation and chimney, the designers employed a novel method of 3D-printing concrete that involves using gravel as a support structure as it dries—allowing them to conserve resources while maximizing design flexibility. The lumber itself came from Cornell’s Arnot Teaching and Research Forest; with the aid of its director, senior Extension associate Peter Smallidge, Lok and Zivkovic selected ten trees to be harvested for the project. As the two explain, the voracious beetle—which has devastated ash trees throughout much of the U.S. since arriving from Asia nearly two decades ago—makes the wood misshapen and useless for conventional construction. But through the use of 3D scanning techniques and a robotically controlled cutting arm, they were able to custom-slice each board for its specific spot on the structure. “This building is deeply informed by these new construction processes,” says Zivkovic. “You take the tree as is and make it a participant in the design. With the robot and the 3D scanning, we can make these odd geometries work.”

Zivkovic (left) and Lok with two of their abstract, 3D-printed chairsJohn Munson/Cornell University

For example, the pair harnessed the natural curve of one log to form a gracefully sloped awning over the entryway; the handle on the front door isn’t a piece of hardware but a serendipitous length of wood, still bearing its bark. As Lok points out, the form of the original trees is still very much present: from particular angles—such as when one looks down the outer wall just to the right of the front door—the individual boards seem to magically come back together. “If you stand here,” she says, “you can almost see the log reconstruct itself.”

Watch this clip from CornellCast about the project: